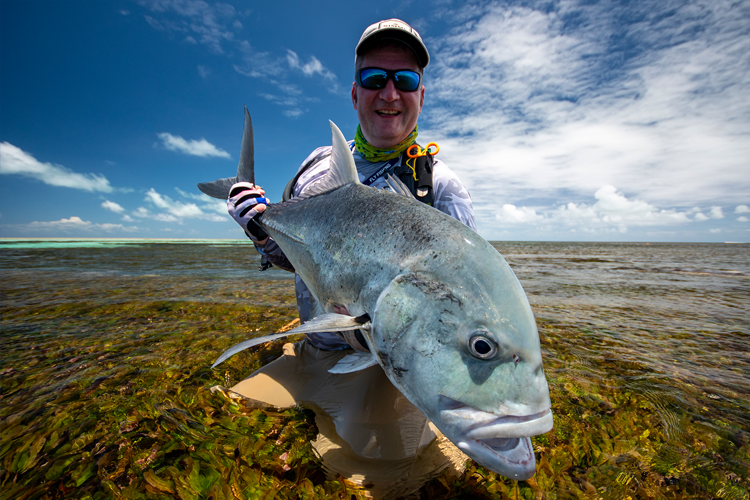 Another fantastic week has finished out at Farquhar Atoll, this week saw a nice mix of species coming to hand, with some very nice sized GT and Bonefish.

Week three saw the return of the AOS team back to Farquhar, with Alexander and Stephan as the groups’ hosts.

We had some extreme spring tides which opened up a lot of areas and flats that can’t usually be fished. This was great as it provided some epic fishing. The wind did blow unpleasantly from time to time, but this did not hinder the spirits or the fishing.

Micheal and Waltruad had a dream start to their week with Michael landing a fantastic 110 cm GT very early on the first morning. Later, Waltraud then caught a 60 cm single Bonefish on turtle grass which preceded to take her deep into her backing. Micheal continued his GT form by landing at least one per day, with the biggest being an impressive catch of 99 cm.

Heinz and Joerg ticked over nicely with some great catches. Joerg sadly had bad luck with a GT well the one-metre-mark that ate his fly. However, Heinz managed to land a great fish of 112 cm.

Total newcomers to the flats, Manual and Gernot had a wonderful introduction to the world of saltwater flats fishing. Gernot managed a great number of species and firsts. Manual however was the standout angler. He not only managed to land many firsts, but he also managed to land a Bumphead Parrotfish, a 105 cm GT and an epic 114 cm GT. The 114 cm being on foot in the surf!

Hosts Stephan and Alex also had a fantastic week. Stephan managed to land a whopping Indo-Pacific Permit measuring 69 cm, certainly one of the fish of the week for sure. He sadly lost a GT well over the one-metre-mark in the surf. Alex’s greatest catch was a Moustache Triggerfish measuring an unbelievable 61 cm, a fish that will be hard to beat as the season goes on.

If you would like to know more about how you can visit and fish at our Farquhar destination, you can full tour page here on our website. If you have any questions about any of our Saltwater fly fishing tours, contact Peter at 01603 407596 or via email at peter@sportquestholidays.com and I will help assist you with your query.