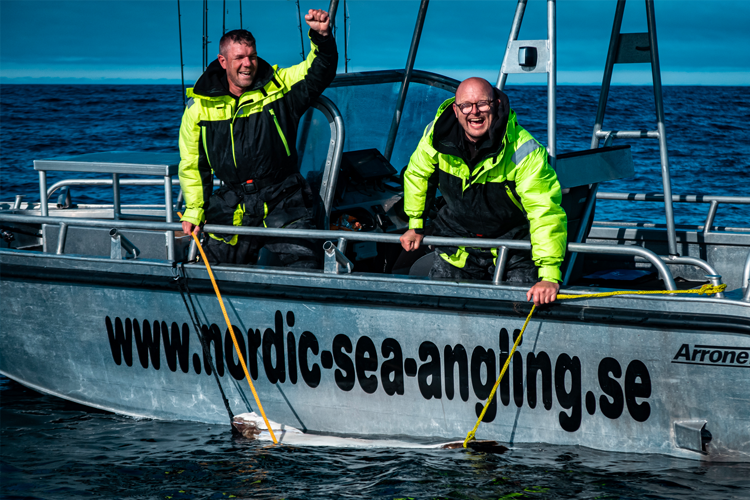 Finally, the weather starts and give way! – Havøysund Fishing Report

Even with the difficult conditions that is being thrown at Norway, the guides still have endless about of spots that can still offer some amazing fishing as can be seen below!

Finally, the weather starts and give way!

We have completed yet another fantastic week, everything from wind to blue sky and 20 degrees. We have had volatile weather up here in Havöysund. The first days we were unfortunately very limited in how we could set up the days. The forecast has said one thing and the weather out there has been the other, it has unfortunately made it very difficult to say how the days are. But something we knew was that the last days would be fantastic, and it turned out to be true…

The fishing for Cod is still completely crazy, we have unfortunately not got a really big one yet but it is just a question of when this will happen. Where we find Cod there we also find Halibut as a nice bonus fish. Perfect if you want to go mixed species fishing. The Halibut fishing has started to really get going. We have had a very nice average weight and also a lot of Plaice in the immediate area.

The first day when the guests came to the camp it was unfortunately very messy out at sea so we decided to stay inside and rest up for tomorrow. At 07:00, we were ready to finally get out to sea when the wind had finally settled somewhat. Halibut fishing was on the schedule for all boats. We went to the place where we plan to fish just over 30min from the camp. All boats are attached to the same place. We have no more time than to let go, boat 5 says that they have a nice fish on the hook. It turned out to be a nice fish of 157 centimetres, the other boats got some nice ones to around 130 centimetres, all boats went in with a smile on their face and were excited about what the rest of the week would have and offer when we got one.

Unfortunately, Friday did not look very bright in terms of fishing or weather. The forecast had announced 18 m / s westerly winds. So it was just fishing in the immediate area as it was too windy to go a few longer distances. The Guide Boat decided to go out into the local area and fish for some Cod. We found some Cod in only a few hours of fishing as it is very difficult to conduct any effective fishing for Halibut or Cod. There were a few boats that went out and took refuge. Then after 4 hours of fishing, there was too much wind so all the boats went in. On Saturday, there would be strong winds in the northwesterly direction so unfortunately, Saturday had to be spent on sharpening the hooks because the rest of the week looked and will be completely nice weather…

On Sunday, most of the boats decided to head north and go after filling the boxes. The guide boat and 3 more boats pulled first and fished for plaice in the immediate area where we had planned and fished Cod after plaice fishing. The Guide boat got a bunch of nice Plaice of 1.5 kg but also got the other boats got some nice Plaice around 1.5 kg. After a few hours, the guide boat decided to fish Cod together with the remaining boats, except for boat 5, which remained to fish for Halibut. The Cod fishing was completely crazy which in its usual form filled the boxes in just a few hours. We had fine Cod around 10-15 kg, until we had a nice Halibut of 122 centimetres, always just as fun with a nice bonus fish . Boat 5 had something completely different in mind, they fished only 20 minutes from the camp where they had had a very good fishing with a fish of 157 centimetres. All boats went in early as there was a long trip on the night to come. A trip we had all been waiting for! Everyone was excited as there had been alot of talk about this session as we were going to experience something good. And it would turn out that it was not just talking, it would become a reality!

Then it was finally dark. The time was 00:00 on Monday. All boats would join in on the long trip. Once we were there after a long drive, it did not take long until one boat says that they start double hooking Halibut, it turns out to be two nice Halibut, both around the meter mark. Then the next boat started shouting on the radio that they were hammering the fish. It was like a choir all night long that went “Now we drill fish again” Very nice song in the ears of a fisherman! Then boat 4 shouted that they were teasing a much bigger fish. it would be a real madam of 162 centimetres who was the top for this night, we caught with fish of 162, 160, 157, 145 and 145 centimetres.
On Tuesday, the target was Halibut for most of the boats that managed to get out on the last day. The guide boat stopped just over 40 minutes from the camp to fish for Halibut. The day started with very tough fishing. But then when the current started to start, there was some activity in the water and the fish started to chop. Quay in the guide boat immediately landed a finer fish on spin fishing gear. And not long after that I caught a small Halibut of around 80 centimetres. There were a few more drifts in this area, and with bad current and a bad feeling in this drift, I made a move and it would turn out to offer results. The first drift offered a nice fish of 121 centimetres to Magnus in the guide boat then shortly afterwards, Kaj gets a nice fish around the meter. There were a total of seven Halibut in the boat in about 2 hours of fishing.

In short, it has been a cruel week with a bit unstable weather. But it was great when we finally got out where we wanted to go! Now we are charging for a new week with new opportunities!