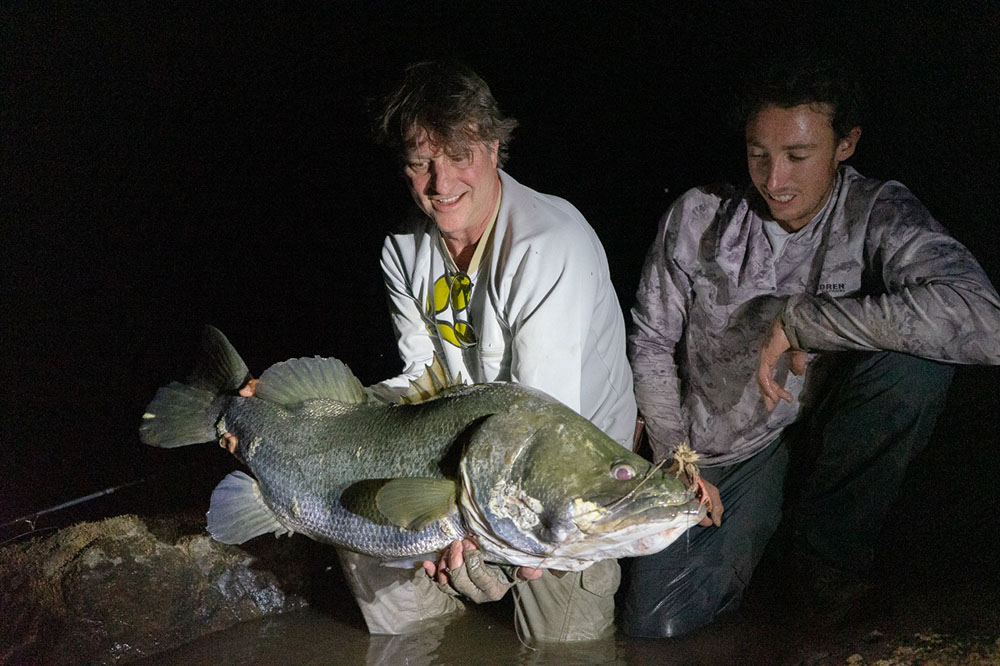 With the 2020 season cut short as covid reared its head for the first time, and 2021 a non-starter, we were eager to get the first trip of the 2022 season at Gassa Camp under the belt.

Not only would this be the first fly fishing on the Faro since March 2020, but we would have 6 days to build a new camp, in a prime site Stu and Greg identified during the course of the 2020 season.

With duffel bags popping with gear, shopping lists lasting for days, and 7 days to get it done,  we arrived in Garoua (Keith, Phil, Greg and Luke) to begin the season preparations. Our two days in Garoua hunting supplies and stocking up on the necessary basics went smoothly and we were soon off to the concession to get cracking.

Five days later, with wary bodies and calloused hands, we enjoyed our first cold beer in the new Gassa Camp, our home for the 2022 season. Gassa Camp is situated on the banks of the Faro River, looking across to the Faro National Park. It comprises four Meru for 4 anglers, each tent integrated into the indigenous riverine forest, allowing guests a direct line to experience, the sights, sounds, and smells of the West African Savannah. The social focus of the camp is a central living area, under a Bedouin tent, which comprises a small lounge, coffee table, dining area, charging station, and fire pit on a river sand beach. The perfect place to watch enjoy sunrise and sunsets, immersed in the bush. Piping hot showers, ice-cold beers, and a talented camp cook working out of a basic bush kitchen make sure our guests stay is as comfortable as can be.

We welcomed Mike and Tim, all the way from Jackson  WY, and Victor Idaho, into camp late on the evening of the 16th of January, for their 7-night stay with us. This trip has been on the cards since 2019, so it was incredibly rewarding to get the guys into camp.

Day one was a leg stretcher and warm up, as we waited for better moon phases to really start digging into the perch fishing. The guys sampled the tigers close to camp, and Mike landed the first (and only) yellowfish of the week. The first afternoon/evening perch fishing was an introduction to what we would be doing for the remainder of the week, and getting accustomed to the intricacies of fly fishing to Nile perch in low light periods.

Rather than a day by day blow of events, here is a summary of the fishing for each of these major target species at Gassa It is not new to us, however every time we kick off a season on the Faro, we are amazed at the diversity of the fishery. And guests feel the same way. Heading out each day fishing 5whts with 16ft leaders, 5X tippet and #16 flies to niger barb, 9 whts to tigers, and 12whts and 66lb fluoro leader to Nile perch is a crazy fly fishing smorgasbord of opportunity. Add the crystal clear river and sight fishing opportunity, the low light/night time flyfishing, and the African wilderness, and guests are treated to a sensory and fly fishing buffet not easily matched anywhere else on the continent. That said, the Faro does not release her prizes easily, and the fact that they are in plain sight makes it an experience that keeps all anglers wanting more.

The tigerfish were feeding aggressively during the camp build, with all the likely looking sections of river holding good numbers of hungry fish. However, as we entered full moon and the arrival of Mike and Tim, they entered a cycle of definite sulking behavior. Although we raised some good fish early in the week, the big fish remained quiet. Both Mike and Tim landed some small specimens during the course of the week, with some better fish coming out on the last 2 days as the moon moved into its 4th quarter. Our 2nd to last morning of tigerfishing we were treated to a taste of what the tigerfishing is like on the Faro; that is sight fishing to quality fish on the shallow sandy sections of the Faro, adjacent to deep water runs. Both Mike and Tim got to fish surface flies on floaters to sighted tigerfish moving in a foot of gin clear water over a sandy bottom.  The last day of the week, the morning produced some good fish as Mike filmed on the drone. The tigerfishing for the week ahead is sure to pick up, and we are excited to see how the new group does

Both Tim and Mike ticked off large-scaled tetra early on the week. These feisty fish love a dry fly and attack them eagerly. Although not reaching any size, they are a beautiful species and great to tick off the box. Tim managed to entice a really good specimen to eat a nymph fished quite deep, which took the prize for biggest tetra of the week.

Niger barb are never easy, and the early season is tougher than the late season as they generally hold a little deeper making sighting and fishing to them trickier. However, sighting fish in the 10 – 20lb daily, combined with their finicky behaviour really had Mike and Tim engaged. I have no doubt their affinity to sight fishing to permit around the globe, translated to their keen focus on niger barb this week. Although we spent cumulatively hours fishing to sighted fish, only one was brought to hand by Mike. Some possibly very subtle eats and a slipped knot (sorry Mike!) were some of the only other results on the Niger barb front. Noticeably, fishing from The Bulge, Tim hooked a massive yellow in a deep slow run which we fought for a good  5 minutes before the hook sadly pulled. We did not get a visual on the fish that ate, but the fish we were sighting in the area were all in the 8 – 15lb range, so no doubt this would have been a really quality specimen. As the waters warm and drop, the niger bard fishing will pick up, so we are looking forward to what the rest of the season brings.

Nile Perch – the star of the show

Nile perch are what bring anglers to Gassa. And this first week of the season certainly didn’t disappoint. Our 2nd evening of the week (first in the good moon phase) had as dug in at le Ministre. As the sun dipped below the tree line, Mike got into the first fish of the evening and trip, a solid 70cm perch to get the ball rolling.  Soon after this, he landed his 2nd. We had a lull in activity prior to another very marked feeding window where both Tim and Mike hooked fish that would have stretched the tape in the 110 – 130cm range. Sadly both were lost to the rocks. Tim then managed to get a beautiful 101cm fish to hand, and Mike followed up with a 97cm fish, before losing one more behemoth deep into the fight when hooked pulled for no apparent reason.

Some highlights of the first night were the site of one of the two big fish Mike hooked coming out the water after its first run, thrashing its huge head and shoulders in the moonlight on the opposite bank, and Keith asking Tim if he was sure he hadn’t hooked a hippo as the monster he hooked started on a  slow steady run, before taking off at speed leaving us in no doubt to what it was. A better intro to fly fishing for Nile perch, we could not have asked for.

The Nile perch fishing for the week continued in this vein. With the guys hooking and landing solid fish each evening.  The bulk of the fish were in the 80 – 100cm range, with a great number of fish in the high 90cm’s. 4 fish of over a meter were landed. The bite was very concentrated around sunset as the moon moved out of full moon on the first few evenings, giving us very definitive feeding windows to work with. As the week progressed, the feeding windows moved later, with us staying out to 10pm on the last night of the week, This resulted in the biggest fish of the week landed. An incredible fish of 112cm, that took off deep into Tim’s backing as it tried to reach a rocky outcrop downstream before time managed to put the brakes on it. One session no one will forget soon was a purple patch that Tim and Phil experienced  PDS, with 9 fishing coming to hand in an hour session on madness, 2 of which broke the 100cm mark.

And so it was, with wary bodies and happy hearts we ended the first week back at Gassa Camp. It certainly delivered, and we could not have asked for better guests to share it with.

Stay tuned for more for the 2022 season.