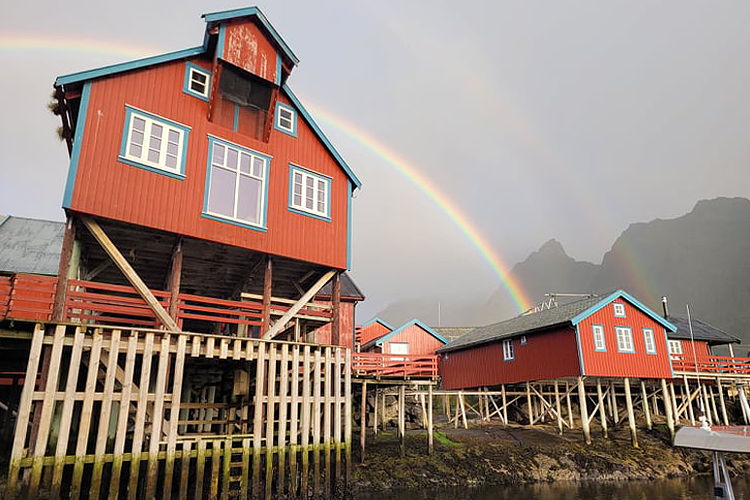 Despite a week of changeable, sometimes challenging weather, our latest group of customers at Å on the Lofoten Islands enjoyed a fantastic week of mixed fishing, which even included a new camp record!

As you will be aware, many of us haven’t travelled for such a long time, and the thought of going through a crowded airport with lots of tests required before travelling was playing on everyone’s mind. But it couldn’t have been further from the truth. It was surprisingly straightforward, and thanks to the advice from the guys in the Sportquest offices, everyone managed to check in as usual. No tests were required for us to leave the UK, and there were hardly any queues, which gave us plenty of time to meet up and have a beer before boarding. The only difference from any previous regular trip was that face masks were required around the airport and on the plane, which wasn’t too much hassle in the grand scheme of things.

Arriving in Oslo was just as straightforward. We just had to ensure we were in the correct queue to show off our passports and covid pass, which probably only took around ten minutes from start to finish. I must admit I was very impressed with how effortless the whole process was.

All the transfer and overnight stay in the Oslo airport hotel were as previous years, and the connecting flight was also a breeze, thanks to how quiet the airport had been. The ferry from Bodo to Å was also the same, with the added bonus that masks weren’t required.

On arrival, our cabin was a hive of excitement, with everything comparing fishing tackle and rigging up ready for the first mornings fishing – the expectation was high! Unfortunately, the weather for the next day didn’t look great and the week looked very up and down, but we kept our hopes high in true British spirit.

Day 1
Unfortunately, the forecast we’d seen the previous evening was correct, and the weather stopped us from getting out on the first morning. However, we took this opportunity to go to the local supermarket to stock up on food and supplies for the week. When we returned from the shop around lunchtime, we were greeted with the news that everyone had been willing and waiting to hear; the boats were heading out!

The sea state was a little choppy, but we managed to punch our way down to the stream for the Halibut. After a few hours of drifting, the guide boat radioed over, and they’d been successful, landing three Halibut with two close to the 100cm mark and one measuring in at 113cm.

We struggled a little on our boat, so we decided to try something different in some calmer waters closer to the shore, swapping our Halibut tackle for some 180g Sandeel shads designed for Coalfish. Casting these away from the boat and retrieving in short sharp bursts, we soon started to get amongst the fish, and for two hours, we enjoyed some fantastic sport on light tackle. The fish weren’t massive, around 10lb to 20lb, but it was brilliant fun; a Halibut of 90cm also made an appearance which was a welcomed bonus. Shortly after, we headed back to the camp for some well-deserved food.

Day 2
The weather was much better, so it was decided we’d motor further to the north and try for Cod, enabling the guys to fill their cool boxes in case the weather limited the week ahead. To cut a long story short, we had loads of Cod between 5lb to 25lb and a very successful day. Initially, we struggled to get through the small fish until I had the idea of hooking a baitfish sized Coalfish on the pirk and leaving it down there. This worked very well, and we gradually upped the average size of the fish we were catching. That afternoon we headed back to the camp with lots of filleting to do and with a boat full of happy anglers.

It’s worth noting that the north side of the Lofoten islands are very exposed and so very dependent on the wind direction, luckily on this day, it was calm enough to head round there safely.

Day 3
Unfortunately, in the morning, the weather was nasty, and we couldn’t get out, so we went and did a bit of sightseeing along the coast. However, thankfully, the wind dropped later that day, and we got the call that we could go out. It was a mad dash to get organised, but soon we were out casting shads to the shoreline for Pollock. Once again, it was a thoroughly enjoyable few hours fishing, with both good sizes and numbers of fish falling to both boats. The camp record was also broken, as one of the guys managed a Pollock of 17lb or 98cm.

Day 4
Like the previous day, this day started the same, with some unsavoury weather. We did go out and try to battle the elements, and we even managed a few fish, but eventually, conditions got the better of us. Later that day, miraculously, the wind changed direction and dropped, so we made another mad dash to get out. It was worth it too, as we found some lovely Coalfish to 27lb on our lures.

Day 5 & 6
The remaining days were very similar, with short windows of opportunity between the weather. More Halibut were caught, but all under the 1m mark, along with a few different species like Ling and Haddock.

Final Night
We finished the week with a traditional final evening meal in the restaurant and a few beers. It had been a hard week weather-wise, but it was still thoroughly enjoyable, and Alexander and I would like to thank all the guys who fished with us. The weather is something we cannot control, and most people completely understand that. When you’ve dealt with these cards, it’s the reaction to these circumstances that dictate the type of holiday you have.

I’m now sitting here having a well-deserved rest after saying farewell to my first week of customers, with the second group arriving tonight at 9.00 pm. The weather is looking much better, so fingers crossed we can connect with some true giants.