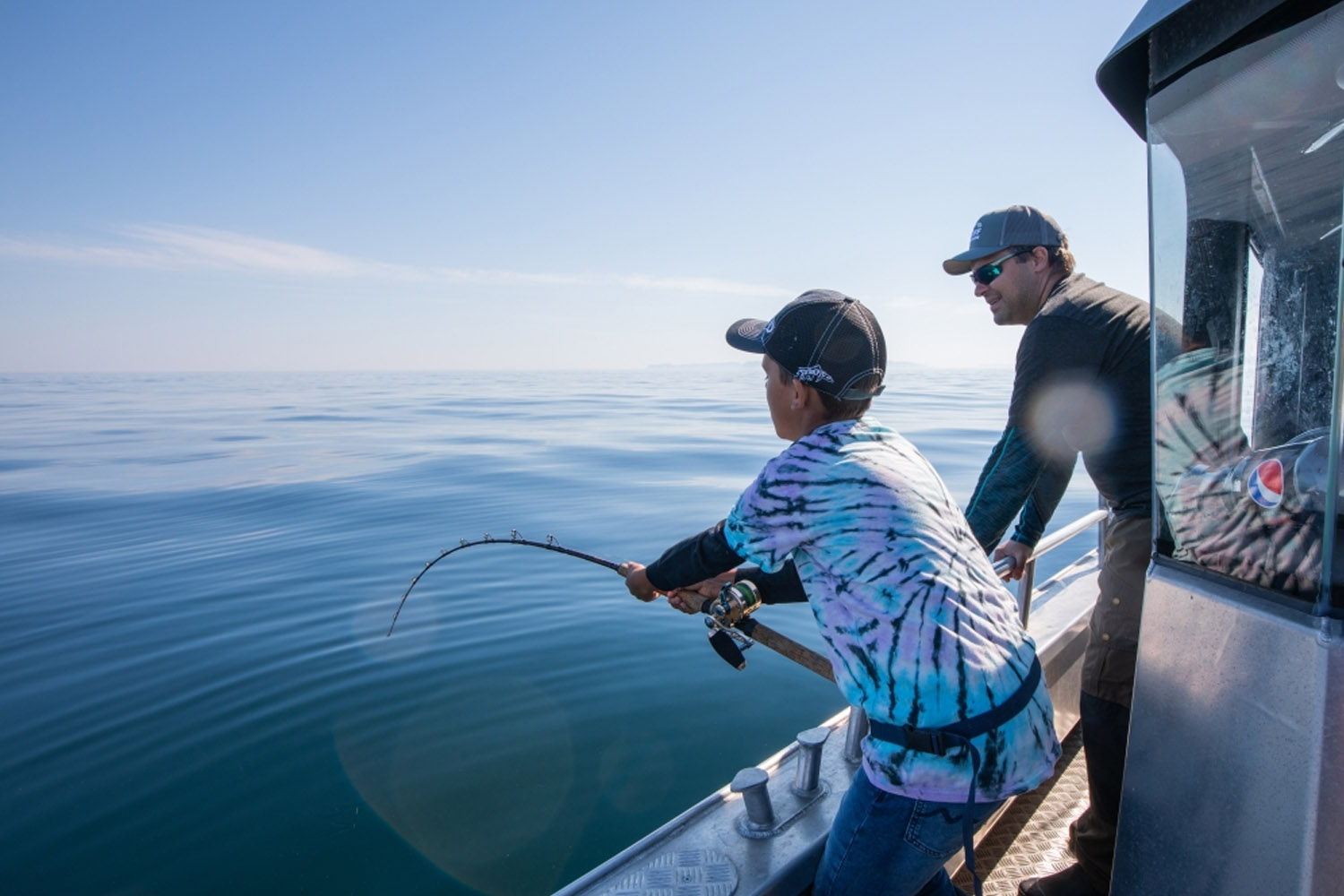 This week it will be a shorter news when Guidebåten’s guests were prevented a few days before they were to go, this has meant that we have not been out at sea as much as we otherwise would and therefore we do not have as many pictures to offer from this week.
This week’s weather and fishing have not disappointed us anyway, already the first day Smackar in boat 4 in a fantastic fish that after a couple of good rushes down to the bottom could be measured to a nice 155cm. Daniel, who guided boat 9 with Fredrik in the lead, shortly afterwards had a brutally large Halibut that followed on the plumb line for several minutes before it came off, no luck this time but the adrenaline was worth it. When Strömmen died off, Douglas made a move with his guests towards a bay and after a little wear and tear could smack up a Halibut around the meter mark on spin fishing, they continued to fish but unfortunately they were difficult and only pinched the jigs carefully.

The other day the weather forecast promised a tropical climate, Danne and Dogge then decided to take the opportunity and explore a whole new area near some old favorite places, the clock was set at 03:00 and the coffee was charged since the day before, down by the boats we were met with a mirror-shiny water and clear blue sky, we looked at each other and thought a bit about whether sunscreen might be needed, but we did not have time to fix it so we stuck out without it…

The day for us starts relatively tough, we do not really get the drives we wanted and it does not feel quite right, we drag on our bait fish in the 4 kilo class for 6 more hours when we actually give up the plan and look further towards the areas we know from before are really hot. Two drives go and only an interesting riser on the plumb line, we instead cook some food and wait for the rising tide where we can hopefully get a little more action. The plan works and already the first drift after the meal, fish on for Douglas and after a fun fight in the nice weather, a fish of 148cm could be landed, some good pictures in the sun and after that a new drift is laid over the same area. Shortly afterwards, Danne misses a really nice fish, they decide to take one last run before they had to roll in and meet a new group of guests inside the harbor.

Otherwise this week it has continued to be stable Cod fishing with a lot of fish up to a 15 kilos for the guests, filling some Cod in the box has not directly been a problem so to speak. On the Halibut front this week, you have had to wear out properly and when you get one, they are usually quite small, sometimes you can run the same drift several times before hooking up. No giants this week but still a whole bunch of fish with several around 130 with the largest at 138cm for the guests.

Another fun thing yesterday, when Danne drove a group of guests on a little Cod fishing trip, Elias, who is 11 years old, managed to catch a nice Cod of 137cm with an estimated weight of around 20 kilos. Elias himself is 142cm tall so you can imagine what the proportions looked like when he was holding the fish, in addition to this Elias kinged up quantities of Cod around 5-10 kilos and both Haddock, Pollock and Coalfish, clearly fun with new species to add on the list for Elias.

Now Douglas is rolling on Holiday and Andreas is coming back, the weather looks promising and this week we will do our best, we can promise.