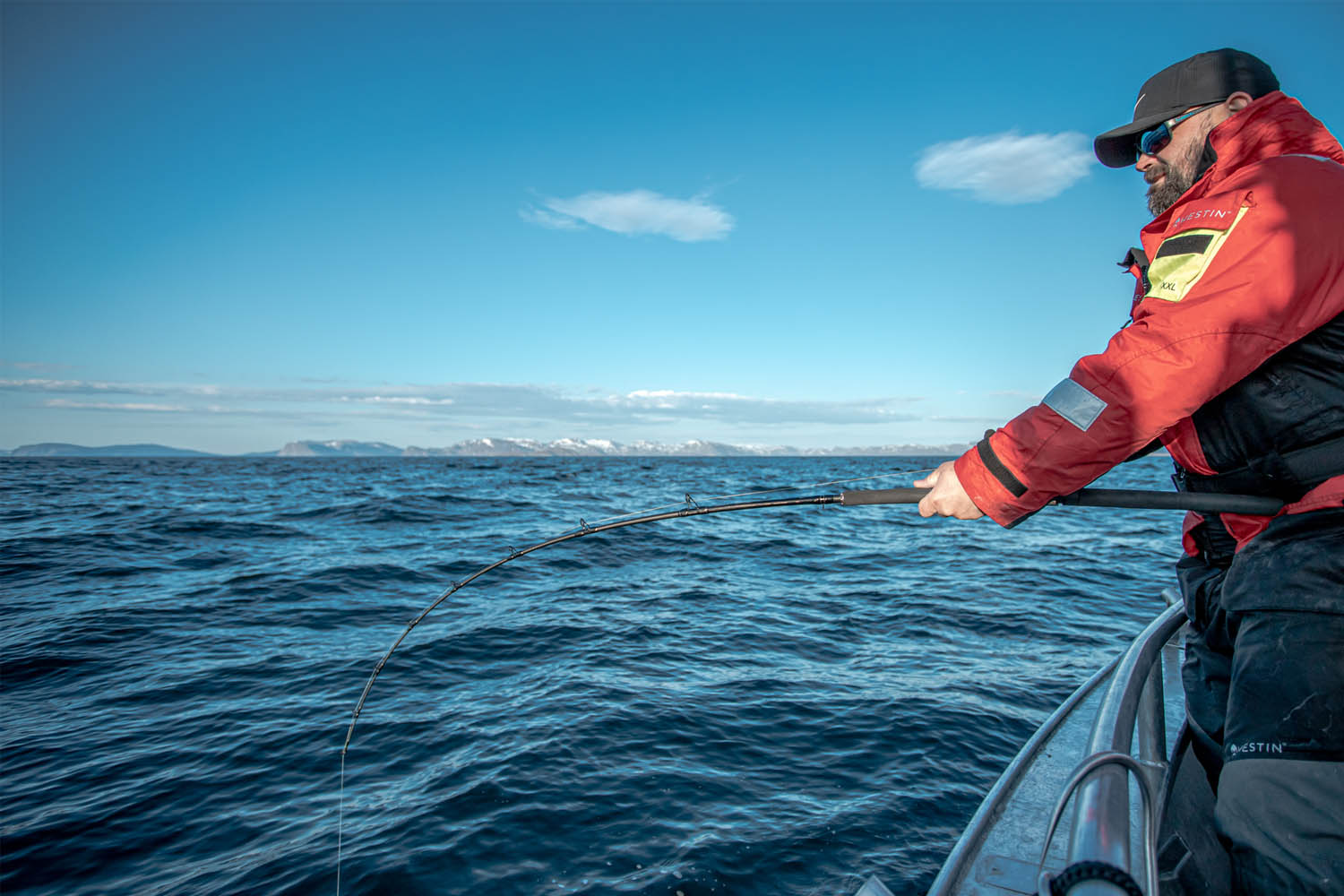 We started a new week up here in Halibut paradise, Havöysund, and what a great start it was this week. We were treated to completely fabulous weather that was more reminiscent of the Maldives than northern Norway and it really gives incredible energy and atmosphere, especially when the fishing is at its peak, and the big ladies are here and want to play.

Our plan in the guide boat was to pound some Cod at the beginning of the day to get warmed up and then time the current and go on the Halibut when the tide was right. We lay 3 boats scattered in the area and it definitely hung a special feeling in the air. I set up the day’s first Halibut drift inside a nice gutter right next to a shallow top that ended up against a sand cave and the guys in the guide boat had previously told me how amazingly wonderful it was to see someone in the gang tease a Halibut up. Without building up the expectations “too” much, I may have said something like “you do not have to worry” rather than a more nuanced answer like “we can do our best”…

We drove ideally below the top and all of a sudden, something sucked on Bengan’s baitfish and stood completely still and held it, a pretty good while passed without the fish moving, but in the end it did and Bengan put the circle hook in a steady fish that pulled away, at the same time we all thought it was small, it sped away like a bullet! A completely euphoric hysteria broke out in the boat and I quickly realized that it was two really nice fish we had hooked! The fight went surprisingly completely painlessly and the fish kept away from each other all the time, once it was finished stirring one of the fish and it came up so I could land, we measured it to 151 nice centimeters, and based on the fighters I had calculated that it was the “smaller” fish of the two. It turned out that this was the case when we finally landed Nisse’s fish and measured it at 155 centimeters, completely sick and what a crazy start to the week for the guys in the guide boat, both fish of course got the freedom again and swam nicely on.

At the same time over to the Dutch in boat 11, they had hooked something REALLY big, they reported on the radio that they had had a really fat fish up by the boat once and that it was a fish up to 2 meters! The excitement was unbearable and without knowing too much about how the fight had gone, he had at least managed to land the incredible fish and measure it to a fantastic 205 centimeters! This could not have started better and as if that were not enough, at the same time not far away they had hooked another large Halibut in Andreas’ boat, a fish that absolutely did not want to follow up without a fight and turned many times 10 meters under the boat .

During the second day, the wind was really good and the fishing was conducted in the immediate area for a few hours with a more mediocre result, but a 120 centimeter Halibut that was landed is a really big win in bad weather. So with that said, we move on to yesterday where we went from really strong easterly winds during the day to mirror-bright sea during the evening for a short period. I took the guide boat on a Plaice fishing adventure during the day while waiting to get away to nice Halibut places during the evening, which was a good move. We had a super nice Plaice fishing and got a really good number of fish, many of them in a nice food size between 1 to 1.5 kilos and as the icing on the cake, Nisse got a real cannon Plaice of 2.1 kilos. Everyone thought it was really fun and according to the forecast, the wind finally settled and we pounded away for Halibut! Arriving at the first spot, we were just in the shift where the current had just started to move and it was almost immediately on Bengan’s bait fish, but after the fish pulled away for a while and it was time to take it, the fish somehow managed to loosen . We continued to fish and we had many contacts with Halibut where they held the victories and we pulled most of the hooks out of their mouths and got torn up bait fish, so I decided after a couple of hours to catch up with the current on a instead make a move to another area in the hope that they devoured the baits better there, and of course they did…

Once there, the first drift gave nothing but the second drift went down into a hole where a hungry fish was waiting , it took Mattias bait and began to pull away, this time with speed and Mattias who dreamed so long after being fought with a Halibut broke out in complete happiness when he hooked the fish and it crashed away with a completely crazy first rush. The fight was brutal, the fish was really strong and in the end I managed to land the messy fish and measure it to 143 centimeters, really fun and Mattias was completely overjoyed. I had at the moment of hooking marked the position in the GPS and the other drift I put up in the hope that there would be another in the same place, the operation managed to go EXACTLY over the marking and just then it cuts on Stefan’s bait and he sets the hook, the fish did not make a fuss and Stefan started to lift the fish from the bottom and it followed without any problems, I was prepared for a Halibut of smaller size but when it approached the surface I see a really fat fish and without hesitation we land the fish immediately! Everyone burst out laughing with joy and no one understood anything when all of a sudden there was a cannon of fish measuring 160 centimeters along the boat’s edge!

Now the fishing on fire is really up here and we reckon coldly that this was not the last fat Halibut that saw the boat edge for this week, now we drive!