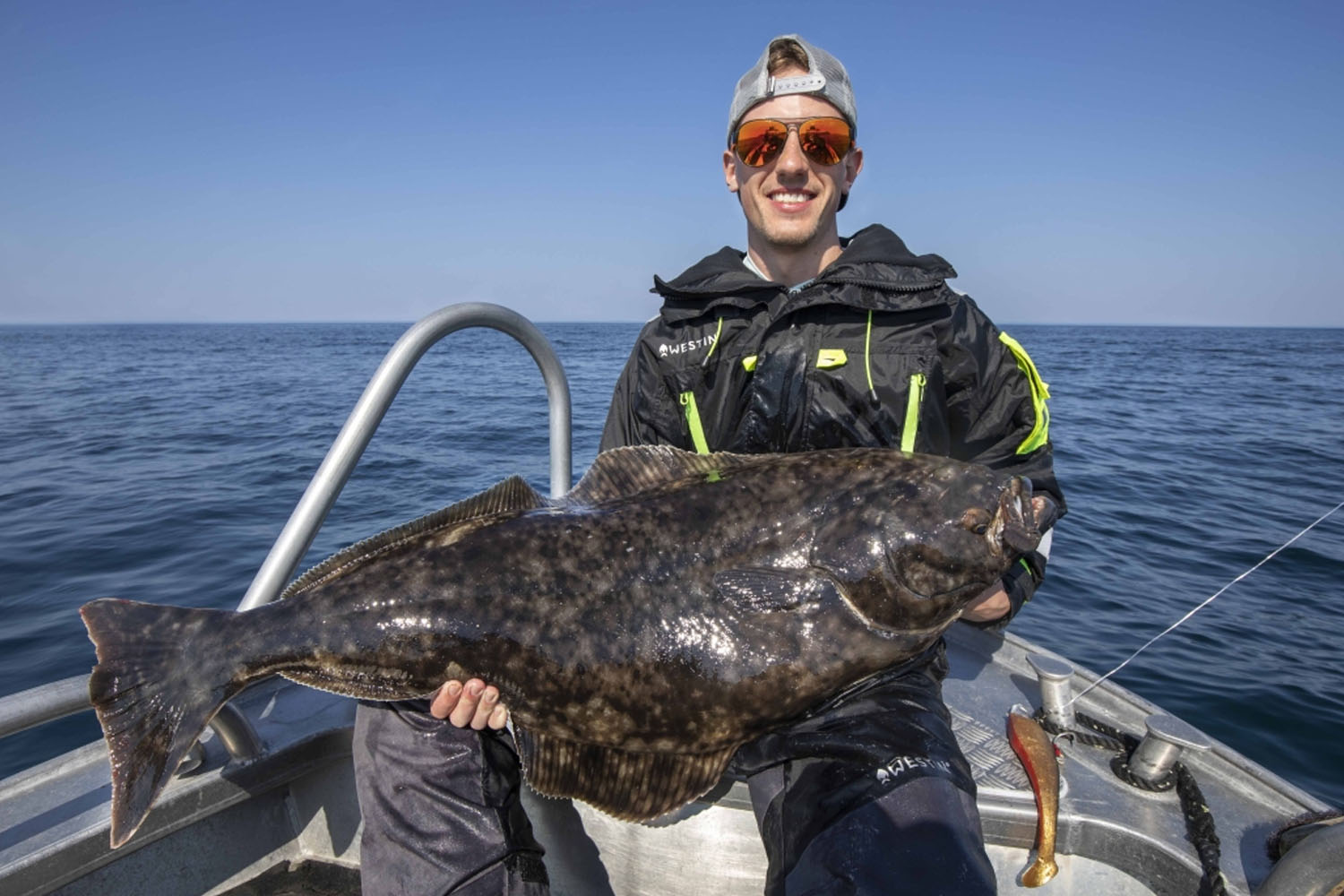 This week at Havoysund has once again offered completely magical weather, the first three days with 20-30 degrees around the clock and the last with a slightly milder climate of around 15 degrees. This week started a little differently from previous weeks when some were already in place the day before while the other half arrived the same day as planned. The first day for the guests this week was really nice weather-wise, the forecast showed quite windy but in Havöysund you almost always come out as we can go in all directions. The fishing for the boats started relatively tough, no speed in the water and no interested Halibut on the plumb line.

Andreas who drove the guide boat managed after a while to get a really nice drift where it was just a matter of time before it would come big, as I said a bit into the operation, Andreas can see how one of the guests’ rods signals a really nice fish, the rigs are messy in the currents but after a while under hard pressure they manage to lift the fish from the bottom. Andreas catches a glimpse and prepares for landing, the fish has other plans and turns just below the boat and makes a mad ripple where unfortunately both rod and line explode at the same moment, boring but fishing is fishing, Andreas appreciated this fish somewhere between 160-170cm.

Some distance away are Affe, Mange and Fredde and harrowing along an edge, Affe shows the way and hooks the first of the day on the jig the second after hooks Fredrik on the same train and now they both stand with two Halibut in the summer heat. The first is landed gallantly and the other for some strange reason is very difficult to put the Halibut hook in, after a smoother gill grip they could lift in number two which seems to be built mirror-inverted ?? This is something I have never before, or at least never before thought of. Check out the pictures below and you can see that one is mirrored.

Day two showed a ridiculously good weather forecast and that meant there would be a long trip. The alarm was set at 03:00 and the guests would meet for departure at 04:00, the early morning is like a warm June evening and yes we understood enough directly that this day would be completely magical. After a quick stop for bait fishing, we finally drove the last distance to the fishing area, first operation Miss Danne’s boat misses a fine fish on spin fishing gear. Danne plans and changes area to one with a little more speed on the water, the sonar shows neat echoes on our jigs and from nowhere the first Halibut enters the plumb line Magnus shows the way and takes two quick crank strokes followed by a karate blow which results in a good rod bend, a fun fight later, Danne can land Magnus’ first Halibut at a neat 121cm!

The operation after, Danne said that he would hook in a better fish on jig to Fredrik and barely a minute into the operation he can see how a finer fish slides in on the sonar image, Danne cranks up fast followed by a shock, the fish shows interest but misses the jig, Fredrik grabs the rod and is followed by a really good rush, talk about good fishing in the boat. The fish turns down to the bottom a couple of times to then be able to secured and measured to a furious 145cm! a nice shot and some lovely paddle splashes later, we see how she swims down into the depths again.

The drift after, strange things start to happen, Magnus gets a nice Plaice of 52cm followed by Affe who hooks another on the jig at 58cm, what happens we think… a few minutes go and then Jakob in boat 2 reports a new camp record of plaice at a completely sick 3.82kg and a length of 64cm. This is very interesting as we got the Plaice in the exact same place, next time we go there we will of course bring equipment to test this in that area.

After the operation, Danne and the gang were able to dot the Halibut again and after Fredrik smacked a 110 on the spin, Magnus and Fredrik get a double blow, talk about chaos when the Halibut hook is on the other side of the boat and the Halibut come up to the boat at the same time. After they were photographed with their good double shot. After that, the guys in the boat drove at the same speed and could after two intense hours with several contacts and many landed, feel satisfied with the mass fishing and being able to meet a really big Halibut.

Andreas who meated well started the day by landing a nice flounder of 142cm in the guide boat followed by a couple of fast little smaller fish of between 120-130cm, really good cuts where it was really the spin fishing that delivered for them! We have said it before but this with spin fishing for Halibut is really something completely magical, and to experience. This largely tropical climate up here in the north is just absolutely amazing! So do not forget the spin fishing stuff at home when you go and visit our camp in Havöysund.

Otherwise This Day it was a Mixed result where boats 3 and 9 managed to hit really nice fish which unfortunately won the battle. Finally boat 9 could report a magic fish of 156 handsome cm, they continue and shortly afterwards lands a nice fish in the around 140cm class.
Jakob who is here with his son Elias 11 years had the first days fishing for the Halibut, after just under 10 minutes at sea yesterday Jakob was able to land a fish of around the meter followed by their companion who slammed a nice 125! Now all eyes were on Elias who had just decided on a big Halibut this trip! He puts out a rod with him in a little deeper water and after a while can feel how something attacks the bait fish, he lets go and then cranks up the circle hook like the pro he is! A magical fight takes place and after a few furious rushes, his dad can secure and Land his new PB AT 136cm, Congratulations Elias from all of us at the NSA and what an achievement by a guy of only 11 years!

This week has been really challenging where you really have to be in the right area at the right time. but if you spend time in the hot areas, the chopping period will come sooner or later and then you really get to experience an absolutely fantastic fishing for Halibut.

The weather next week looks incredible again and with the clear water that came yesterday, it is built for success, INTO THE TILE!