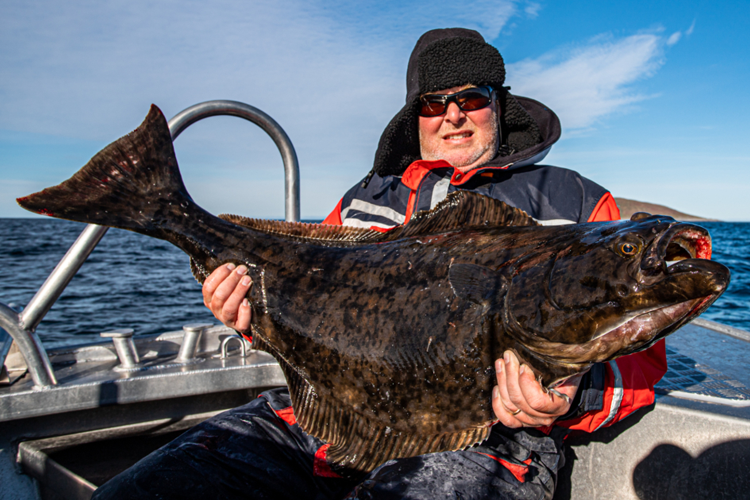 Time flies when you’re having fun! Another fantastic week in Havoysund has passed, and as usual, it was fish-filled, with lots of nice Halibut of all sizes!

During the early part of the week, the weather was very mixed, and as always, this time of year, the darkness seems to creep in faster and faster each day. Overall we’ve managed to get out each day, but there have been odd occasions when we’ve sheltered from the weather.

On the first day of fishing, the sea was a little choppy, but not enough to stop us from travelling to some of the really hot marks. I was in the guide boat, and we were going big Halibut hunting! To cut a long story short no monsters came our way, but Stefan landed a nice fish of 122cm and Ulf one of 119cm. The Danish anglers in boat three, who were spin fishing for them, also had a good day, landing eight good fish with the biggest measuring 125cm. Spin fishing is an excellent technique for Halibut, especially if you like being active and want good numbers of fish!

On the second day, we were blown out in the morning but managed a few hours fishing in some harsh conditions in the afternoon. This resulted in a couple of Halibut landed, with Ulf landing the biggest, measuring between 120cm and 130cm. Unfortunately, the wind and waves made it difficult for us to accurately measure the fish while it was still in the water.

On Saturday, good weather prevailed, and we all set off on a new big fish adventure. I had the honour of guiding our Dutch guests Rick and Sven in boat eleven and went off for a day of mixed fishing for Halibut and Cod.

On the second drift of the day, Mikael hooked into a very good fish that fought hard and measured 142cm – his PB Halibut and his first of the species! Stefan Magnusson followed with a fish of 138cm before Mattias commenced battle with a true giant, but unfortunately, the hooks pulled, silencing the whole guide boat – it was obviously a proper big fish.

I carried on fishing with Rick and Sven, working my hardest to drop them onto something special and make something happen. Finally, after lots of trying and a few small fish later, Sven hooked into the one we’d been looking for. After an epic battle in the crystal clear water, a fish of 157cm broke the surface and was safely steered to the side of the boat. After what had been a slightly challenging day, it was magical to see his face and to see such a fish. When we entered the harbour that evening, we heard the news that many Halibut had been caught, along with some lovely Cod to over 26kg!

The following day, while many of the boats enjoyed some Cod fishing, we tested a relatively untouched area for Halibut. We didn’t have to wait too long for some action, and on our first drift, we boated two Halibut back to back, with Magnusson landing both fish which measured 122cm and 129cm. Unfortunately, as the morning progressed, the wind increased and made drifting effectively very difficult. Only one more Halibut followed, a fish of 110cm for Mattias.

The forecast for Monday was not good, but the bad weather never materialised, as we enjoyed clear blue skies and light winds. We Cod fished for much of the day, landing plenty between 10kg and 15kg, while Magnusson on the guide boat managed a single Halibut of 145cm.

Tuesday was the last day of fishing and was also an excellent day weather-wise. It had been a good week, but what was missing was a really big fish for the anglers in the guide boat. We fished hard all day and battled through some smaller fish until we found “the one”! Drifting an area reasonably close to camp, over a hilly bottom, packed with baitfish, Magnusson set the hook into a ‘proper one’. After a dramatic fight, a new PB of 153cm was measured and released. It wasn’t long before Mattias was soon in on the action, too, and once again, it looked like a really good fish, but unfortunately, it wasn’t to be as it spat the hooks.

Now we’re currently recharging our batteries and getting ready for the next set of anglers, with 43 guests coming from Holland and Belgium for the Penn Festival week.