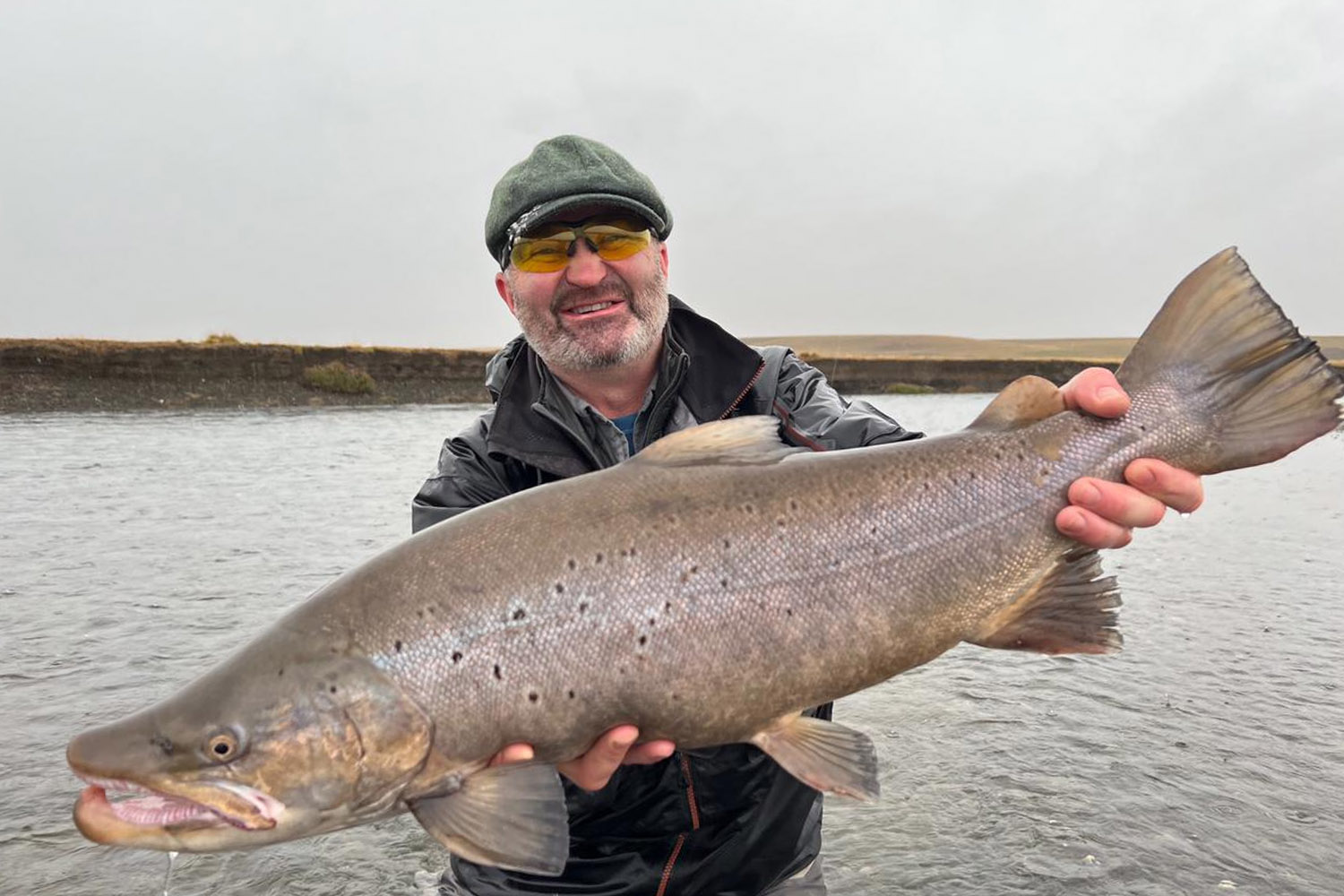 Rain had finally arrived here at Kau Tapen and an eager group of guides and guests from the USA, UK, and France were excited to see what the river had in store for all. While the last session of the previous week had dirty water, the question waiting to be answered was if it had cleared enough. All left with high hopes for the warmup session and the answer came quickly, a double hookup for Richard and Simon within their first three casts!

During the first full day, promising results poured in from both the Grande and Menendez. Simon and Tom hooked seven fish between them for the morning and a further seven in the evening session, the largest being a beautiful fresh fish of 15 pounds. Some of our less “famous” or well-known pools truly came into shape and we were able to find fish where they had not been previously hooked this season. It seemed that if one covered the water correctly, aggressive takes were the result. Howard landed a 19 pounder and a few others doing exactly this from a pool that we had not been fishing in the low water.

The next day produced what has probably been the best action of the season thus far. Between our anglers, 47 Sea Trout were hooked, including some behemoth specimens. The catch report sheet filled up quickly and there were a few highlights to mention. Howard’s first cast fish of 14 pounds set the day in terms of action and Michael’s fin perfect 17 pounder was a sight to behold. In the same beat, he hooked and lost a much larger fish as well that ran straight into one of the river’s many grass clumps after taking a few hundred yards of line straight into the backing. In the evening, Rupert landed what would be the fish of the week, a 26 pound male of 94x55cm. This fish stayed down and dirty, jumping only once although he could not get his entire body out of the water. This is the time of year when the larger males become more aggressive to the fly and the influx of bright fish during the rise has certainly stirred them up a bit.

Tuesday provided more of the same action, which was even hindered in the morning by strong upstream winds. Some guests headed to the Menendez with single-hand rods, while others braved the Grande in a few protected pools. Micheal had a brilliant session in the evening, hooking quite a few fish and landing three up to 14 pounds. Howard and Rupert tore up the Menendez as well landing fish of 16 and 18 pounds respectively.

What also occurred the previous day was more rain, both here and in the headwaters. It started in the morning and did not stop until late at night, turning into a torrential downpour at times. We anticipated a rise, but it oftentimes takes a bit for the high and dirty water to reach us. The morning fished quite well again, but during the evening session news came from the upmost beats that the river was coming up rapidly with lots of debris as well. Those in the lower beats hooked fish, including a 17 pounder for Tom among many others.

When we awoke the next morning after the rise to check the lower river, it was indeed extremely high and dirty. The Menendez and Grande were almost unrecognizable. We had been hoping for water for months and here it was, all within the span of a few days. All parties went to check the river for both sessions, but there were no fish to be had for the day.

There was a small window on the morning of the final day with clean enough water to make an effort to fish. This lasted about two hours before the river continued to rise further. Willy landed what would be our last fish of the week, a fresh 10 pounder, and his excitement was palpable. As fishing guides and fly fishermen, we are subject to the will of nature and in the case of a rise like this, we hope it brings in more fresh Sea Trout and provides them with a healthy amount of water for the remainder of the season. We are also thankful that we got to enjoy what has been some of the most productive days of the season earlier this week. As for now, the water has started to drop and the next group is awaited to arrive. Hopefully, it clears a bit more to provide some solid action for all!

Thanks to all from around the world for joining us on this special fishery and we hope to see you on the water soon.
Tight Lines,
Max Kantor – Kau Tapen Guide 2021/22

If you would like to learn more about this tour including the latest availability, you can visit the full Kau Tapen tour page here on our website, If however, you would like to discuss this with a member of our fly fishing team, you can contact them via 01603 407596 or by emailing peter@sportquestholidays.com.