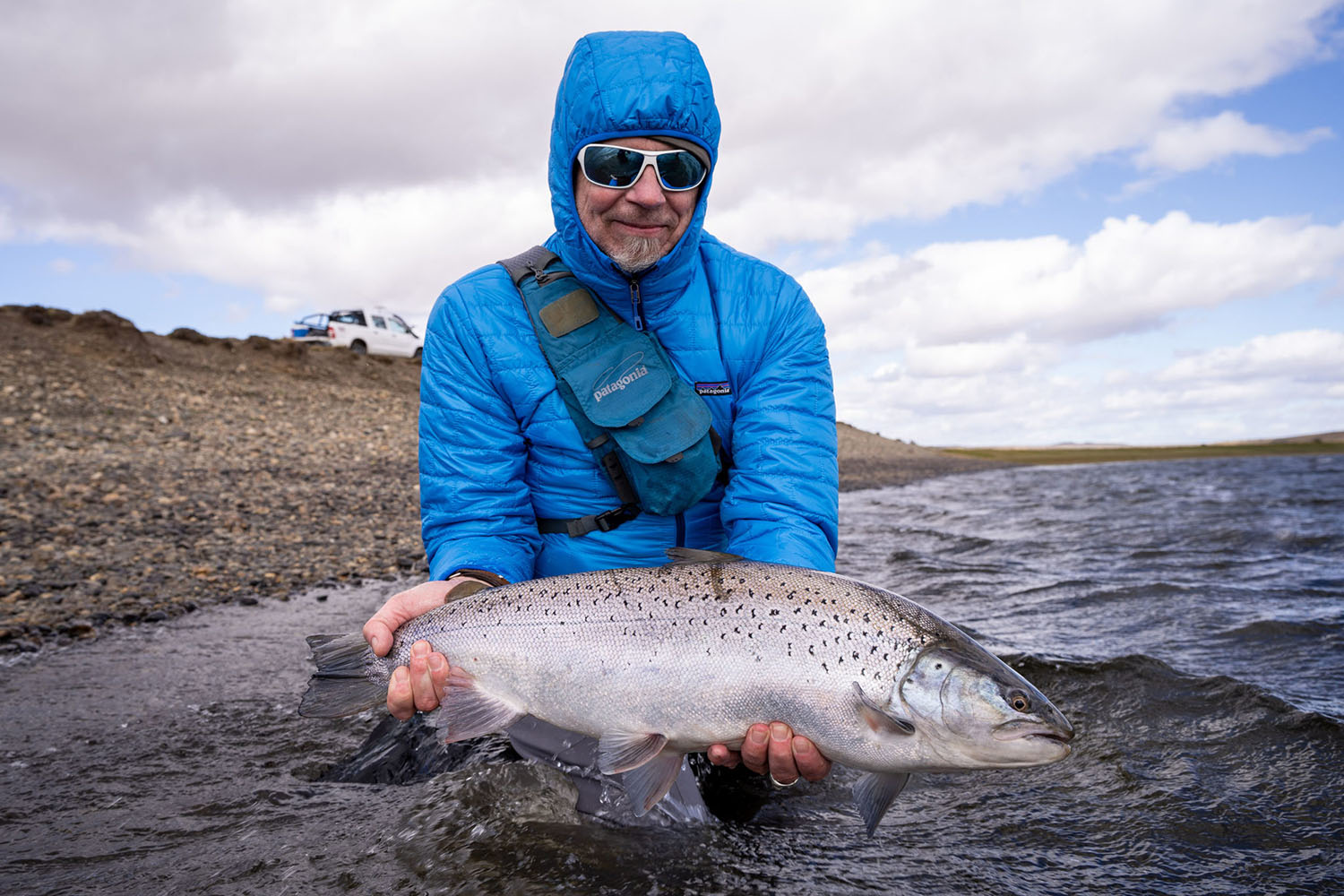 February has arrived and we are very pleased with how the season is developing here in Las Buitreras. Although the water level has been on the low side for a long time now, the fishing remains good, producing consistent numbers. So far we’ve mostly been sticking to our proven tactics in these conditions, mixed up with some methods and flies that we normally don’t try on these water levels. For week 5 we welcomed a group of primarily Swedish anglers, topped off with some American and British flavours. Most of the anglers this week were here for the first time but we also had some returning clients ready to show off some old tricks they learned here in the past. As many Scandinavian groups, we have here, almost every guest had at least some experience from Salmon fishing and spey casting.

The group came out guns blazing and had 13 fish landed the first day, the biggest weighing in at 15 lbs. What a start! The river was low but fishing felt really hot with wind from the right direction, helping to create a cover for the fish which always helps us to present the fly in the right way. Being able to straighten the leader in a 45 or so degree angle makes a big difference when fishing here and having some wind in the back definitely helps with that. These favourable conditions were also key when Alex, on his first attempt at fly fishing, managed to land a dream fish in pool 75. Alex, here with his uncle Paul who’s been fishing with us many times before, learned to cast quickly and on his second day hooked a real chunker. After some nervous moments and two aborted attempts at netting the fish, Alex managed to get the fish back to the bank a third time and could finally celebrate a stunning 17,5 lbs fish. Paul was obviously happy for his nephew but after some serious interrogations over a bottle of Malbec later that night, admitted he felt a slight sting of jealousy towards his young adept, there as his guest and complete rookie, all of a sudden holding the family record. We feel you Paul, we really do. Jokes aside, Paul was over the moon for Alex and the following day he went out and managed to land a 15 lbs fish in a little corner, his biggest for the week. A strong start for this week’s Team USA.

By mid-week everyone in the group had hooked and landed at least one seatrout. First time guest Tony from the UK had a great session on his second-day fishing here at Las Buitreras when he managed to land 2 fish in quick succession, the biggest a solid 14 lbs fish. Stefan from Sweden had a very pleasant “big fish” streak in the middle of the week when he landed a 15, 16,5, and 17 pounder. Not a bad trio of fish to add to his account that also consisted of a good number of fish between 6 and 12 lbs. Stefan, also known as el professor, a nickname he’s earned for analyzing every bit of his fishing in great detail, said it right: “you learn something on every trip you are coming to Las Buitreras and you usually get rewarded for using these new skills”.

Top rod of the week went to our good friend Pontus. After coming here to Las Buitreras several times, he knows what it takes to be successful and this week turned out very well for him. He landed 18 seatrout during his week with Zone 1 being his favourite one as he landed 4 fish each during two sessions over there. As we all know, a four fish session requires a celebratory G&T and Pontus did not disappoint on that part either!

The rest of the Scandis were picking up the fishing technique lightning-fast, catching fish after fish. One of the highlights of this week was probably the sighting of a big Puma in Zone 3. The huge animal had been resting behind a couple of bushes next to the pool called Cojones for those familiar with this place and decided to cross the shallow riverbed towards Norwegian Bank, right in front of Carlos, Mats and Anders. A Puma sighting in the midst of a Patagonian sunset isn’t too shabby if you are a wildlife enthusiast. Mats however wanted more out of his evening session and went on to hook no less than three fish after that sighting. Unfortunately, they all came loose but perhaps it’s understandable that your nerves are a little on edge after that Puma sighting. We definitely saw an increased amount of looking over the left shoulder from both Mats and Anders during the rest of that session. Nevertheless, an evening not short of excitement here on the Rio Gallegos.

The week started off with cooler temperatures around 8-12 C mark but then slowly climbed its way up 17-18 C by the end of the week. The water level was low at the beginning of the week and decreased even more as the days passed. And when the wind decided to take a break we found ourselves doing some serious stealth mode fishing. Nymphs in size 8-12 were the key most of the time but we also found a few fish that were very happy to smash a fast-stripped sunray shadow on the surface, even during the day. As a gift from the weather gods we did get a nice push of water on the last day so hopes are high for the coming week as the river is in great condition, and dare we say it, yes we do, full of fish!