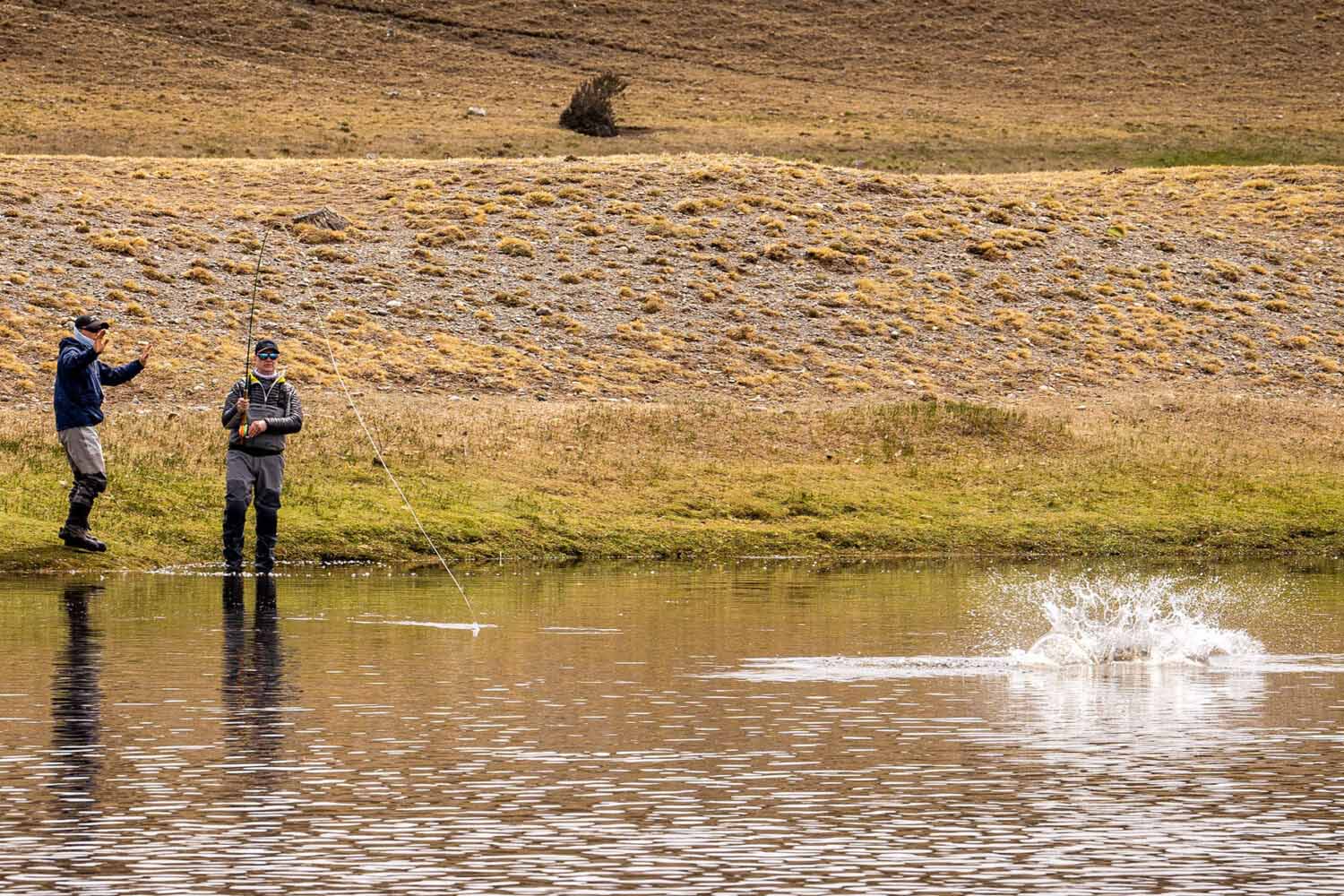 We have liftoff! Season 21 here at Las Buitreras has started and with one week down we already have over 100 fish in the books. Not a bad start to a new year.

Per usual, our first group of the season arrived on a thursday, a couple days before the new year started, to enjoy this extended opening week of the season. On New Years eve, guests, staff, and friends from neighboring estancias came together for some proper New Year celebrations, where we enjoyed tapas and typical Argentinian food accompanied by our new Las Buitreras Selection wines, and “one off” dance performances from some of our guests.

Our first group saw a mix of Buitreras veterans and first time visitors from Sweden, Luxembourg, the USA, Germany, New Zealand, and Norway. It’s safe to say that they all got along very well, enjoying some long nights with vino Tinto, good music, and plenty of laughs around the table and on the water. The week started off with slightly cooler temperatures than usual. During the day we averaged 14-18 degrees Celsius (57-64 Fahrenheit), coupled with rather strong winds for the first few days. The water level was on the lower side when we arrived, similar to last years opening week. But for those of you who followed us back then, you know that this did not affect the fishing much at all last year so we were quite confident from the get go. However, the low water situation didn’t last long as heavy rains in the mountains a couple days earlier helped the river rise to near perfect levels on day two. Come mid week the river had dropped down to just below zero when a new push of water from the mountains left us with a river sitting at 15 cm above zero.

With higher water we resorted to fishing bigger flies such as green/chartreuse, yellow, and black woolly buggers. Steelhead intruders worked great, and of course our beloved sunray shadow in various forms. The recommended general set up for these type of water conditions here at Las Buittreras is a floating scandi shooting head, slow sink tip, and a 20 lbs tippet.

Steinar (El Gordito) and Thor from Norway have been here many times before and came well prepared as always. They both know what it takes to be successful around here and were constantly hooking into fish. Both caught their biggest fish in Barranca Blanca. Thor with a beautiful 15 lbs fish, and Steinar with a superb, american footbal shaped chromer, weighing in at 17 lbs. Las Buitreras regular Jordan, “Jordy”, was, as always, floatiing around the lodge spreading good vibes, making everyone feel good. Pontus, who was hosting a group of clients and friends here at Las Buitreras, teamed up with Jordan for a few sessions and landed some nice fish. A strong believer in the power of the Sunray shadow, Pontus kept racking them up with a stand out fish from Cantera during an evening session. Jordan, a firm believer in quality over quantity, spent as much time watching the river from the sidelines as actually fishing it. Whenever he thought it was time to make an effort he made the most of it, with 6 fish landed in one session.

After a three year, covid enforced hiatus, our good friend Lech from New Zealand was finally back at the lodge. Lech, perhaps one of the most positive and optimistic anglers that ever set his foot on the shoreline of Rio Gallegos, picked up right where he left off last time he was here, catching fish. We will never forget a session with Lech a couple years ago, when he waded out neck deep in Old Bridge and landed 5 fish in less than 30 minutes in the exact same spot. This on a day when there were perhaps one more fish landed that whole day. His quote back then to the other anglers in the lodge when asked how he could catch 5 fish in what seemed to be abysmal conditions: “ I always believe i will catch a fish. Every cast I believe I will catch a fish”. Back to more current episodes: on day one this time around, Lech fishing a big nymph with an orange bead head, landed a beautiful, coloured, 16 lbs cockfish in Lawson pool. The fish took the fly in the fast water above the deeper spot at the bottom of the pool, and offered up some classic Sea Trout headshakes, before taking off down the river. We did get a few colored fish this past week that most likley entered the river already in October/November. Lech’s best session of the week came on day 6, when he landed 4 fish with the two biggest weighing in at 16 and 18 lbs.

Lech’s fishing partner for the week and nowadays regular Las Buitreras guest Alex, didn’t miss a beat the whole week. Ending his week with 20 Sea Trout landed and the biggest hitting the scale at 16 lbs, he earned the “top rod of the week” title. Congrats Alex!

Mats and Tun, both first time guests here at Las Buitreras as well as on their first Sea Trout mission to Argentina. Based on the smiles on their faces during the week, we don’t think it was their last. Tun landed his first Sea Trout on the very first morning in Old Bridge pool, fishing a chartreuse woolly bugger. His biggest fish of the week came the last day of the week when he landed a fresh 17 lbs fish in Puesto that took one of our all time favorite flies, the Yellow Yummie. Mats landed several fish in the 12 lbs range during the week, fishing the pools and runs in a very focused and quiet manner which is one of the keys to success here on the Gallegos river.

Another Swede, Fredrik, on a dream tour across Patagonia, started his great journey with a week here with us. Fredrik brought what might have been the most comprehensive and beautifully tied fly assortment we have ever seen here at the lodge. His highlight of the week was probably a session in Outer Limits in Zone 3, when a 15,5 lbs fish inhaled his black woolly bugger. A new personal best so far. Our good friend Stefan from Sweden, fishing together with Mats for the week, unfortunately had to skip most of the fishing sessions due to illness. The one time he finally managed to get out for a short session he was awarded with two nice fish in Limits and Cohones. Both fish took a swung black streamer. The fishing gods will be with you next time Stefan and we can’t wait to have you back to enjoy a real fishing week here at Las Buitreras.

What a start to the season! The river is in perfect shape and is already holding huge amounts of fish. We want to thank the whole group and staff for this incredible New Years week!

Stay tuned for weekly reports all through mid April.