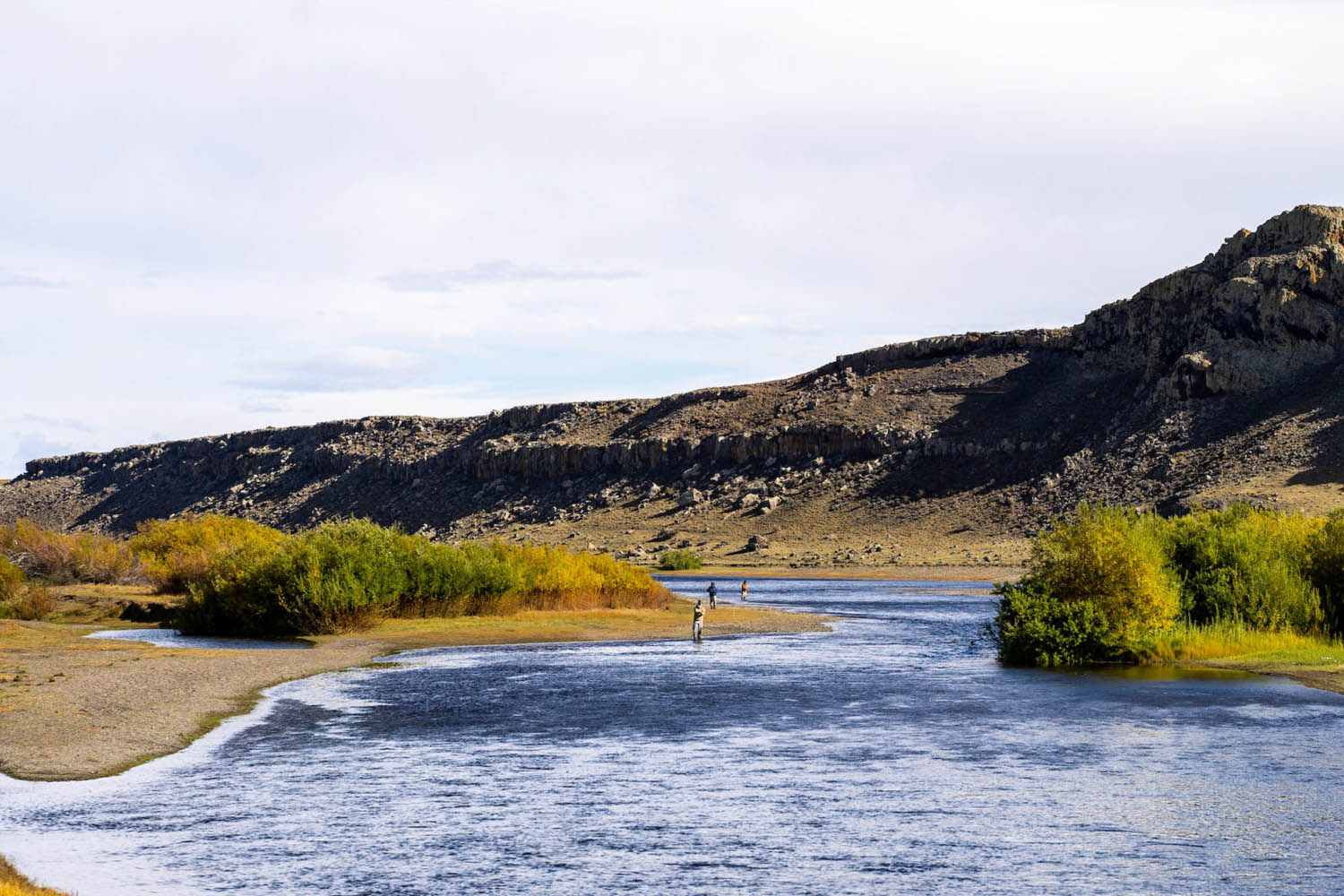 After last week’s incredible fishing where we experienced the best week of the season in terms of numbers, we were all curious to see whether this week at Las Buitreras would continue on the same path or if we were due for a reset.

With autumn now setting in at full swing it is turning Patagonia into a plethora of colors, each and every sunset deserving of being captured as oil painting. This is a very special part of the season indeed and many of us hold this as our favorite time of the year down here. Over the weekend conditions changed quite a bit with dropping temperatures and a dropping river. The color of the river however remained the same, a near perfect tea color and we kept fishing a mix of size 6 – 8 nymphs, girdle bugs, and sunray shadows.

Our guests for the week consisted of four experienced steelhead anglers from Austria that had decided to try the famous sea run browns of Las Buitreras followed by a week at Los Plateados and its unique Atlantic Steelhead run. We also had Gustaf from Sweden, here for the first time and eager to see if all the rumors about this river could be true. Gustaf was accompanied on the river by Marius from Lithuania who had started his visit here with three days of fishing in Zone Zero. To top it off we had Christer and Annacarin Sjoberg back for the second time in 2022 to fish their favorite part of the season.

Overall the fishing slowed down quite a bit this week. We think this was mainly due to the combination of a big drop in water temperature and a dropping water level. When our normal tactics didn’t produce the results we are used to we started experimenting with heavier nymphs and in some pools we even used slow sink tips to try to tease and activate the fish. Luckily these tactics worked out ok and all anglers managed to land fish during the week. Overall, the best time of the day was just before lunch when the water had warmed up a little, as well as the last hour of the day, just before dark.

Barranca Blanca, an all time classic and one of our favorite pools this season, offered a few exciting moments this week as well. After a couple slow hours with not much action the river all of a sudden turned on and Erhard and Thomas hooked into fish almost at the exact same time. Erhard, a great angler and fantastic caster, was covering the pool perfectly and was on his last few strips when a fish attacked the fly right in front of his feet. Many of you will have had this same experience at Barranca Blanca where fish often takes close to the bank of the side we preferably fish from. And as we all know, getting a proper hook set this close to your rod tip is almost impossible and unfortunately the fish came off after just a few seconds. But while Erhard was left with the emptiness and frustration of losing a fish, Thomas had better luck. Or at least he had better luck with the actual hook set. From thereon however things took a turn for the worse. Carlos had been watching both Erhard and Thomas closely and as soon as he noticed Erhards fish come loose he switched his full attention to Thomas. The fish took the fly with full force and turned on a dime, flying down stream. Realizing quickly that this was a big fish, and with the picture of Erhard losing his fish fresh in mind he got worried when he noticed the almost 90 degree bend of Thomas rod and the violent shaking of the rod tip. “Let it run,” Carlos shouted. “I can’t”, Thomas yelled back. “The line is stuck on my finger”! Schmack, the rod came back straight up and the fish was gone. Thomas stood there shaking, still confused and wondering what actually happened. Turned out that when the fish took the fly, it turned around so fast that Thomas’ finger got caught in the running line. He was now left with a broken leader and a big cut in his finger. Unfortunately these things happen sometimes, especially with fish of that size. Tough luck but at least they didn’t return empty handed as this story was repeated several times over the next couple days. For Erhard revenge came quickly as he landed a beautiful 14,5 lbs fish the following day on a Monkey fly.

Father and son, Michael and Andreas, were excited to spend some quality time together on the water in Argentina. The first few days were a bit slow for them with some bites and grabs but nothing that stuck. However there were a few highlights waiting for them towards the end of the week. First it was Michael who hit the jackpot on a sunny morning fishing Golfo de Mathias in Zone 2. The wind was tough and he was forced to cast from his left side but he managed to find a way to get the line out. Towards the end of the pool he was suddenly interrupted mid strip, feeling like he had hooked a rock. Just a second later a massive sea trout went completely airborne. Felix and Carlos were both standing higher up on the cut bank observing and when the fish took to the air they both yelled out “monster”, then instantly tried to suppress their shouting and stay calm to not put pressure on Michael. Whether they managed to keep their cool or not can be argued but the bank turned into complete mayhem with people running left and right looking for cameras, the net, cellphones, while also trying to get a better view of the situation. Luckily Michaels Guide for the session, Milton, stayed calm and instructed Michael throughout the fight. Michael, being an experienced Steelhead angler, used all of his skill and expertise fighting the fish, holding his breath every time the fish took to the air which it did at least 5 times. When it decided to play even dirtier by swimming deep under the weeds the bank went completely silent. Milton however, somehow managed to find the fish sitting at the bottom under the weed bed and netted the fish on his first attempt. When he lifted the net with the fish in it the bank erupted in cheers and jubilations. A beautiful hen fish in great conditions tipping the scale at 20,3 lbs. What a fish.

Although he had plenty of bites throughout the week, it would take until the last session for Andreas to finally get rewarded when he landed a superb 13 lbs fish in pool 75. Well deserved to say the least and a great ending to a memorable week for father and son.

A non fishing related highlight of the week, and for those involved perhaps the highlight of the season, happened early in the week, when Carlos, Felix, and Rick were driving to upper Zone, and just after passing the highest vantage point from where you have great views of the whole Upper 1 stretch of water, they suddenly spotted a Puma in the middle of a kill. The Puma was on his prey right next to the small bridge at the intersection of LA Curva and Chuchis. With the wind in their face the Puma didn’t spot them until they were no more than 50 meters away before it ran into the bushes next to the kill. Not wanting to leave its dinner it stayed in the bushes, waiting for the car to pass so it could finish its meal. After snapping a few photos at no more than 10 meters away from the big cat, the trio moved on towards Wagon Wheel to leave the cat alone. When they returned a couple hours later, most of the kill had been eaten and the Puma was nowhere to be seen. This was the third time we spotted a Puma this season and hopefully it will still be around next year.

Gustaf from Sweden was on his first trip ever to the Gallegos and was fishing together with Marius. They kept experimenting with different approaches and techniques throughout the week, looking for the key to unlock the secret on how to get these fish active this particular week. Gustaf, who was fairly new to spey rods, kept working on his casting in order to improve as much as possible during his week here at Buitreras but did throw in a few sessions with his single hander every now and then. Marius and Gustaf both caught some nice chromers during the week. Gustaf’s biggest fish of the week came in the last session when he landed a nice double digit fish in Little Corner that took a tiny nymph.

Christer and Anna Karin managed to squeeze a few hours of fishing in per day and were able to land a couple really nice ones. But more importantly Christer had some great stories for the evening dinner, keeping the spirits high and the Malbec flowing.

A big thank you to all our guests  who kept their spirits high during this slower week of fishing. You all made this an absolutely fantastic week with nothing but jokes and laughter and we’re looking forward to seeing you all again next season.