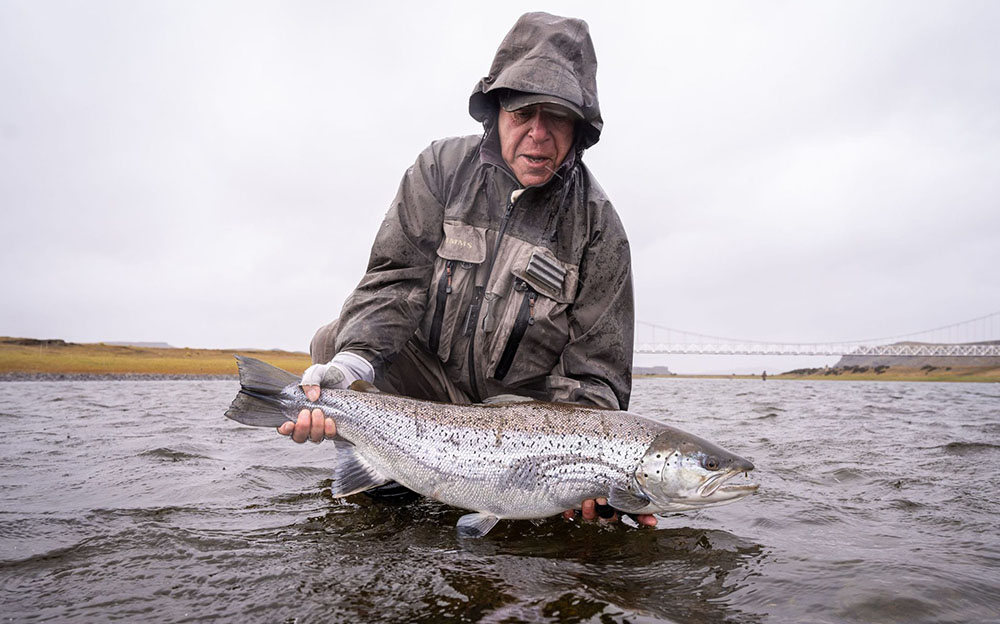 Week 3 and we had the pleasure of welcoming a multinational group of guests from the UK, US, and Norway to Las Buitreras. Half the group consisted of old friends who’ve been here more than 10 times, and half the group were made up of first-time guests. For the veterans, nothing was new in terms of weather and conditions but for the first-timers the extreme changes in weather was a bit of a surprise when they got to experience temperatures ranging from 29 C (84f) midday, dropping all the way down to around 6 C (42f) in the mornings. That’s why we always emphasize bringing several layers of clothes so that you can easily adapt to the quick changes. We did get a small rise of water early in the week but towards the end of the week, we were pretty much back to where we started. Despite these changing conditions, we can already say at this point that this week has been a really good one.

We saw a huge number of fish especially on those sunny days in really clear low water. Without exaggerating we can say with certainty that we saw several schools of 50 to 100 fish moving up the river during the week. A truly spectacular sight that made the whole group fish with great enthusiasm.

The number of fish running up this river each year still amazes us and we feel privileged to be able to offer our clients the most productive water on this river, showing them that there are still places on this planet where we have a healthy anadromous fish population.

With the amount of fish we saw during the week, we were obviously optimistic for some great fishing, even though the river was fairly low with several low and no wind days. Keith and Nick as an example experienced a crazy last day where they landed 6 fish and lost 9. Two of those fish were caught on a single-hander and the biggest of those two was 15 lbs. Nick lost a monster that snapped his line, yes line, when it got snagged around a rock near the bank. We normally don’t have a lot of obstacles in the water here but this fish found one and made use of it.

David and Derek, who have been coming here since we first opened the doors almost 20 years ago, had some great fishing and landed a good number of fish throughout their 9 days of fishing. Starting off with 3 days in our new Zone Zero program where they already got into a few really good seatrout, getting warmed up for their week to follow. Even though they fished perfectly all week, landing some super nice fish, their reason for being here is just as much about enjoying the whole experience from the fishing to the food, the lodge, the surroundings and the feeling of escaping the world for a week. We are so happy that you keep choosing to come back to visit us every season.

Father and son team Sten and Chris, had a great week hooking fish on a constant basis, ending the week with 10 fish landed each. How about that for keeping the family peace. Sten, who was here for the 13th time started the week strong and was way ahead in terms of numbers halfway throughout the week but after one of our guides taught Chris (here for the second time) how to utilize a snake roll cast in certain conditions he started catching up quickly. We can’t wait to see how this unfolds next year. First time visitor Paul, perhaps the most appreciative guest we have ever had the pleasure of hosting here, had a strong start to the week and managed to hook no less than 3 really big seatrout the first two days. Unfortunately all of them came off in different ways, but he was grinning ear to ear due to the fact that he had managed to hook that type of fish on his first time trying spey fishing in this type of environment. He was eager to learn each day, went out during siesta to practice his casting and got rewarded during the week with his first seatrout.

Justin and Craig couldn’t have spent a better week here on the Rio Gallegos. After hooking a bunch of fish on his spey rod Justin decided to work his single-hander when the wind died down. He immediately hooked into a 15 lbs fish in the pool called Flats, a fish he 15 minutes later ended up landing at the bottom of lightweight, appr. 500 meters downstream. Landing this sized fish on single-handers in low clear water is the pinnacle of seatrout fishing in this river. It’s what we all hope to experience one day when the conditions align and we are happy to see several clients achieving it the same week. His fishing partner and first-time spey fisher Craig skipped the whole learning process and went straight to catching fish, landing three fish the first day, biggest weighing 16 lbs. Then on their last evening session, the stars aligned for Justin while fishing Cantera. He first hooked into a fish after 10 min, that fish came off immediately and we changed to a slightly bigger fly and hook, size 8 Copper John, which turned out to be a good decision.

A few casts later he was on-again, a huge swirl in the water, followed by a tank-sized seatrout coming out of the water crashing down on the water sideways. The big gravel bank at Cantera and just a light breeze made this one sound like someone dropped a three-story house into the water. Heart rates went up and Justin was playing the fish perfectly, keeping his cool when the fish went deep into his backing. You just realize that a fish this size is a different game and there is only so much you can do other than keep the tension and praying. We got it close to the bank 2-3 times until finally picking our moment to try and net it. The reward: A whopping 21 lbs fish, the biggest fish of the season so far and also the biggest fish for Justin here at Las Buitreras! What a fish and experience. Big congrats Justin! Just as a side note, Justin and Craig landed another five fish up to 15 lbs the next morning before their departure, serious mojo going on here.

Ed and Laurence, also here for the first time fished like total veterans and hooked fish after fish on both single and double handed rods. These two friends weren’t short of joking around all day long and the fun part was definitely on the high side during their fishing sessions. Laurence in the end also turned out to be top rod of the week with 12 fish landed, on his first trip! What a great team and we already look forward to seeing you two again soon!

David, here for the third time from the USA, landed 6 sea trout in his first two days of fishing Zone Zero, ending his add-on trip, before his actual Las Buitreras week coming up now, with his biggest fish ever so far. An amazing 15,5 lbs chromerr. Not a bad start for getting into your regular fishing week. The go-to flies were nymphs in size 8-10, as well as small salmon doubles like the green or red butt. Exciting times, we can’t wait to see what the next weeks will bring!