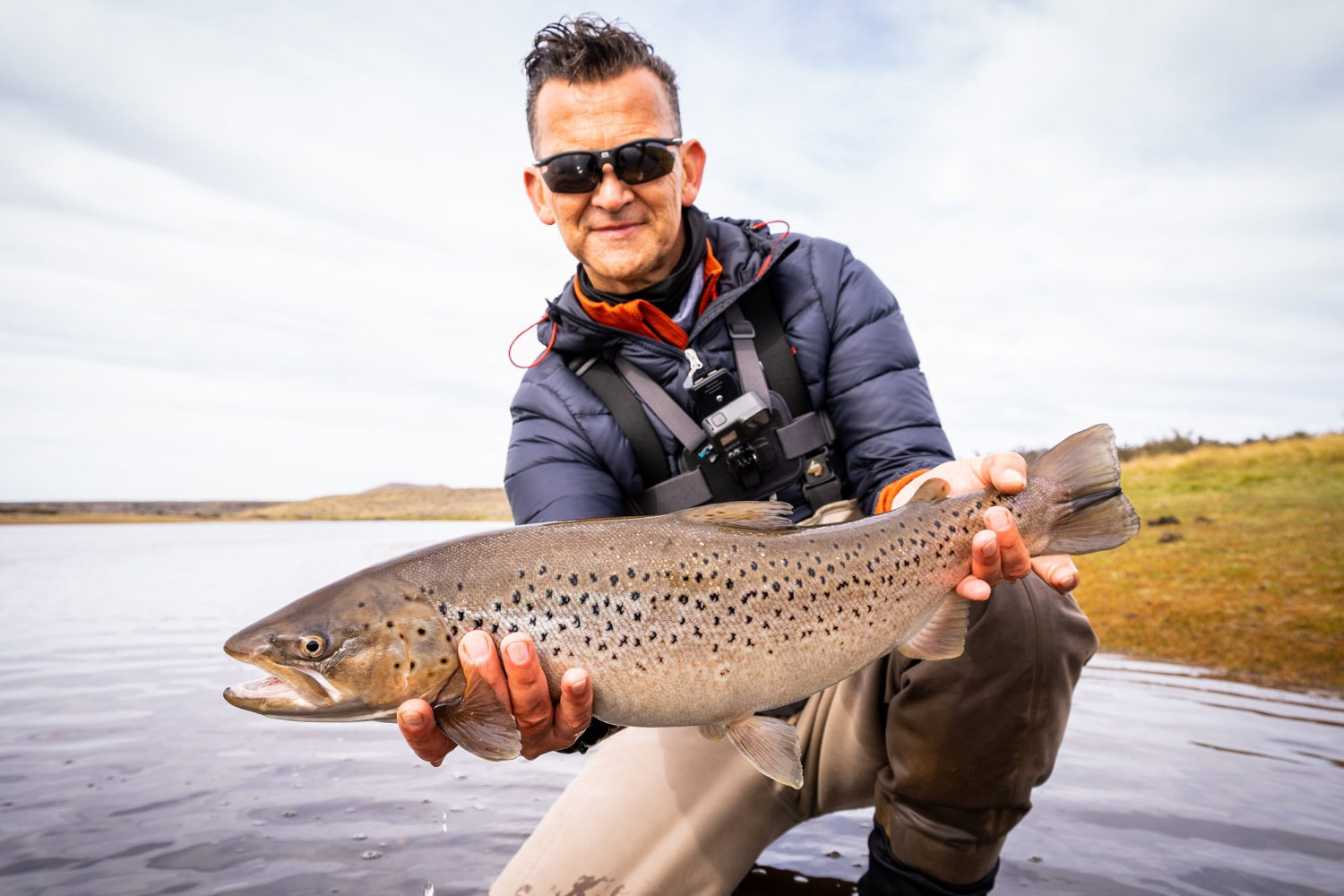 We mentioned in our last week report that March usually brings more water in Las Buitreras. Well, here we go. It was Saturday and we saw a river that came up around 50-60 cm, back to a great water level and a near perfect, dark tea color. We were obviously more than excited to present this news to our group during the briefing on Saturday, anticipating some great fishing the next few days. The group this week was a mix of anglers from Poland, Sweden and Germany.

Fishing started a little slow on day 1, quite common after a big rise, but we still landed a couple of really nice fish up to 17 lbs. From Sunday on we experienced what most of us dream of when going on a trip like this. It all started with an aha-moment when fishing upper zone 1 and seeing several fish following our flies but not really committing or taking the flies properly. We had several “shark moments”, when you see a big bow wave behind your fly, leading to near heart failure every time and expecting a hard bite, but then nothing.

We then decided to try a sunray shadow on one of the rods and this was the start of some of the craziest action we have seen this season. In bright sunshine and windless conditions a fish came up and smashed the fly right away on the first cast! After landing it the action continued with almost every cast and it didn’t take long until all guests had a sunray on their leader. During the next couple days, every strip with a sunray on had you hold your breath. A truly amazing experience. One of our guests that was lucky to experience what he described as “the session of a lifetime” was Maciej from Poland. Maciej, here with his lovely wife Joanna, both enjoyed three days of fishing in Glencross the week before, where Joanna managed to catch her first ever Sea Trout! Congratulations Joanna!

The session that changed everything for Maciej happened in zone 2 one evening. After a slow first hour of fishing he decided to change his nymph for a big Sunray Shadow before walking down to the pool La Recta to make his first cast. As soon as the fly landed a big brown trout smashed the fly, trying to kill it with his body weight before disappearing under the surface. The fly kept swinging and 5 seconds later another fish attacked the fly without properly biting. Another 3 seconds of just swinging the fly and a Sea Trout went all in, grabbing the fly before taking to the air. This time the fish was on and Maciej could land a beautiful double digit fish. The session ended with Maciej landing 5 fish, the biggest 14 lbs, losing three fish, and having at least another dozen strikes and attacks. Cause for a proper celebration in the lodge that evening.

Another great episode that week happened to Sven, now into his third week straight at the lodge with us. Sven and Toni were back fishing the main beats after a week at Zone Zero where they mainly focused on resident Browns. Tony, an avid trout fisher back home in Europe was still walking on air after several sessions in Zone Zero with 10 plus fish and several over 5 lbs.

On this particular evening, Sven was zeroed in, fishing Zone 2 like a machine, cast after cast but no action. Nothing moved, nothing nibbled on his fly. It was approaching the famous last light hour when they arrived at La Recta. With the wind blowing directly in their faces, the guide decided to fish the pool from the opposite side of what we normally do. A big Sunray, tied just before the trip by Svens fishing partner Toni, was on and Sven started stripping line out. His first cast, a short one for a change for Sven who normally hits the other bank and then some, to cover the closer part of the channel. First strip, second str…..Boom!

He was on…and boy was he on. The fish was stripping the line of his reel like it had a hot date waiting in the ocean because this fish was not stopping. After pulling at least 50 meters of backing of the reel it finally decided to go for a big jump before heading back upstreams. Sven couldn’t believe it was still on and was trying to keep the tension on the line and breath at the same time (we’ve been told it’s called multi tasking). The guide confirmed immediately: “ Yes, that’s a big fish my friend! And the good news is, no weed lines or big rocks in the run so take your time”. Several jumps later and with the light fading fast, the fish got closer and somehow the guide managed to land the fish on the first attempt. When the fish was in the net, the hook fell out of the fish’s mouth, as if the fishing gods wanted this one in the net. A stunning 21 lbs hen fish, Svens biggest Sea Trout to date and one to remember for a very long time! Well done buddy, you deserved this one. For Toni there were a few more Sea Trout waiting this week as well and he landed a few really nice double digit fishes. Thank you for leaving us some of your beautiful and more importantly “deadly effective” Sunrays Toni.

Our Swedish duo Leif and Lennart made their acquaintance at Stockholm airport for the first time where they started the journey to Rio Gallegos together. For Lennart this was not the first time here at Buitreras, so he was already aware of what to expect for the upcoming week. Leif on the other hand, was here for the first time and couldn’t have been more excited about the river and way of fishing, which is very different to what Sea Trout fishing means on the Swedish coast. Both Lennart and Leif landed some amazing fish during the week, learning the different tricks very quickly. Lennart most likely remembers his last session in Zone 1 very well when he hooked several fish with his own Magnus shrimp fly and landed a beautiful 11 lbs Sea Trout in Turning bank. Leif started the week with landing a couple smaller ones to get properly warmed up before adding size and weight to his fish consistently during the week. On day 5 he landed a stunning 14 pounder in Cogedero, adding to his week total of 13 fish. Well done Leif.

Last but not least, we had Horst from Germany, who also visited us for the first time. Horst had  been dreaming about Las Buitreras for years but wasn’t sure if he had the necessary skills to do it as he was a beginner with spey casting and double hand rods. He finally decided it was time to try it and boy are we happy he did. During the start of the week he worked hard on his spey casting which paid off when he landed his first ever Sea Trout in Molino run on the second day of fishing. Mid-week while fishing Kitchen pool during a stunning sunset he landed his second fish, a nice 9 lbs fish in very challenging but beautiful conditions. Those of you who have visited us here know what we are talking about.

Then, on Friday, the last day of fishing, something magical happened. Fishing the famous pool Little Corner, being very content with his casting and happy about his development as a caster over the week, Horst third short strip got interrupted by a hard pull and as always is the case, line was flying out in no time. Horst, still not fully understanding what was going on, raised his rod and stumbled backwards with bent knees, trying to offset the violent ripping of line in the water. Luckily the settings of the break had been checked with the latest fly change or we would have been left with a broken leader and a proper bird’s nest in that reel. Approximately 15 minutes later the guide was able to net the second biggest fish of the week: a whopping 20 pounder. Turned out taking a gamble and coming here without any previous experience with a double hander paid off. We’re so happy for your Horst! You earned that fish.

The stories that are written here at Las Buitreras are always unique and full of surprises. Never give up, stay positive, and you will be rewarded. What a week. Now we can’t wait to see how the next couple of days with this water will play out!