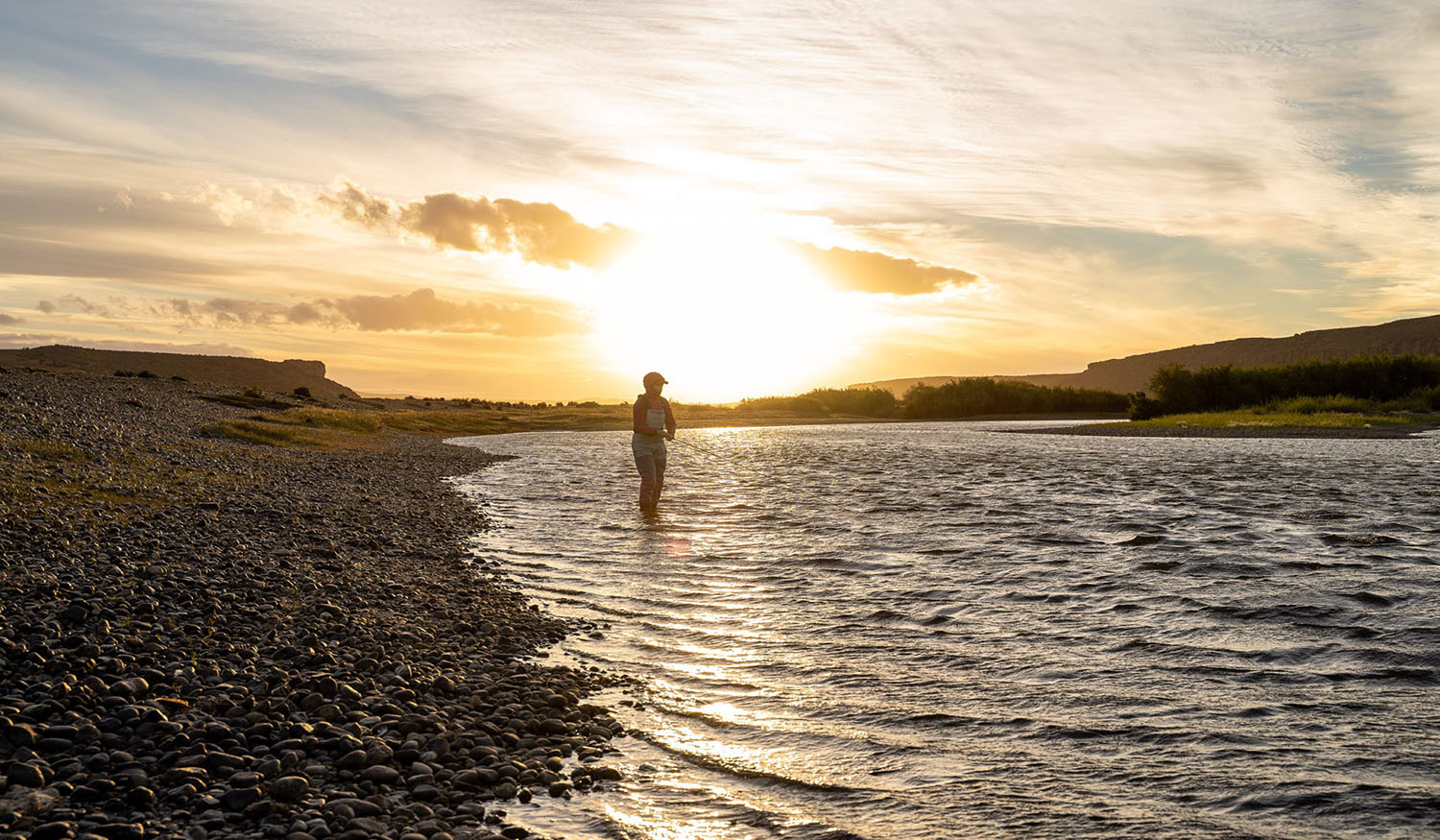 It feels like the weeks are flying by and here we are at Las Buitreras, week 7, and already at the midpoint of the season.  This week was hosted by Mr Solid himself, Christer Sjöberg and his wife Annacarin who were accompanied by a group of dear friends from all over the world such as Sweden, Iceland, France, the USA, UK and Germany. This week has always been an entertaining one with spectacular stories around the dinner table and we are happy to report that 2022 did not disappoint. Apart from the storytelling, we had a very productive fishing week with every guest catching as well as losing their fair share of fish.

The water level had dropped back a bit for the start of this week but was still good enough for most pools to work fine. By the end of the week, however, we saw a nice rise again which has been an occurring theme throughout the season so far. We also had good wind for most of our sessions which created some good conditions to cover water. Along with the wind came some stable weather with temperatures around 14-18 C (57-64 F) and mostly cloud-covered skies which we of course always like to see here at Las Buitreras as it gives us and the fish a better cover. Our last hour of fishing was also this week a very productive one, bringing us a good bunch of fish to the net on a regular basis. This was also the case for the two biggest seatrouts of this week. First, it was Jean Luc who hooked up to a crazy hen fish that immediately after being hooked ran in lightning speed upriver, over weed lines when it suddenly swam zig-zag through the whole river with a great run downstream at the end. The same place during magic hour got our good friend Chris T, an amazing cock fish that hammered his Sunray Shadow during full moon session. Both fish hit the scale at 18 lbs and were landed in the lower part of the Island Stream. Chris and his fishing partner John were both showing that they learned a lot of small details over the years and were landing big fish during the week. John was successful in our honey hole, 75, with a great 15 lbs seatrout as well as in Heavy Weight landing a beautiful 16 lbs seatrout.

Alex S, being at Las Buitreras for the first time and also on his first real proper fishing trip for an anadromous species, had an amazing week. It started off with the first day being the windiest of the season so far. Some people might think there is no way to hook a fish or even cast a line in 130 km/h of wind. Well, Alex managed to land three fish in these conditions, being a Spey casting beginner! Nothing is impossible. We switched to Green Lanterns and Yellow Yummy streamers on that day as the wind obviously brought up a lot of sediments from the river bottom. It was good to finally be able to fish bigger flies again. Furthermore, he was able to land two 14 lbs seatrouts during his week, a great achievement and probably something he will remember forever as he also finished the week as top rod, sharing it with Chris who both landed 12 seatrouts during their week. Alex’s fishing partner for the week, Kevin from the US, visited Las Buitreras for the second time. He finished the week very strong by landing two fish on the last day, the second a mean 14 lb henfish landed in Lawson pool, one of the trickier pools to fish. Both caught on his new favourite fly, an olive flashback nymph in size 10.

Hans and Claes, close friends from Sweden, kept the group entertained with a constant friendly banter between them. Claes, known for his dinner time stories kept the tradition alive and even managed to inspire other members of the group to share some great stories. Claes visited us as early as 2003 for the first time and knows the river like the back of his hand. Fishing wise his highlight came when he landed a gorgeous 15 pounder in Little Corner.

Our second Swedish Team, Frank and Pontus, were enjoying their time away from a cold Scandinavia to the fullest, switching between catching fish and drinking Quilmes on the riverbank. One of many highlights for them was when both landed a double-digit fish from 75 during the same session.

Annakarin was on fire as always and started catching fish as soon as she hit the water. Christer and Jean Luc couldn’t stop laughing when discussing how she was constantly catching fish both behind and in front of them. Even though she only fished for 2 days in Las Buitreras before going up to our new program Glencross, she managed to land several fish and lost a couple of really nice ones right by the net. One of her highlights was landing a fresh 15 lbs chromer at Cogedero.

Team Iceland, Tryggvi/Heizi/Sigpor, travelled from one dream destination to another in order to see how we do it down in Argentina. A great small group of friends that are just as fishy as one would expect from guys that spend most of their time on the water chasing trout and other sea-run species. After getting used to the wind, which usually takes a day or two when you have never fished in Southern Patagonia, they all did very well and landed some really nice seatrout both on single and double-handed rods. Tryggvi really found his groove in Zone 1 and ended up landing a 13, 14, 15 and 17 lbs fish up there. Heizi, inspired by Claes constant storytelling decided to share a real jaw-dropper of his own one night around the dinner table, causing a few guys to swallow their locally brewed draft beer or Malbec in the wrong pipe. There certainly was no shortage of entertainment this week! Thank you guys.

Last but not least, we had two other newcomers in our week. Peter from the UK and Michael from Germany, who both came mid-week to start their trip with three days in Zone Zero to get into the rhythm before doing their full week at the classic Las Buitreras beats. They both experienced some exceptional fishing in Zone Zero and Michael caught his first-ever seatrout on a single-handed rod, and what a fish it was. A fresh 13 lbs fish that took him way into his backing several times over. For people who never experienced this type of fishing, it is pretty exciting to see your backing for the first time in your life. Peter, an experienced salmon and trout angler, was fishing like a machine from day one landing 4 seatrout up to 12 lbs, one of them on a dry fly! Apart from that, they both caught numerous big brownies. A great start for them. Their story will continue next week.

Our fly fishing specialist Peter Collingsworth has been over to Las Buitreras, fishing the banks of the famous Rio Gallegos many times, so if there’s anything you would like to know about the fishing or if you have any questions you’d like to ask him, you can contact him on 01603 407 596 or email at peter@sportquestholidays.com he would be delighted to speak to you.