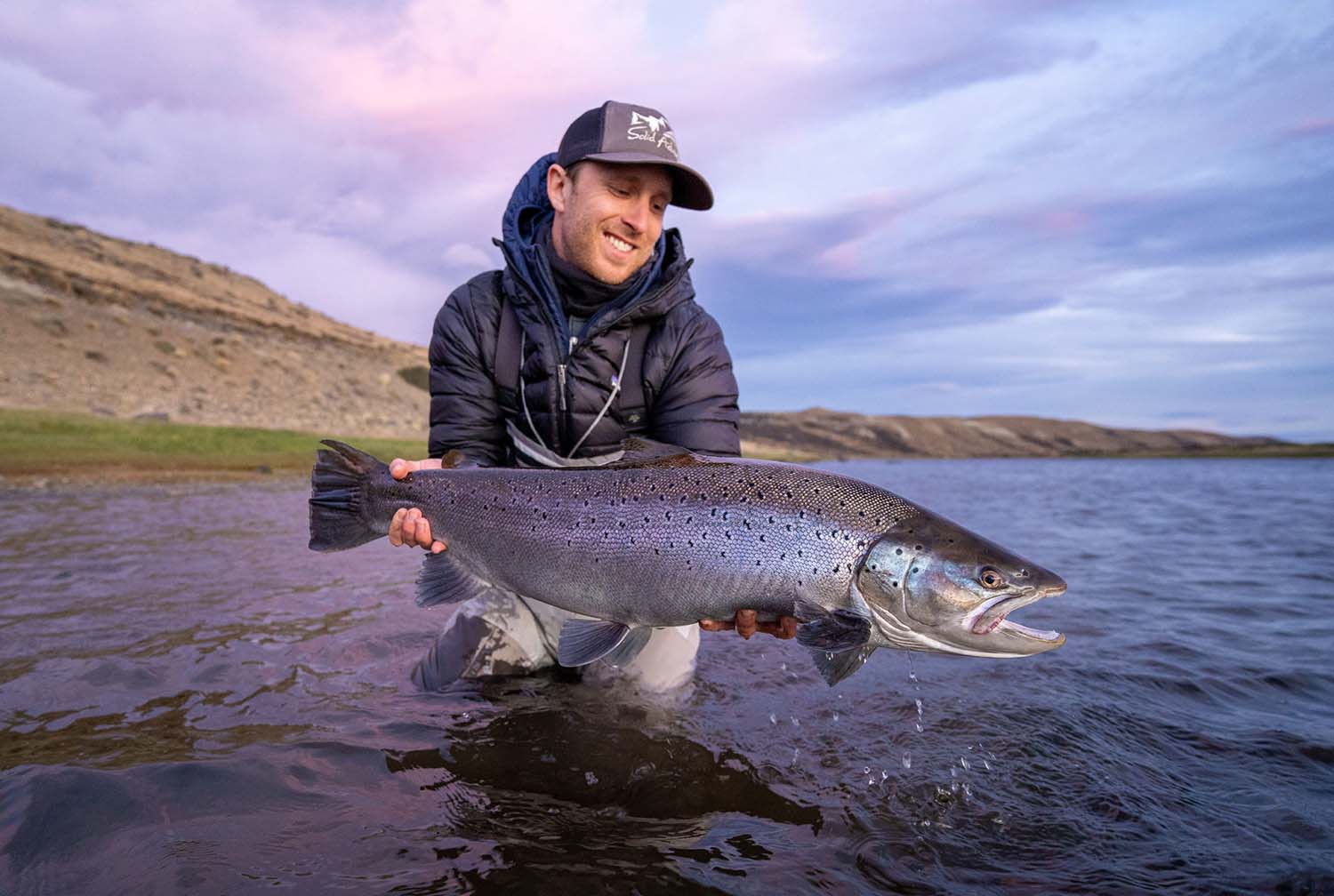 Another week in the books at Las Buitreras as we head into the last days of January. Despite the low water level we still see big numbers of fish in the river. With the river being relatively shallow one would expect almost all fish to take shelter in the many holding pools along the Las Buitreras beats. And while those pools do hold plenty of fish, we still catch really good numbers in the shallow, faster runs and spots that one would speculate would only work with higher water levels.

The group this week was a team from the USA, brought over by our good friend John Bilotta. Apart from John, David and Tom, who’ve all been here before, the group consisted of first time visitors. What made the week even more interesting and exciting was that several of the guests had very little experience fishing with spey rods, some none whatsoever, which always makes it a fun challenge. What better place to try out Spey fishing for the first time than in southern Patagonia! At least as long as the wind is in your back. Looking back now we have to say that all of them did exceptionally well and by the end of the week everyone was able to cover the water well. Best of all, everyone was able to both land and lose several sea trout and resident browns during the week.

We started the week with pretty strong winds, which can be a bit overwhelming when you are new to spey fishing or just aren’t used to these types of weather. For David, John and Tom however, who’ve all been here before, we don’t even think they noticed the wind. As everyone who’s ever fished in these waters knows, the wind is your friend, and after a session or two everyone got used to it and started using the wind to their advantage. As one should and need when fishing down here. As the week passed the wind calmed down quite a bit and we got to experience real summer days too with high temperatures and almost no wind at all. The “no wind” days are usually quite humbling when you realize that casting without the help from the wind can be somewhat challenging and that your leader doesn’t really straighten out the way it did with some wind in the back.

With the water remaining low we stuck to the same tactics as previous weeks, mostly fishing small nymphs like the copper john size 10 or 8 during the day, and switched to leeches and sunray shadows during last light. As far as fishing experiences goes, it’s hard to beat a violent seatrout take in the surface.

We had many reasons to celebrate during the week, keeping the Malbec flowing until the early hours each night accompanied by some great stories from the river. Susan, for example, had an exceptional experience on day 3 when she landed her first ever seatrout in Little Corner, only to follow it up by landing three more fish that same evening. A four fish day here on your first visit is nothing less than spectacular and very impressive. An exceptional day for her and a reward for being so positive and staying focused at all times while fishing. Susan and her fishing partner for the week, Tom, formed a great team and improved both casting and fishing throughout the week. For that they were rewarded with hooking some really nice fish. Some that they landed, and some that got away.

Another great example of positiveness and optimism being rewarded was George, choosing to visit Las Buitreras for his first fishing trip ever. Yes, ever!  Take away 3 or 4 sessions with a spinning rod spread out over a period of 50 years and you have what we would classify as a beginner. He explained to us that after telling his father he had booked a trip to Argentina to go fishing, his fathers only reply was: “Well, I’m not worried about the fish”! Maybe he should have been, as George, after figuring out how to use his brand new rod, reel, line combo, managed to land not only his first seatrout ever, but was also inches away from landing an absolute pig that he hooked in pool 75. After fighting the fish perfectly for almost 10 minutes and having the fish on the bank, the fish used up his last energy reserves and bolted out again, snapping the leader and never looking back. George however didn’t seem to be bothered at all and came back to the lodge all smiles and laughs, just as he did every day, explaining that his poor guide was crying in the car after George had lost 3 fish that afternoon in less than an hour.

David, calmness personified, had a good story to tell after fishing Zone 1 in the evening. He was fishing Turning bank which is one of our faster runs, when on the last cast he hooked into an absolute beast of a seatrout. This fish, as so many of the big guys do, moved into the deep pool below the run and decided to just sit in the current for what seemed like ages. When David finally managed to move him and after what felt like an eternity got him close to the weedbank at the bottom of the pool, our guide got a first close look at the fish and momentarily frose. This was a solid 10 kg plus fish sitting a little too deep and far away for the net. After sitting there for a few seconds David managed to get him closer and just when it was about to be netted it did one of those dreadful headshakes and the fly came loose. While our guide was sitting down on his knees, net in hands shaking his head David just laughed it off, stating: you can’t catch them all!

Lovely couple both in life as well as on the river, Mary and Burr, representing the trout unlimited fishing club, were also enjoying their first stay at Las Buitreras. Burr, keen to get going from the moment he arrived, didn’t waste any time on his first day, immediately landing an amazing 16 lbs chrome cock fish. No warm up needed apparently. This fish ended up being the second biggest fish of the week, only a couple lbs shy of the number one spot. But Burr had no reason to be sad about missing the number 1 spot, not that he cared anyway, because after a late night discussion with George we decided to add some Swedish flavor to this all US week and handed out participation trophies to everyone involved. “Everyone’s a winner”, something that is actually true when fishing. And with that, we transition back to top rod of the week, which was shared between John B and Mark R, both with 8 seatrout landed. Mark R was another first timer at Las Buitreras that came here with the intent of learning how to spey cast. Even though he stayed dedicated to the spey casting most of the week, and with great success at that, he did make the most out of the calmer days and used his great single hand casting skills to land some really nice fish in the double digit range. An impressive feat during those no wind sessions in this clear and low water.

A big thank you to John for bringing such an amazing group of people. We can’t wait until we see you next year.