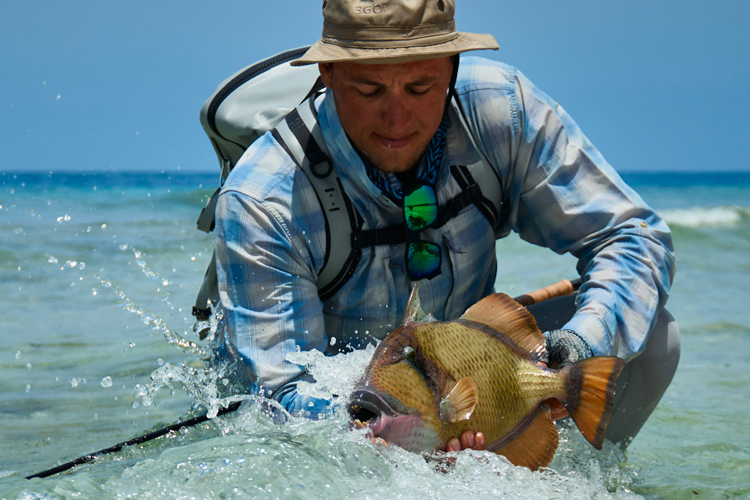 Its week 8 on the Nubian flats! This week welcomed back some familiar faces who visited earlier on in the year. This week turned out to be a blinder of a week with some fantastic fish being landed, and a-lot of new species for the group!

Week 8 saw the guys welcoming back X-Factor angling for the second time this season. Their first trip with us was in the North on the coastal flats chasing trophy Triggerfish. Despite the extreme weather they were able to land some truly magnificent fish, however, it was time for them to experience the South with a large variety of different species that often frequent the flats.

The guys saw it all during week 8! The Triggers played their part on the flats this week as everyone enjoyed sight fishing to these incredible fish on a variety of different flats, from the turtle grass to the broken coral, from the Yellow-margins to the Titans. Along with getting their fill of Triggerfish, a bunch of really good GT’s were landed, sight fished, teased and from the pangas, it was immense to say the least. Amongst the joy, there were moments of madness and heartbreak with a couple truly special GT’s, however, that’s the nature of the beast, as everyone acknowledged. The guys reflected on how special those moments were despite not bringing them to hand at the end of the day.

Towards the end of the season we saw a massive influx of Indo-Pacific Permit moving and feeding on the flats, especially over the turtle grass. Last week gave us a bunch of incredible shots at those fish, however, not being able to convert any. Nonetheless, it was incredible to see those fish on the flats and being able to present flies to them! Further highlights were having shots at massive Bump-head Parrotfish on the flats of which one was hooked but managed to part the leader shortly after the hook up. The week had it all, not to mention landing a Milkfish on an Afrijig over a relaxed lunch on the panga which was a sight to behold, courtesy of Luke.

It wasn’t only the flats that were on fire, fishing on the pangas over the drop-off, throwing brush flies on floating lines, proved to be an immense way of targeting fish. A wide variety of species were landed from the pangas including GT’s, Bluefin Trevally, Silky Sharks, Barracuda and Bohar Snapper. It was an awesome way to spend an afternoon after the light on the flats had faded, making for poor visibility in the flats.

From the guides, it was amazing to have the guys from South Africa back on the Don Questo for the final week of the season. The team couldn’t have enjoyed their time more on the Nubian Flats throughout the ten-day trip. Memories were certainly made that will never be forgotten. Cheers to X-Factor Angling and all that were involved, what a week we had.

Tim, Brent, David, and the rest of the crew.