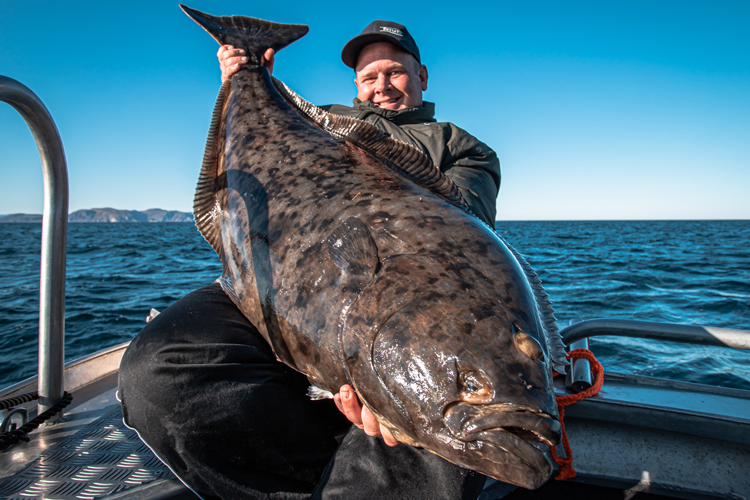 This week our camp in Havøysund welcomed a group of Dutch anglers fishing the annual Penn Festival; once again, the weather was a little changeable, but the fishing was still first class.

After a brilliant week of excellent weather and sunshine, our Dutch guests have just left the camp with huge smiles on their faces. The week offered an abundance of nice fish, radiant sun and clear blue skies, with only a few days of stormy winds from the south.

The main focus for the week was the Halibut, and at the start of the week, conditions were tricky, the fish didn’t want to play ball, and the winds from the south made choosing spots difficult.

On the second fishing day boat 14 managed a nice fish of 150cm just outside the camp, but it wasn’t until Saturday when we could venture out a little further, with all the boats managing some good Halibut to around 110cm. Boat 8, fishing in small bay, landed the biggest of the day, one which measured in at 158cm.

I took a group of boats out a little further to an area searching for big fish, but after just a couple of hours fishing, the wind increased and forced us to change our plans. Despite the rough weather, we saw an incredible amount of Sandeels on the sonar and soon, after switching to a Sandeel bait, Rick was hooked into a nice fish – one which measured in at 133cm.

The following day the wind dropped, and the fish turned on; boats 11 and 12 had a fantastic day fishing for Cod, whilst also landing two Halibut of 160cm and 177cm.

We caught lots of small to medium-sized Halibut in my boat, spin fishing, and fishing with dead baits. When the tide dropped, I also landed a lovely big Plaice, a fish I estimated to be around 3kg. As soon as the tide and currents increased, the Halibut returned, and we finished the day with a better fish of 144cm, measured and released.

During the last fishing day, the wind increased and once again, it became a little harder to fish effectively; however, we still managed some Halibut, with Anthonie landing one of 150cm.

Tuesday, which was actually meant to be the last fishing day, was spent on dry land as the wind was simply too strong and the sea too rough to venture out. However, despite this somewhat disappointing end to a good week, all the anglers left the camp very happy.

We are now preparing for the next set of guests to arrive, and unfortunately, the start of the week looks messy weather-wise, but hopefully, it will improve so we can get out and back amongst the fish.