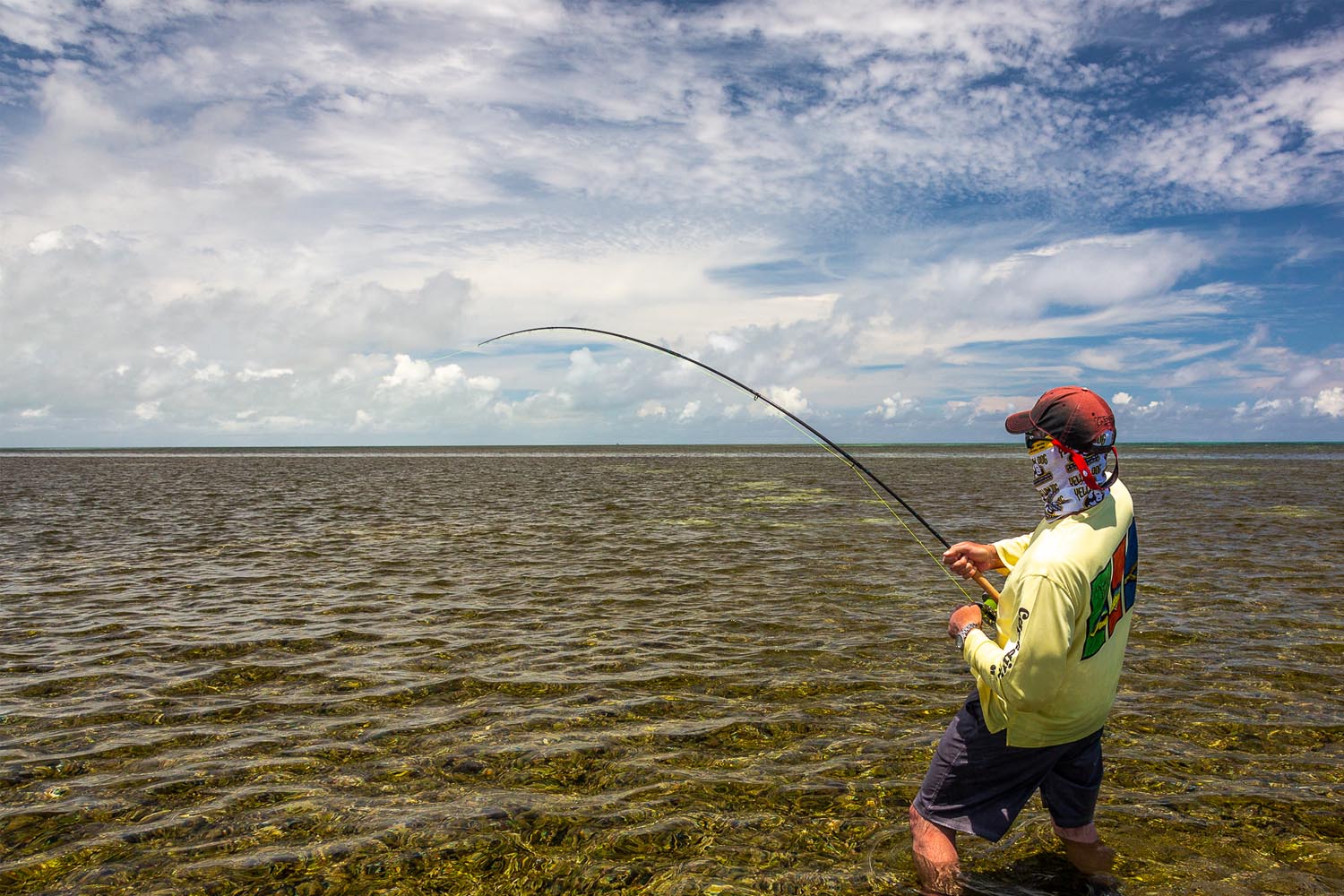 Welcome to the third week of the Providence March – April 2022 fly fishing season. This week saw us welcome a mixed group of anglers from the UK and the US. Some of the guys were regulars to the Providence experience while others first-time visitors to the wonders of this unique Seychelles atoll. The previous 2 weeks of fishing action had our expectations set sky high, as we completed the final bits of preparation before the first day of week 3 on Prov’s exciting flats.

The first day dawned with a slight breeze and bluebird skies resulting in perfect sight fishing conditions. It turned out to be a day of firsts for our guests who got into swing of things from the moment their feet hit the flats, with Mark, Margaret, Vaughn, Duncan and Will all landing their first GTs on the fly. By the time all our tender boats had returned to the mothership on the first evening, we had amassed a total of 19 GTs for the day…a great start!

The second day saw a total of 12 GTs landed, with a special mention for Will who experienced the thrill of shallow water GT fishing when he connected to a large fish that had been seen tailing on the edge of a lagoon. His beauty stretched the measuring tape to 100cm on the dot… well done Will! Gerry experienced something similar when he managed to entice a massive fish from a school to eat his fly, and following an intense battle the landed fish measured an impressive 109cm… well done Gerry! The tailing fish species were also encountered in good numbers resulting in Kris and Chris each landing their first Triggerfish on the fly. Well done gentlemen!

The third day delivered a truly diverse experience for our guests, with loads exciting opportunities in front of the different iconic flats species available on Providence. By day end our group had landed a total of 17 GTs, 5 Bonefish and a Triggerfish. The Triggerfish landed was a special one as it completed a flats slam of a GT, Bonefish, and Triggerfish for Alexander… excellent job Alexander!

The fourth day saw a total of 16 GTs and another 3 Triggerfish landed. The only Bonefish of the day was landed by Duncan, when he completed his first and the group’s second flats slam of the week… well done Duncan!

The fifth day produced more exciting variety on the flats and in the bluewater, with 7 GTs, 6 Triggerfish, and 3 Milkfish landed. The highlights of the day included Mark and Margaret’s first ever Triggerfish catches. A special mention goes out to Margaret who went on to complete her first flats slam consisting of a GT, Bonefish, and Triggerfish… fantastic Margaret! The conditions proved perfect for fishing for the atoll’s resident Milkfish population, which resulted in Will, Vaughn, and Chris all landing their first Milks on the fly, Great job guys! Chris’s Milkfish success late in the day completed yet another slam… superbly done Chris!

The sixth and final day of the fishing week saw our guests enjoy bluebird skies and very little wind. The conditions, perfect for sight fishing,  delivered a total of 19 GTs landed. Margaret enjoyed the standout catch with an incredibly powerful 103cm GT, picked from a school that was found staging up on the edge of the atoll, nicely done Margaret! The Bumphead Parrotfish were encountered in good numbers resulting in both Mark and Vaughn completing there first ever Bumphead catches… Well done gents! The Milkfish were again found feeding heavily on the outer rim of the atoll, Alex and Duncan going on to land one each… their first ever on the fly. Excellent job guys.

Total tally of other species caught – 483