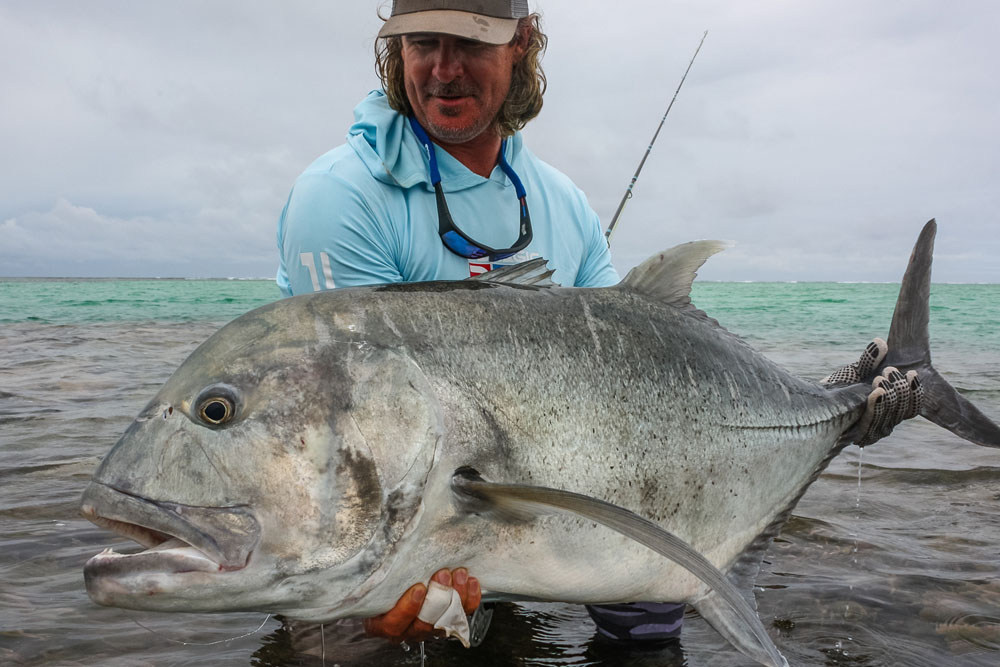 As the season ends in Providence Atoll our guides at the Lodge are now writing up their catch reports, the second of which is now in.

Welcome to the second week of the 2021/2022 Providence season. This week we welcomed a group of 12 anglers aboard the MV Maya’s Dugong. After a quick orientation of our mothership, we set about getting everyone’s tackle up to GT-proof standard before we hit the high seas on our way to the wild waters of Providence Atoll.

Day 1 – The first morning of the fishing week dawned with bright sunshine and a southeasterly breeze. A mid-morning low tide and loads of water movement experienced throughout the day provided favourable fly fishing conditions for Giant Trevally. A total of 7 GTs were brought to hand with angler Christiaan landing the standout fish for the day. His 119cm GT was sighted as it crossed a small white patch on the edge of extensive turtle grass rolling bank. He made a quick short cast and began retrieving the fly with a long medium stripping action when a monstrous mouth exploded out of the water engulfing his fly just 10ft from the tip of the fly rod. An intense fight ensued and after reeling in tons of backing finally got his trophy to hand. A special way to get his 2 weeks on Providence underway, well done Chris!

Day 2 – Conditions proved tricky with black clouds and continuous rolling sheets of rain. The inclement weather made the fishing tricky with a total of 6 GTs landed for the day. Fortunately, the large tails of the Bumphead Parrotfish are a welcome and easy-to-spot target, even when conditions prove difficult. Anglers Steve and John both went on to hook and land their first Bumpies on the fly, well done guys!

Day 3 – Sunshine! A fast-dropping tide in the morning provided ideal feeding conditions for the atoll’s resident Milkfish population. Angler Jeff got straight into the action and after making the perfect presentation came tight on his first-ever Milkfish on the fly. A titanic fight of an hour followed and finally to Jeff’s relief his Milkfish was firmly secured in the net. Well done, Jeff! The improvement from the weather gods showed in the catch tally with our group landing a total of 13 GTs for the day. Ed took the limelight in this regard landing a massive GT of 122cm. His fish was spotted while perched on a coral outcrop, overlooking some deeper channels. Following a long cast, the fish wasted little time closing the distance to the fly and hoovered the fly down without hesitation. A mammoth fight ensued and though there was a fair bit of coral in the area Ed managed to keep the fish clear of any unwelcome snags and eventually landed his dream catch. Well done, Ed, certainly a fish of a lifetime!

Day 4 – A continuation of the good weather and tides that allowed us access to the far-flung corners of the atoll delivered some unbelievable fly fishing action on the Giant Trevally front with 32 landed for the day. The high water experienced in the afternoon allowed for time spent searching for the pelagic species of the deep blue. After successfully teasing up a pack of Sailfish, Tim, and Greg both went tight and had to perform the comical Sailfish dance! Unfortunately, Tim’s fish came unbuttoned in the dying moments of the fight and right next to the boat. Greg however, managed to stay connected land his first Sailfish on the fly, well done Greg!

Day 5 – Providence delivered another day of red-hot GT action with our group managing to land a whopping 42 GTs between them. The 3 ball of Ed, Gary, and John were in the thick of the action on one particular turtle grass flat and landed a total of 31 of the 42 GTs, a day of GT fishing we’re sure these anglers will remember for years to come! Well done, gents!

Day 6 – The final day of the week saw overcast skies and a stiff south-easterly wind blowing. A total of 22 GTs were landed for the day. Angler Ed enjoyed yet another outstanding day on the flats landing 2 beautiful fish that stretched the measuring tape well past that magical meter mark. Well done, Ed!

That brings us to the close of the second week of fly fishing action on Providence, this week’s fishing delivered several moments that our guests and guides will remember for a long time. The distinct influx of GTs encountered on flats has us all excited for the fishing potential of the next fishing week.

Our catch tally for Week 2 was as follows: