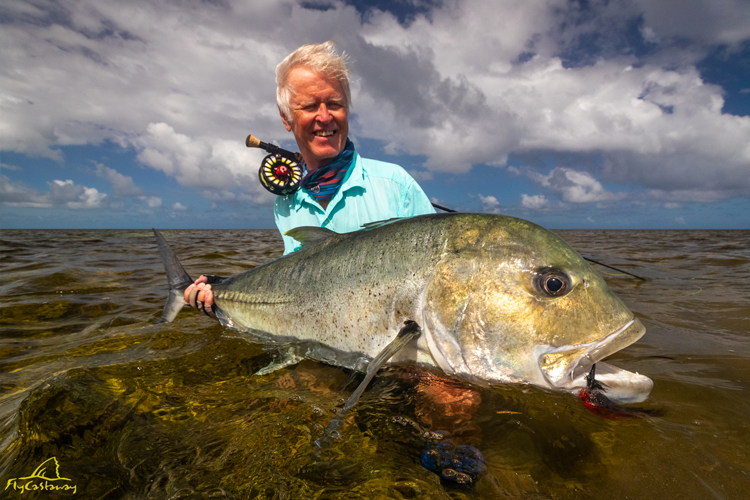 As we enter another week on providence, its great to see that all the customers are landing some amazing fish on the fly, from huge GT’s to some lovely Bonefish! You can find the full report from the guides below.

Week 2 of the Providence Atoll April 2021 fly fishing season saw us welcome a group of 9 anglers, most of whom were Providence regulars. Brimming with the excitement of being some of the first few to visit the atoll in a little over a year, we set to work preparing their gear for the flats fishing action the following 6 days had in store for us.

The first morning dawned calm and still. A midday spring tide low provided us the rare opportunity of exploring the eastern side of the atoll. Our plan paid dividends as the group enjoyed a great day on the flats with everyone opening their Giant Trevally account for the week and a total of 23 GTs landed on day 1. Rod managed to land our first meter plus fish of the week, a beautiful GT that measured 102cm. A special mention must also go to Stephane who experienced a cracking first day out, landing 14 GTs during the day. As always, the various grouper and snapper species added to the diverse flats fishing experience with most of the group enjoying the raw power of these beautifully coloured powerhouses.

The second morning dawned with a slightly stiffer south-easterly breeze and with another midday low tide. The boats set off for the day with the focus on working the outer rim of the atoll. A total of 13 GTs were landed for the day, Valter landing his biggest GT on the fly of 103cm. Well done, Valter! Tony danced with one of the atoll’s fabled jumbo-sized GTs, unfortunately an inconveniently placed coral head meant that the fight was over in mere seconds, fly line, and all lost in the chaos that followed the hook set.

The third morning saw darkened skies, rain, and a stiff south-easterly. The reduced visibility meant we had to focus on areas that would provide visuals in the way of bow waking or tailing GTs on the flats. A total of 11 GTs came to hand with Tony landing a brute of 106cm. Tony’s trophy was spotted as it tailed hard on the flat thus marking its position. Following a well-placed cast, a massive bow wake whizzed through the shallow water to take his fly. Well done Tony! The late afternoon Milkfish action continued and this time it was Mark’s turn to go 12 rounds with the incredibly powerful Milkfish. After acrobatic leaps, fast runs, and some fancy footwork around the skiff, Mark successfully landed his first-ever Milk on the fly, well done Mark!

The fourth day continued with darkened skies and persistent rolling squalls which made spotting fish over dark turtle grass challenging. The limited visibility on the flats resulted in just 4 GTs landed for the day. Stephane did however manage to land the first Triggerfish for the week after shooting a precise cast to an energetic Yellow Margin. Upon seeing the fly, the fish wiggled and danced on it, eventually pinning it to the bottom resulting in a successful hookup.

The fifth day saw a move of the mothership to allow for easier access to the flats better suited for the neap tides and the tailing species that prefer a reduced amount of current over the flats. A total of 5 GTs were also landed for the day. Steve landed his biggest GT on the fly while drifting the edge of a lagoon. The shot required a short, fast presentation which Steve nailed. Two strips and the fish blasted forward and engulfed his fly. Following a tug of war that only GTs can offer, Steve’s fish finally came to hand and measured 105cm. Well done, Steve! The tailing fish species were about in good numbers and provided good fishing during the late afternoon incoming tide. A total of 13 Bones were landed, the average size in the 6-7lb range. Tony and Stephane both landed Triggerfish late in the day bringing an end to day 5 on the flats.

The final day of the fishing week saw a return to relative normality on the weather front with clear skies and a strong south-easterly. We experienced an afternoon neap tide low which resulted in a consistent covering of water on the flats. A total of 10 GTs were landed on the final day. Michael managed to tame the biggest of the week that measured 109cm. His fish was hooked after 3 black shapes were spotted moving with purpose over a turtle grass flat. Michael placed the fly ahead of the lead fish, causing all three fish to charge the fly, fortunately, the largest of the pack getting to the fly first. A wonderful way to close out the week on the GT front. Well done, Mike!

The neap tides provided another day of productive fishing for the tailing species with a total of 25 Bonefish landed for the day. Steve enjoyed a particularly golden streak landing 11 Bonefish himself with an average of 7 pounds. 2 wily Triggerfish were brought to hand with one completing a slam for Peter, well done Peter!  Michael riding high after his big GT in the morning went onto land his first Bumphead Parrotfish and a few Bonefish completing a flats slam in the process. Talk about closing out the week in style, well done Mike!

A busy week on the flats of Providence provided us all with moments of flats fishing magic. Although the weather made conditions tricky at times, we enjoyed several special catches and busy sessions with our guests. As always, it was a pleasure to share the wild adventure that is Providence with all who joined us for week 2 of the season.

Our catch tally for week 2 was: