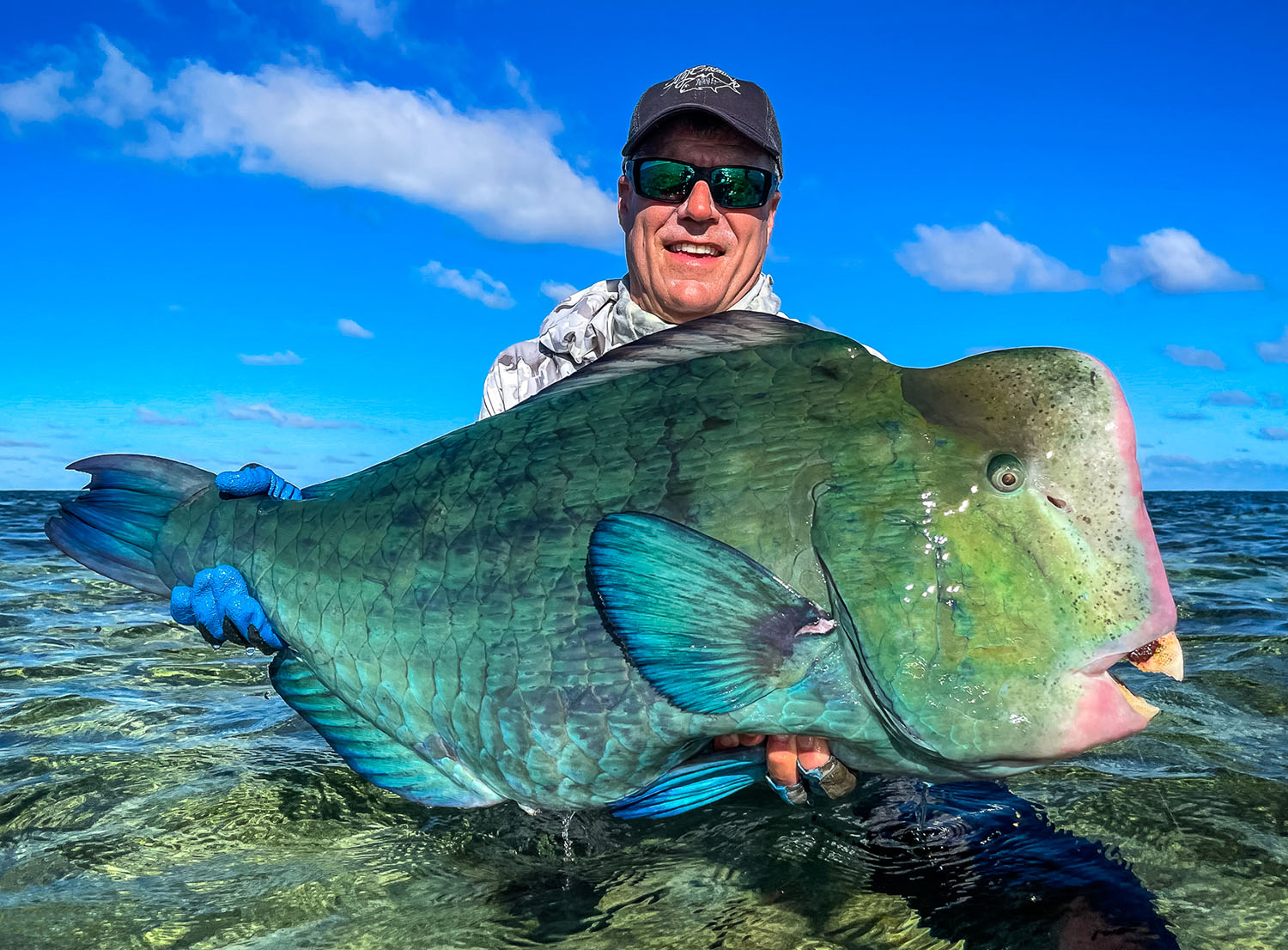 As the season ends in Providence Atoll our guides at the Lodge are now writing up their catch reports, the fourth of which is now in.

Welcome to the fourth week of the Providence 2021/2022 season. After picking up our new group of guests and welcoming them all aboard the Maya’s Dugong we set sail for Providence with an energised expectation of what the atoll had in store for us and our group of 12 new friends.

The first day dawned with clear skies and a southeasterly breeze. A great day of GT fishing was had with a total of 34 GTs landed. Al, Hal, and Bryan all managed to land their first GTs on the fly while Chris enjoyed fantastic success on his first day on Prov’s flats landing 12 GTs by himself, two of which broke the magical meter mark!

Day 2 saw a strengthing of the south-easterly breeze which had been absent for the previous week. Nevertheless, our group enjoyed yet another cracking day on the flats on the GT front with a total of 26 landed. Bryan enjoyed a moment of Providence magic while wading onto an exposed sandbank. He saw a large dark shape come into range and following a great presentation and a few quick strips he went tight and eventually landed a beautiful Giant Trevally of 102cm. Bryan didn’t stop there and went on to land an incredibly strong Bumphead Parrotfish, his first and the first landed by our group for the week. Well done Bryan!

Day 3 dawned with a stiff south-easterly breeze and conditions that allowed us access to the difficult-to-reach areas of the atoll. A total of 19 GTs were landed for the day with Dave and Tom managing to open their accounts for the week.

Day 4 dawned with clear skies and another opportunity to explore the far corners of the atoll which resulted in our group landing a total of 13 GTs for the day. While wading the edge of an exposed flat, Ken spotted two fish cruising the edge heading in his direction. He presented the fly with a good lead on the fish, stripped and watched as his fly was engulfed. After a long first run he landed a beautiful fish of 102cm, well done Ken! Whilst watching a massive school of tailing Bumpies wave their tails in front of him, Al made a perfect cast, came tight, and landed his first ever Bumpie on the fly!

Day 5 saw the south-easterly stiffen again with the eastern horizon remaining clear of cloud cover and rain. A total of 7 GTs were landed by our group for the day. Catches of note included Dave realising one of his dreams by connecting with a real trophy GT in the surf zone. His trophy was spotted surfing in behind a school of Bumpies, and following a pinpoint cast, the fish rushed forward and engulfed his fly. A long fight ensued and eventually, Dave had his dream catch firmly in his hands. This powerful fish measured an impressive 113cm…well done Dave! Bryan continued with his good form from the previous few days of fishing and hooked and landed his first ever Triggerfish, which was soon followed up with his second Bumpie of the week. With the potential of that elusive flats slam on both his and guide’s minds, the hunt was on for the GT. He eventually went on to hook and land a lively GT that was spotted pushing a wake in very shallow water. Congratulations on a well-deserved slam Bryan! Hal also enjoyed success on the Bumpie front, ticking off the fish he had been most interested in from the start of his trip. Nicely done!

Day 6 dawned with a darker horizon and a continuation of the stiff south-easterly breeze. Tricky conditions from a visibility point of view resulted in a total of 4 GTs landed for the day. Ken enjoyed the highlight of the day when he found himself in the right place at the right time. A very large black shape suddenly appeared in front of him, he shot out a quick cast and after several strips, a huge mouth exploded out of the water connecting him to a turbocharged Giant Trevally. After a blistering first run and a nervy battle to the end he eventually landed a monstrous fish that measured 122cm…..another fish of a lifetime! Bryan then found himself amongst the Bumpies yet again and managed to land his third for the week, closing his weeks fishing on Providence in style.

Another week of tremendous fishing was enjoyed on Providence Atoll. A special thanks to all our guests who joined us this week, we had a blast exploring Prov’s flats with you all and we look forward to welcoming you back soon.