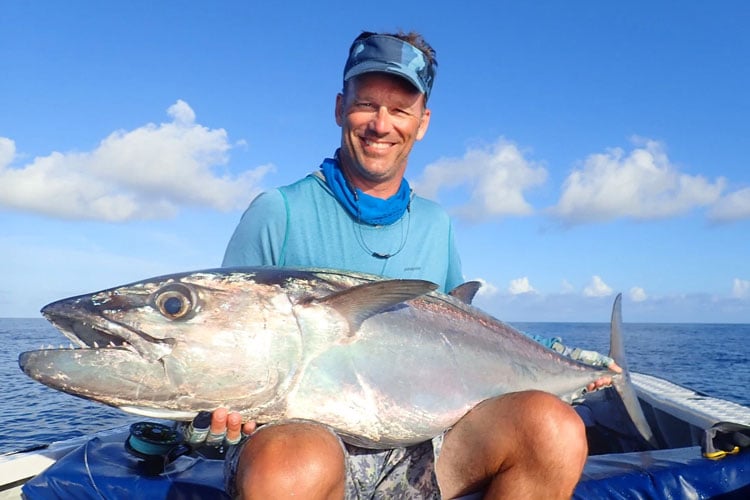 Welcome to our opening trip report for the 2019 Providence Atoll season. This particular trip being of the extended sort including 8 fishing days enjoyed by a closed group of friends. The weather, for the most part, was extremely warm and sunny, with almost no wind to speak of. We experienced neap tides to start with which progressed to spring tides with larger tidal ranges during the middle period of the trip. This allowed us to access different areas of the atoll and provide our guests with a variety of fishing scenarios.

Day 1 – The GTs were around in good numbers today with Kelly breaking the ice and landing our first of the season. Ivan, Scott and Kelvin also managed to land their first for the trip, Kelvin’s fish a very special one in that it was his first ever GT on the fly. Kyle started his trip off with a bang landing 2 for the day, whilst Ryan had a superb day landing 3 fish. On the species front, Scott landed a beautiful Yellow Margin Triggerfish but it was the late afternoon Milk fishing that stole the show. We found large shoals feeding just beneath the surface and not far from the Dugong’s anchorage. Ivan, Ryan and Kelly all capitalized on the action, each of them landing their first ever Milkfish. Well done guys! A great first day of the season and exciting signs for the remaining days of week 1 on Providence Atoll.

Day 2 – We started our day on the flats with a couple of hours of a small neap dropping tide, followed later by a slow rising tide at midday. The GTs greeted us in decent numbers with Mike and Dick both landing their first for the trip. Kyle, Kelly, Ryan and Kelvin all landed good quality fish but it was Ivan and Scott who stole the show with two fish each. Well done guys. We experienced some great Bonefishing today with Kelvin’s 22-inch fish the nicest of the bunch. Good numbers of Triggerfish and Bumphead Parrotfish were encountered during periods of the day. However, it was the late afternoon Mill fishing that once again grabbed our attention. Multiple hookups were experienced, sadly however Ryan’s second fish for the week was the only one that made it to the net. The group is clearly having a blast and we are looking forward to what the rest of the week has in store.

Day 3 – We began the day with a good dropping tide in the morning and a solid push in the afternoon. As expected, the GTs continued to present us with great opportunities. Kelly landed a bunch whilst Mike enjoyed a stellar day by getting three to hand. A couple of larger fish were encountered today, Scott’s beautiful 99cm fish and Ryan’s 113cm brute rounding off yet another very successful day. The Milkfish continued to provide some really exciting fishing, however, we were unable to land the numerous fish that were hooked. 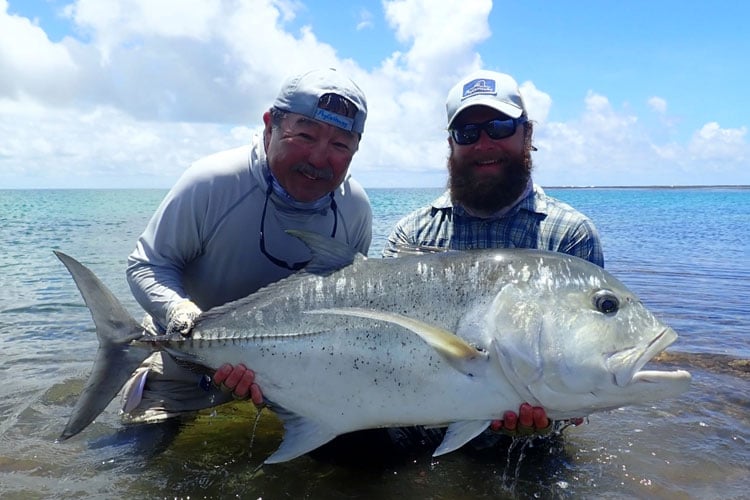 Day 4 – The GT fishing impressed again, providing our guests with numerous opportunities as well as a couple of shots at some real giants. The highlights today included Ivan’s 104cm trophy and Kyle’s absolute monster which stretched the tape to 115cm. Congratulations Kyle, certainly a fish of a lifetime! The Milkfish continued to provide exciting late afternoon sessions, Dick showed great composure and landed his 1st ever Milkfish on the fly after losing a couple earlier in the week. Congrats Dick! 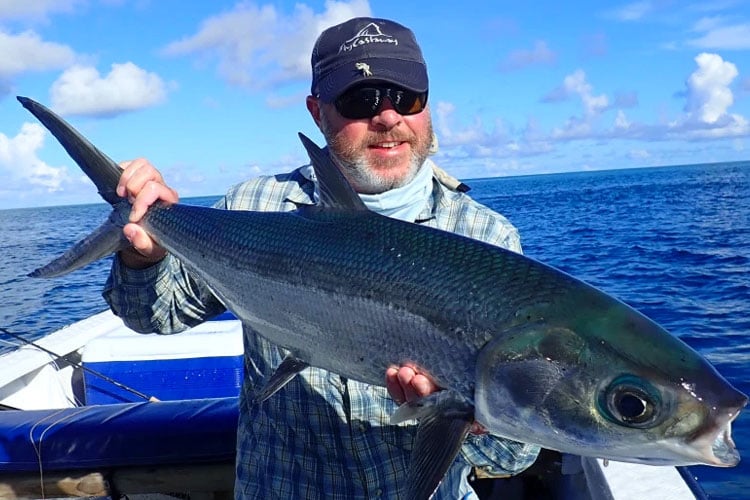 Day 5 – The GTs continued to steal the spotlight and as expected there were no complaints from our anglers. Mike landed three but it was Kyle’s seven fish day that really stole the show. Well done sir! So far we have been treated to every kind of GT fishing with good numbers of fish seen on stingrays, fish caught while pushing bow wakes on the turtle grass flats and others picked up in the surf. Super exciting signs for the coming days! 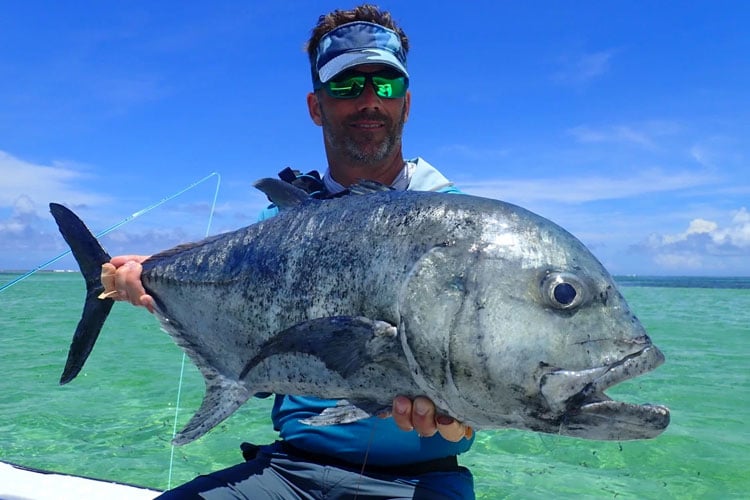 Day 6 – No changes here and some great fish coming to hand during our 6th day out. A huge congrats to Kelly on an unforgettable fish which measured 109cm and to Kelvin who celebrated his birthday by landing an awesome 104cm fish. Another great day out on the wild flats of Providence Atoll. 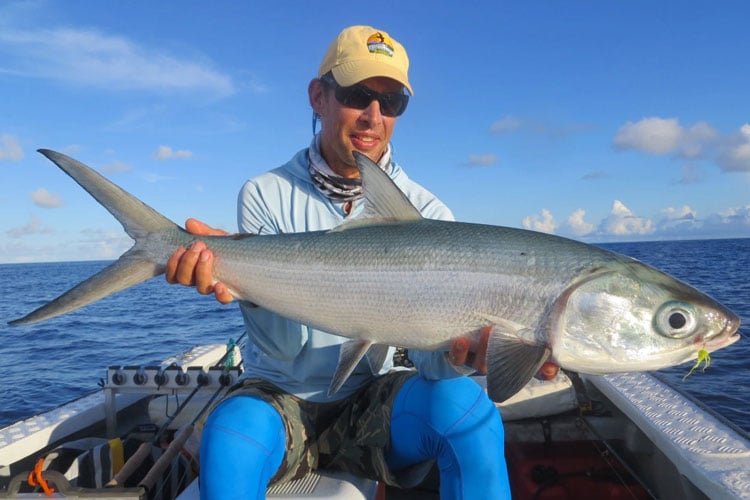 Day 7 – We crossed paths with some enormous fish on the flats today, with multiple sightings of fish in the range of 100 – 130cm. The boat was a buzz with stories shared on the back deck over a few cocktails in the early evening. Big fish don’t come easy though and so most incidents included some misfortune or stage fright at the wrong time. Although we weren’t able to get any of these massive fish to hand our guests still managed to put a few on the board before the days end. Last but not least, our friend Ivan landed his first ever Milkfish on fly. Congrats Ivan! 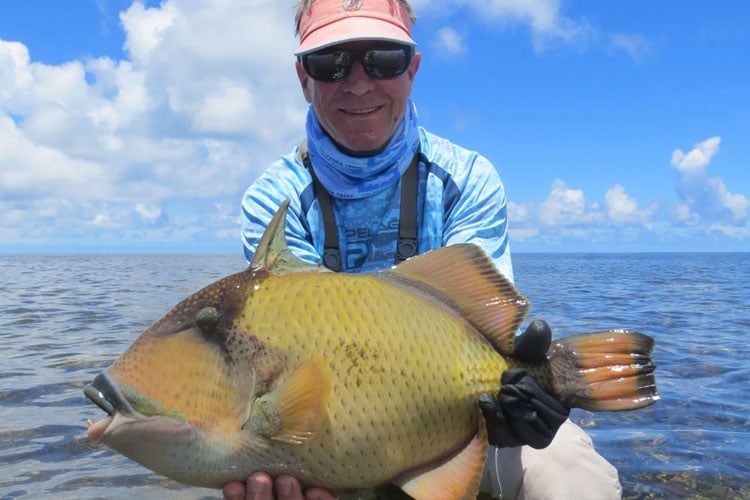 Day 8 – For the first time this week we experienced heavy cloud cover which resulted in bad light and thus made spotting the fish a whole lot more difficult.

All in all, it was a fantastic week. Sure, the GT fishing took up much of our time and rightly so. The huge diversity of species the atoll has to offer is certainly worth mention – Napoleon Wrasse, Bohar Snappers, Groupers, Bluefin Trevally, Sailfish, Dogtooth Tuna, Permit, Triggers, Bones and Bumpies all made appearances. The catch stats below will keep all who fish Providence coming back for more:

Lastly, thank you to our group for another fantastic week of fishing. We’re already looking forward to our next adventure together in the coming seasons.