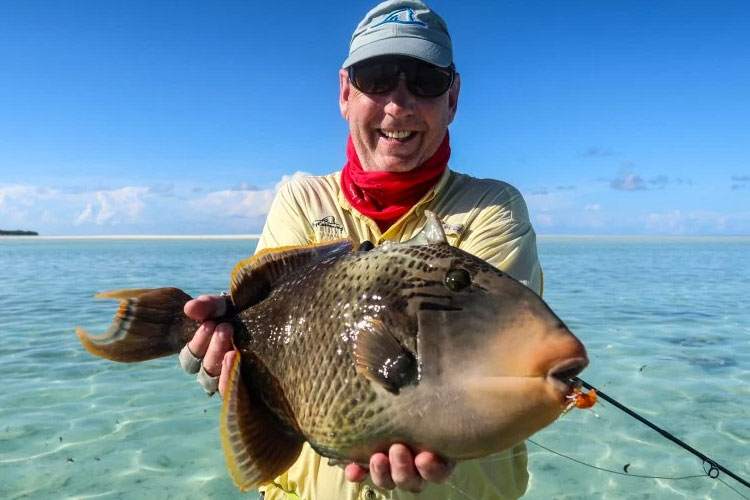 Day 1 – Our fourth week of the season on Providence Atoll started with full moon neap tides, a slow dropping tide in the morning and a late afternoon push. Mike wasted little time and opened his account in style by landing a monster 102cm GT on his very first cast of the trip! Chase made the most of the numerous GTs seen today and landed 3, while Tim also enjoyed his day and managed to get 2 to hand. We encountered a good number of tailing Triggerfish on the flats today, however Terry was the only successful angler on this front, landing a lively Yellow Margin Triggerfish. The Bumphead Parrotfish were also seen tailing on a number of occasions and eventually after a couple fish that were hooked and lost, two of our guests landed Bumpies for the day, 1 a piece for Bowen and Chase. An eventful start to the week on the flats of Providence that left us excited to see what the rest of the week had in store. 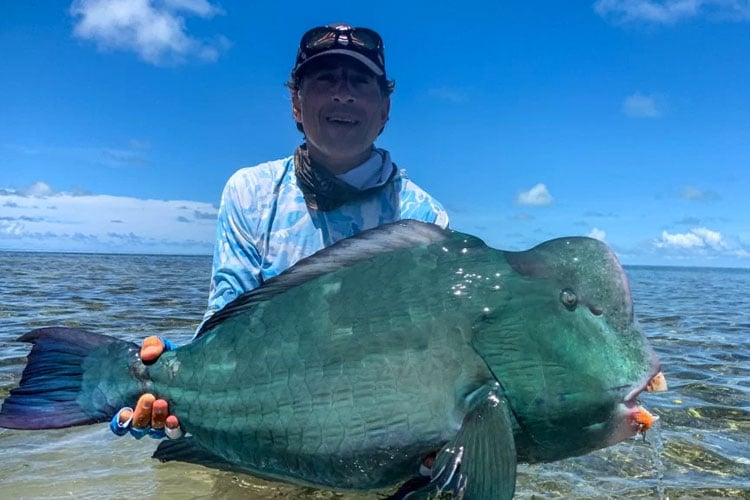 Day 2 – We came across loads of Bumpies today feeding hard and willing to eat a well-presented crab imitation. Well done to Mike – after losing 12 of these fish he finally managed to get the upper hand by not only landing 1 but 2 great fish! Zack also experienced good fortune on the Bumpie front and managed to land his first Bumpie too, well done guys! These slow-moving tides have made it ideal for tailing fish and thus we encountered incredible numbers of Triggerfish, Tim took full advantage of this and landed a colorful Yellow Margin Triggerfish. Despite the slower than usual GT fishing a couple of great catches were still enjoy by our guests; Tim managed to match yesterdays exploits and landed another 2 GTs. Tony had an incredible day by completing a Slam, he landed – a 98cm GT, a Yellow Margin Triggerfish and topped it off with a Bonefish, well done Tony! 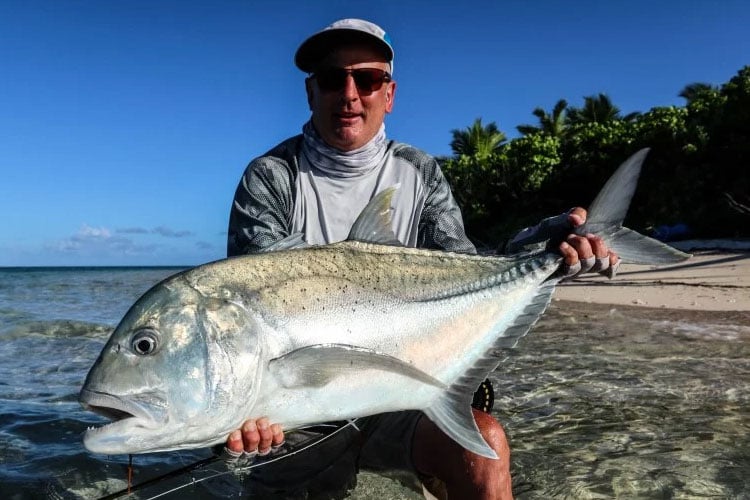 Day 3 – The GT fishing really picked up a couple gears today with us coming across a mixture of free-swimming fish, including GTs on sharks and stingrays. Mike Dawes landed 3, Tim landed 5, while Zack landed 4 including his PB; a great fish of 104cm that was caught while it pushed a wake on a turtle grass flat, completely engulfing the fly as soon as it hit the water and then it proceeded to give us a good tussle before coming to hand, congrats! The Bumpies were still around in good numbers with Mike managing to land 1 and Paul landing 2, well done guys. Tony converted his chances with the Triggers yet again and managed to land an awesome Moustache Triggerfish. All in all, it was another great day out on the flats with some fantastic fish coming to hand. 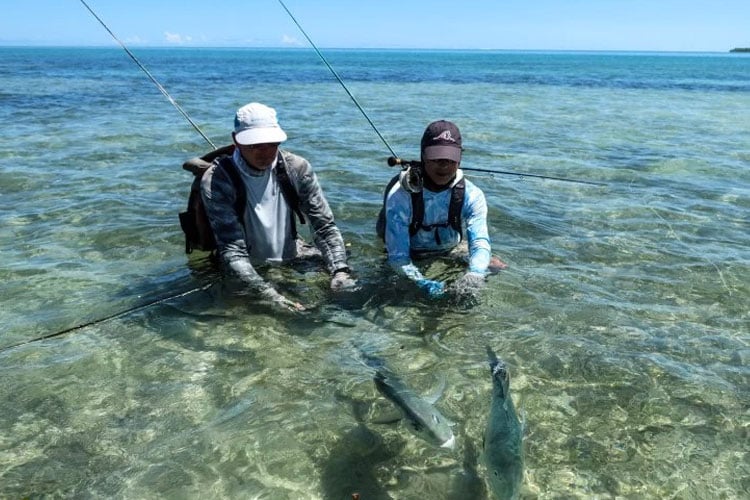 Day 4 – The tides have progressed to new moon neap tides with a slow morning push. The GTs were around in solid numbers and our guests experienced some unforgettable moments with GTs tailing in schools, smashing any baitfish pattern presented to them. Tony had an amazing day and landed 8 GTs, a huge Yellow Margin Triggerfish and a Bonefish – completing his second slam for the week, great job! Bowen, Chase and Bob also had a great day and landed 10 GTs between them; Bowen getting his PB with a trophy of 100cm, well done Bowen! Meanwhile Terry added to his tally and landed a solid GT measuring 93cm. The Bumpies and Triggers were seen again in great numbers but unfortunately, they got the better of us, we looked forward to trying our hand with them again tomorrow. 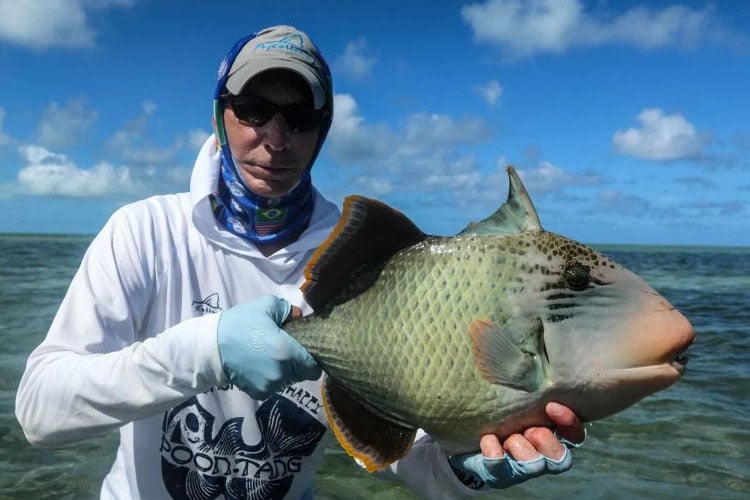 Day 5 – The GTs were around and patrolling the flats and lagoon systems off the north eastern side of the atoll. Some of our guests experienced 60+ fish cruising on the backs of lemon sharks, ready to attack anything that crossed their path. Tim had a great day by landing 4, with his biggest being a fin perfect specimen measuring 100cm. Tony also managed to land a trophy GT today measuring in at 100cm. Paul also got some decent GTs today, landing 2 and a prized Yellow Margin Triggerfish. Finally, Mike had a special day too and managed to add another 4 GTs to his tally for the week. 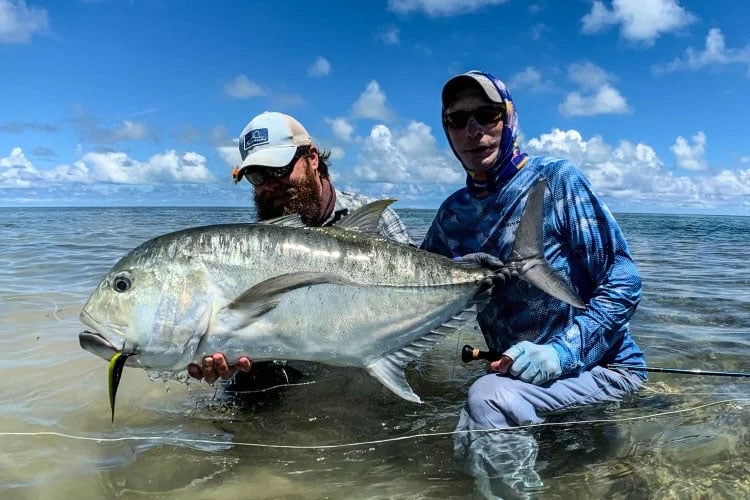 Day 6 – The fishing has been great all week with the new moon neap tides delivering a variety of different fishing scenarios which has allowed our guests to enjoy a large range of special catches. Everyone was very keen to get straight out there today and see what the flats had in store for them on the final day of their trip. Tim, after losing 11 Bumpies this week eventually got the stars to align and landed his first in the dying moments of the day, well done Tim! Our good fortune with the GTs continued with us crossing paths with loads of GTs. Mike and Zack landed 3 each, Paul managed to land 2 and the biggest for the final day, measuring 95cm. Tony continued his great form on the flats and managed to land 3 GTs, yet another Yellow Margin Triggerfish and 3 Bonefish to complete his 3rd slam for the week, what a way to end your 6 days of fishing on Providence Atoll. 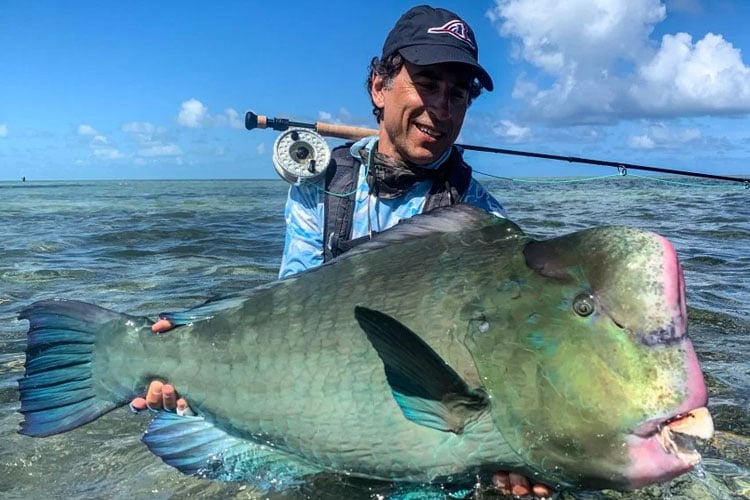 On behalf of FlyCastaway we would like to thank all of our guests for a great week out on the flats, we had a great time fishing with you all and we hope to do so again in the not so distant future.