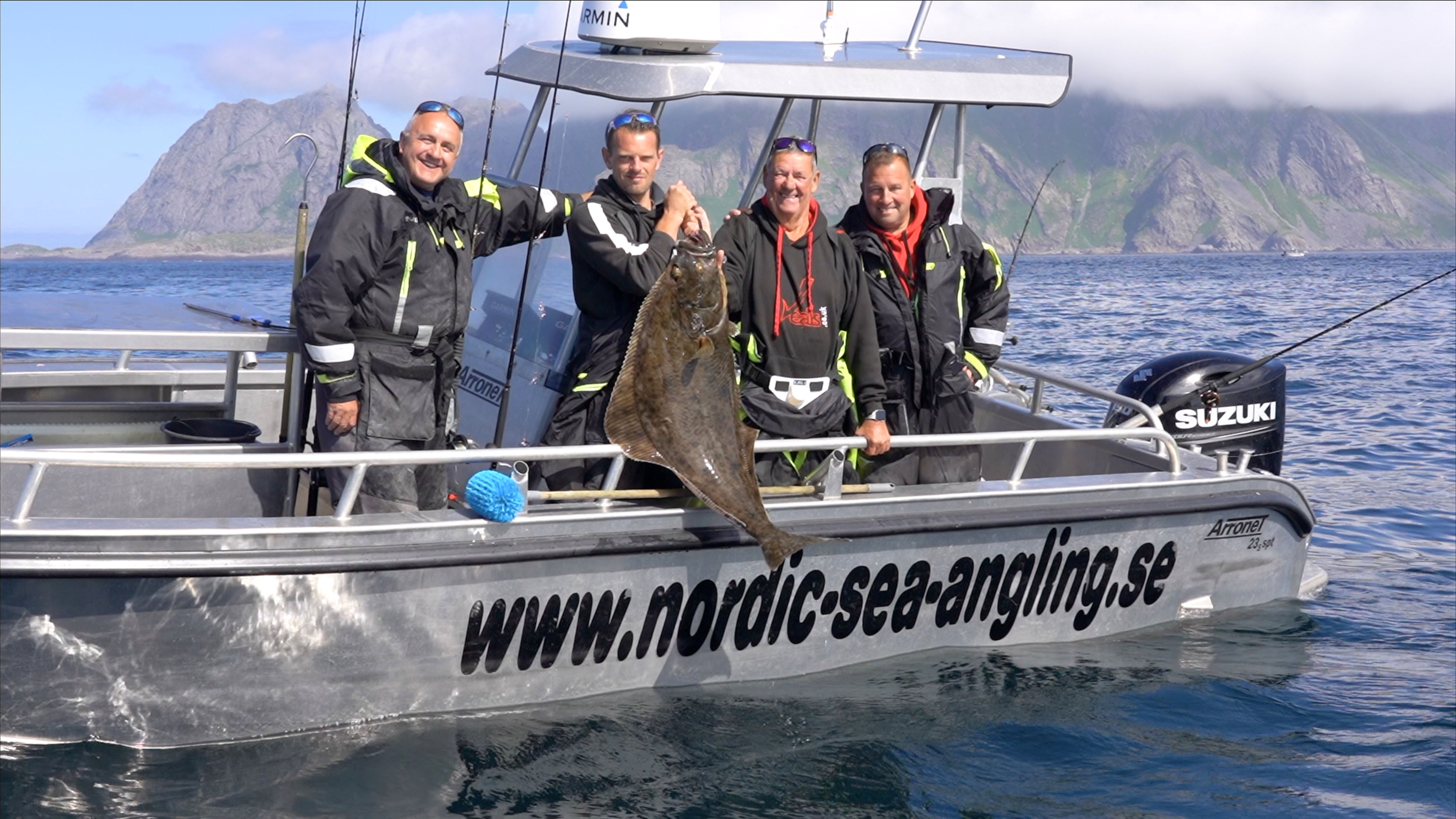 We’re now a couple of weeks on from the first ever Sportquest Holidays Halibut competition, and what a competition it was. The event was run over two days at the beautiful destinations of Å on the Lofoten islands in Norway, and it saw nine teams of four anglers battling it out for over £5,000 in prizes. With a £4,000 prize up for grabs for the winning team who caught the longest accumulative length of Halibut and a £1,000 prize for the angler who caught the longest Halibut. You can read the report below and also watch the full video of the event.

All the competitors had two free days before the competition to familiarise themselves with the boats and to go out fishing to find some spots, ready for when the event started. Fishing was permitted between 7.00 am and 5.00 pm, and the boats had to be back by the dock at 6.00 pm to hand in their scores.

The teams fishing the event were:

It didn’t take too long before the first call of the day came through on the radio, with the Olyungens landing a nice fish of 121cm. The fishing throughout the first day was steady, with most teams carding at least one Halibut. Along with the 121cm fish landed by Olyungens, there were also two others over 100cm caught, with Aquaholics Anonymous landing one of 113cm and The Valibuts landing the biggest fish of the day at 138cm.

By the end of day one, GB Sea Monsters topped the leader board with 296cm, made up of four fish. Less than 100cm separated the next five spots, with Olyungens in second place with 212cm and Aquaholics Anonymous in 3rd with 193cm. It was still all to play for on day two.

The fishing on day two was much more like it, and every team landed at least one Halibut; however, the leaders from day one, GB Sea Monsters, got off to an absolute flyer,  landing a lovely fish of 150cm by 9.00 am. On our tour around the boats, we witnessed the Suffolk boys land an excellent double hook-up, and Sin City Rockers landed one of 134cm. It was going to be a close run event.

After the end of the second day, and as all the boats returned to the dock, there was plenty of chat about who had caught what and who could be the potential winners.

After much checking of everyone’s pictures and after tallying up the totals, it worked out that over the two days, over 3,000cms of Halibut had been landed, including six fish over 100cm, which shows how brilliant the destination of Å is. Finishing in third place was Sin City Rockers with 400cm, in second place was Olyungens with 532cm and in first was GB Sea Monsters, with 654cm. Finally, the biggest fish of the competition, measured in at 150cm and was landed by Bill Scott of GB Sea Monsters.

Later that evening, everyone enjoyed a few drinks in the local restaurant for the presentation, where the team and individual trophies and cheques were presented, along with a free raffle, with a guaranteed prize for every competitor.

It was a great way to end a fantastic couple of days.

If you would like to know more information about the amazing fishing camps we offer in Norway, visit our dedicated country page. Alternatively, you can contact our sea fishing expert Paul Stevens on 01603 407 596 or email at paul@sportquestholidays.com.

Don’t forget to follow our dedicated sea fishing social media pages to keep updated with all the latest news and catch reports from around the world.

The 2022 Sportquest Halibut competition was supported by…