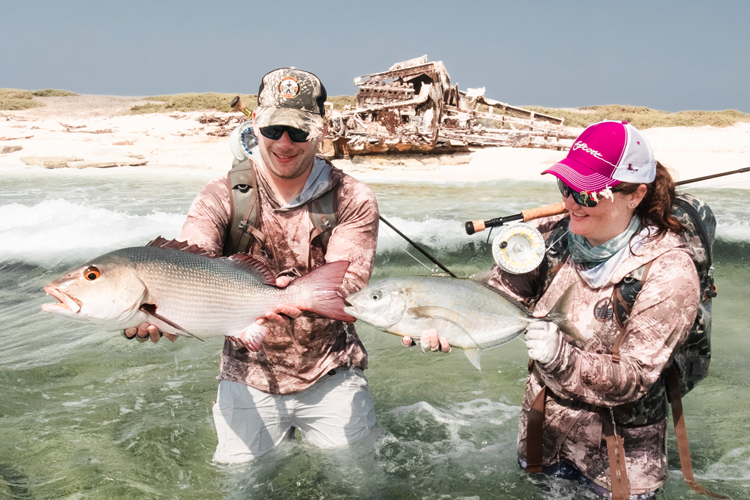 What a week its been out on A! The guests this week were lucky to be able to fish a nice new drift far out from camp, and it’s safe to say it definitely produced!

At the beginning of this fishing week, we had very good weather with light winds which enabled a new exciting long trip. On Friday morning, seven of this week’s boat teams gathered, and at 07:00am, we started heading towards new unexplored areas.

Once in place just before 09:00 am, all boats lay fairly close to each other to fish the area as efficiently as possible.
In the guide boat, Dennis barely made it down with his jig before he hooked a nice cod of 10kg +. A fun start with activity immediately, but the goal was set on the heel for all boats so this was seen as a nice bonus.

There was tension in the air before the first contact with the Halibut came and it was boat 3 that shouted over the radio maybe 15-20 minutes into the fishing that they had landed the day’s first Halibut of 110cm +. Just minutes after this, Dennis in the guide boat who fishes with his crazy daisy 400gr fancy cola, who gets a good bite a few meters above the bottom. He sees that this is a big fish and everyone else takes and cranks up to reduce the risk of tangles and rope breaks. It was a cruel fight from the fish with a good 70-100m in the first rush, Dennis fights well with hard brakes and fights the fish rock hard, and after just over 7-10 minutes, the fish comes to the surface but just before we can try to land the fish it turns down to the depth, its just getting started for Dennis!

After the second long rush down to 65m, he starts to get a little lactic acid and shaky arms but we fight on and after another 7-10 minutes we see the fishing again and this time we managed to get it all the way up and could immediately put the Halibut hook in and safely secure the fish at the boat edge to measure this DREAM fish to a full 184cm !! After measurement and photographs, we got to see the queen swim home again.

But at the same time as we in the guide boat were drilling this nice fish, we got a report from boat 3 that they are fighting a really big fish too. A little later, they too could land a fish of 180 cm. Most of the day was focused on the Halibut during this long trip, but there were a couple of really good bonus Cod and Coalfish up among the boats during the day. We in the guide boat ended the day with a good double cut of 16 and 18kg cod.

The week has been quite tough for many boats with a lot of small fish and no real bites from the Halibut. The Cod fishing has been good for the month of August with LOTS of Cod between 5-12kg, with not just one but several cod between 18-22 kg as top catches for the week. Finally, we had a little tougher weather again the last two days, which made everything even more difficult to fish and somewhat restrictive in fishing areas. Now we are charging for a new week on Å!