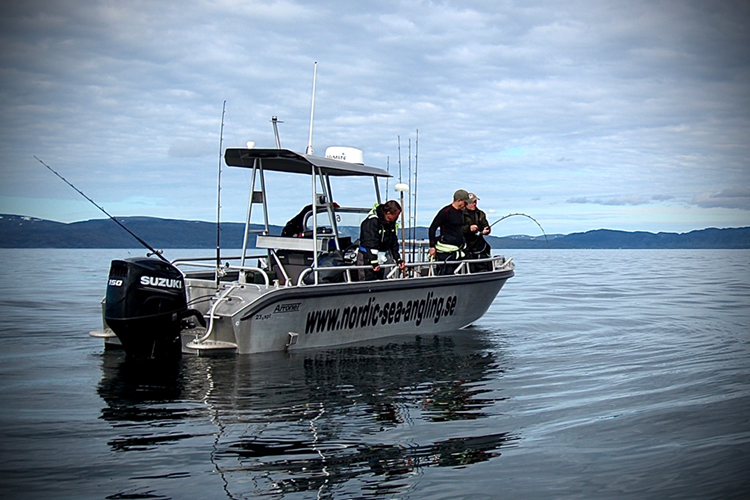 With more and more of our customers now starting to move between the UK and Norway, we should actually start to get reports from our customers. We have a group due to arrive at Havoysund as I write this, 23rd July 2020, and Douglas the guide is looking forward to seeing his first English guests since September last year.

He has had a mixed bunch of anglers with him over the last week but all of them had one thing on their minds and that was Halibut fishing, and he hasn’t let them down. Douglas has forwarded us his report from the last week and is stoked that he has got more clients this week as the fishing is off the scale at the moment.

Then another week was over here in Havöysund, thanks to nice weather conditions throughout the week, we have spent many hours at sea every day. Initially, we spent a good amount of time Cod fishing with the Norwegians in the guide boat on the first day, this resulted in lots of nice cod between 8-15 kilos, not only that, but we also caught a bunch of nice Wolffish and an angler called Egil pulled a nice bonus Halibut on 95 centimetres. When the tide picked up we had to test another spot that was a bit calmer, then it only took a couple of minutes before Björn Roger smacked on a better fish that fought really hard. It turned out to be a super nice Halibut of 122 centimetres which resulted in a new Halibut PB for Björn already the first day.

On the second day, we and the Lithuanians in the other boat set off in search of big Halibut, we fished a fast current area where the fishing had been good a couple of weeks ago, it only took a few minutes on the first drift before the first fish took a lure.  Trond got to pose with a nice fish of just over a meter. The very next drift it tears away again for Björn’s and after a really good fight, we got a really nice Halibut at 122 centimetres. The fishing continued a bit sluggishly after this for us, but in the meantime, the Lithuanians fishing a little way away from us caught a couple of nice fish of 145 and 143 centimetres which felt really good, however, the fishing was tough for all of us after this. At the end of the day, the Lithuanians in boat 6 pulled another nice one of 149 centimetres, really nice.

After the good double bite with fish in the 110-centimetre class, we quickly changed the drift and after landing another nice food fish, Egil and Trond had a double bite, yes, there was the second double bite of the day, but this time there was lots of weight in Trond’s rod and after an intense fight where the lines crossed each other and we often thought that someone’s line would snap, we also managed to land both of these fish at 115 and Trond’s super nice fish at 150 centimetres! The first 50KG+ of the day was landed and the guys in the boat had a bit of a hard time grasping what was happening but the fishing was really on fire. Yes, we fished and caught several nice fish on that spot including Egil who pulled up a really nice PB Halibut of 139 centimetres a while after 150 centimetres.

The fishing continued to be really good and after a few hours we tested a new area that usually delivers larger fish and during the second drift, the Lithuanians pounded up a cannon fish of 177 centimetres. After that, we went to another new area which we can usually catch plenty. We had to wait for a while before they started but when they got started we had fish again in every drift over the small peak we fished around. When the heavy rainfall came in the evening, the big Halibut stepped in and Egil was up next when he first missed a fish that pulled away with his baitfish, immediately after it bites again but this time it hugs the bottom and we immediately realize that it’s talk of a better fish. Sitting like a real king, really comfortable in the cushioned chair in the cabin, Egil presses the heavy fish.

Egil was determined that he would not fish any more and was satisfied and that now the bait fishing had run out in the boat. But a couple of drifts and a couple of smaller Halibut later, Björn finds another bait in the fish box under the Halibut we had saved, he gives this to Egil and Egil thinks he can pull one last fish for the day so he lets go. I’m not kidding when I say that he’s serious and as soon as it hits the bottom it pulls away for him again and when he puts the hook in this fish it speeds away in one of the sickest rushes I ever saw, completely crazy and when we got to reel them in line so we were straight over the fish again so we noticed that it was again really good weight in the rod for Egil. This fish was mental and offered another bunch of violent rushes, and then from the mirror-shiny sea another really nice Halibut broke the surface and I was able to secure another dream fish for Egil of 162 centimetres! So he managed to reel up two huge fish in record time and we felt after this that it was time to call it a day and go home. In addition to a really good number of Halibut and many of a good size, we were able, to sum up, 6 landed double bites in the guide boat, which is really fun!

Now I recharge the batteries for a new week and we are now visited by more nationalities such as England and Sweden, the weather forecast again looks completely magical for the coming week and it looks like we get summer temperatures and radiant sun all week.

Well what can we say Douglas apart from well done for making anglers dreams come true. It is a real pleasure to read your reports and with many of our anglers chomping at the bit to get out to you this will tip them over the edge. Lets all hope for an amazing last part of the season and many anglers smash their PB’s.