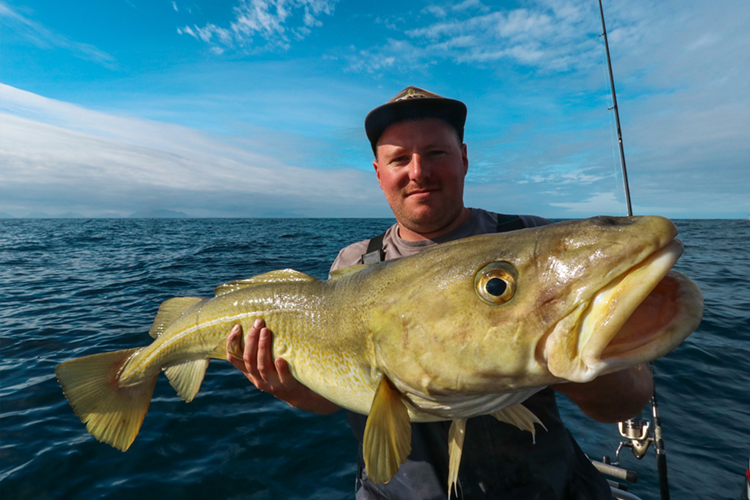 The Halibut are out in full force in Vesterålen!

Vesteralen is on fire at the moment! We dont think a day has passed without a 150cm Halibut this season! We are all wondering to see if a new World record rises to the surface soon!

For now its over to Daniel Freland, Jørgen Zwilgmeyer & Håkon Nilsen for their report of the week!

With tough weather on the first day, only a little fishing was done in the immediate area, the forecasts showed fine weather next day! After talking to the guests, we decided to focus the fishing on big Coalfish and also try a little bit of Halibut hunting. The previous day’s rubbish weather meant that the morning’s boat trip to the fishing spots was quite foamy but clearly fishable!

The guests in boat 4 started the day strong with a Coalfish of about 15 kilos and shortly after that it started to hail reports on the radio about big wins and nice Cod, Daniel who guided Mark and Ian in boat three had a complete clearing with Coalfish in between 12-15 kilos of which the longest Coalfish measured just under 130cm, a real dream fish that made Ian have a smile that gossiped about fishing fever! Even boat 3, which was guided by Jörgen, had an incredibly good time fishing for Coalfish with really nice fish up to 15 kilos! Jörgen’s boat also made a shorter attempt at Halibut with the result of two fish of a slightly smaller caliber. There was also a nice Plaice of 42 cm during the Halibut fishing with Plaice tackle!

At lunch the wind subsided and the clouds disappeared from the sky, the sea settled like a mirror and the sea came to life again. The amount of fish found on the west side was really incredible, Baitfish shoals in the form of Coalfish and Mackerel stretch in the size of several hundred meters and when the tide began to rise again, the area’s many predators began to seek their way to the tops! The Englishmen from Sportquest who were guided by Daniel and Hakon lay on one of the peaks at the far end and all of a sudden the sea around them started to boil, the great Coalfish and the Cod pushed up the prey fish around the boat and as soon as you lowered down with baits only 15 meters below the boat, it is not long before there is either a big Coalfish or a Cod in the ten kilo class on your hook! The day ended with a playful fishing competition between the boats which was only about 20 meters apart.

Regarding yesterday, we can not really find words to describe the fishing. Jörgen and I have previously talked about going to an area to the north that looked incredibly hot! After the guests got hungry for a little exploration, we decided to go to the area we looked at. Once in place, the fishing started relatively sluggishly, only a few Cod and a lot of “nice” guys, Daniel and Hakon who again guide Mark and Ian decided to test the top at the far end where it goes from a depth of only 4 meters down to 150 meters in a single steep edge, Jörgen who guided boat 4 hung on and they also started to get several nice Cod and Coalfish.

After a while, Daniel reported that Mark teased Halibut and that it was of a larger size! The Halibut that took Mark’s Mackerel went completely crazy and being hooked in the open water at a depth of 128 meters did not make the fight easier, after a while Daniel got the Halibut under the boat and saw that it was a really nice size but only a few seconds later it decides to swim 120 meters straight down to the bottom again in a single rush with a rock-hard brake, the minutes passed and finally the fish began to approach the boat, Jörgen and company lying next to him when landing the Halibut could take really cool pictures of which one of the pictures where you clearly see the Halibut completely above the surface! After the Halibut calmed down, it could be measured to 174 cm, Congratulations Mark on a real dream fish.

Shortly afterwards, the guests in Jörgen’s boat also hook a really nice fish on bait with a 2.5 kg Coalfish attached, after an intense fight where the fish swam several times under the boat and down to the bottom, Jörgen was finally able to land a really nice Halibut of 162 cm! After that the fishing started to die off around the base and all three boats started to search further in among the gutters to see if there were flounder there, Jörgen’s boat has a nice contact, and then Ian in Daniel’s boat misses a really nice fish that totally swallowed a flapper of 3.5 kilos, and with experience of what is the caliber of the Halibut in the area, one hardly dares to imagine how big that Halibut may have been…

Due to the bad weather that was approaching, we decided to pack up and head home, but before returning home, another Halibut would be landed. When Jörgen shouted to the guests in boat three that it was time to go home, he got the answer that it was not quite possible yet as they had a Halibut on for 45 minutes which now began to approach the surface! Both Jörgen and Daniel set course directly for their boat and arrived just in time to witness the landing of a terribly nice Halibut of 180cm, This was also an act of really good revenge as they lost a really big Halibut that swallowed a lump just under the boat. Once again, the area has delivered a really nice Halibut and congratulations to the catcher Andy on a real dream fish! One cannot complain with the day when all boats landed Halibut over 160cm.

Today the weather is a bit windy, so the guests are close to the camp in search of the Halibut, so it will be exciting to see what they manage to get up when they return! Tomorrow’s weather looks terribly good, and we aim to get out west again! Stay tuned for upcoming news and reports from Vesterålen!

We are starting to get more and more jealous of our customers each day! Well done to the guides and anglers for the superb week!