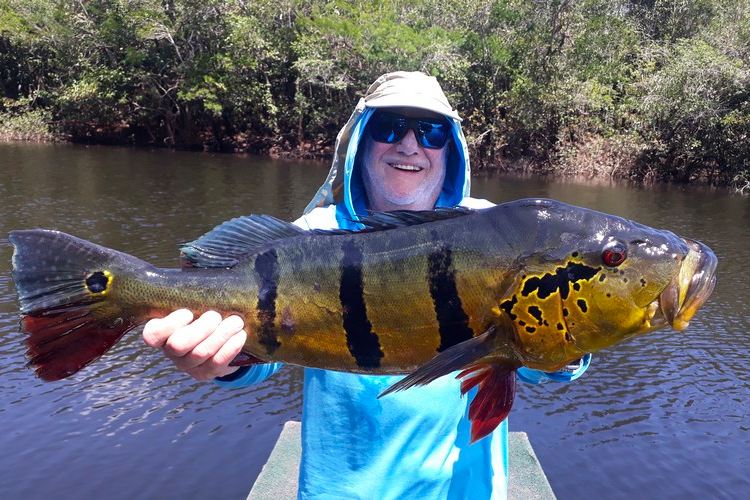 Although this report has come late from the guys over at River Plate anglers, its certainly not one to miss. This report sums up the final week of the season back in February of this year and to say that the anglers done well would be an understatement! Until next season!

We are closing the 2020-21 season with a final touchdown! The Richardson family on Fly-In River Train II with 6 anglers landed an impressive 1,093 peacocks, of which 152 weighed more than 10 pounds. Four of those weighed 16-18 pounds and one was a 19-pounder. The previous week’s party, Hublila and Krause, with 4 anglers, landed 877 peacocks, of which 59 weighed more than 10 pounds. Two weighed 16-18 pounds. Both parties landed a variety of other tropical fish, including Arapaima, Aruana, Sardinata, Tambaqui and Apapa.

Stats from the week

As the Situation Room had forecasted, water levels stayed two to three feet below the jungle line for the complete season. Fishing, as expected, was excellent (See water level report below).

River Plate Anglers has access to 10 private river areas that drain some 30 million acres of pristine Amazon rainforest populated almost exclusively by indigenous groups that allow River Plate to fish their waters on an exclusive basis in return for various forms of support. Having so many rivers is part of our River Plate Advantage™. The other part of our River Plate Advantage™ is keeping up to date on water levels in all those areas. We do that from an office complex in Montevideo, Uruguay, we have dubbed our Situation Room. There, we pore over river data and weather forecasts basin-wide on a daily basis to ensure our anglers fish waters that are in prime condition. Our competitors, with few waters to fish, poor mobility, and limited insight into basin-wide water level fluctuations rely largely on guessing and hoping. We rely on facts.

For more information on our Amazon river basin destination make sure to take a look at our tour page. If you have any questions regarding any of our tours, get in touch with us at 01603 407596 and one of our dedicated professionals will help you with your query.