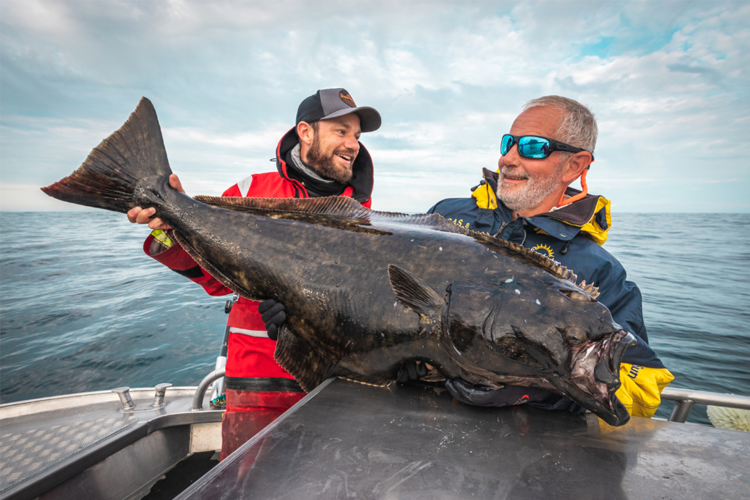 Two Anglers Catch the Same Fish at the Same Time?!

Nordic Sea Angling, during this Covid problem, has decided to open up to single guided days for people to just turn up and book due to the destinations not being completely full. So instead of having the boats and guides and cabins sitting around empty they have been offering the chance for people to experience trips guided without staying for the full week.

This has proved really popular for local people and other tourists. I’ll now hand it over to Nordic Sea Angling for this weeks Nappstraumen Round up.

One Fish on Two Lines?

This week we had Lars and Oskar from Sweden who had booked a 2 day Halibut guide with us in Nappstraumen. Since our guide Johan Mikkelsen is on-site and had helped land a Cod of 40kg to Lars a few years ago and also managed to land a Bluefin tuna abroad, he was a given choice but agreed that they also wanted to be guided by him during these 2 days in search of Halibut.

It was a nice meeting with some old faces with many old stories that were brought up during the tour. But today the focus was on Halibut and preferably a BIG one! The sight was set and they pulled out on the west side Lofoten in search of these mythical fish!

Johan starts by putting the first drift in a place that he recently found from the week before and not far into the first drift, it slams into Oskar’s rod (As before his journey had never caught a Halibut). It was very strong in the counter-attack followed by some powerful head shakes that made Oskar’s rod from one-second point straight up towards the sky to the next moment stink deep down towards the sea … down at the bottom. Then the calm but determined rush began from us. Oskar is powerless and takes everything he can to try to gain control of the fish. After a while with extreme pressure and a little guidance in his fighting technique, he manages to lift the head of the fish and with small pumps manages to get the Halibut up meter by meter… Everyone is on full swing and Oskar is struggling from both adrenaline and lactic acid in the muscles.

Johan gets ready with the halibut hook and when everyone thinks that now we have to see it, something inexplicable happens, the jig comes loose and two seconds later it is in the surface. Oskar breaks down and lies down on the floor, defeated by a fish that we never saw but which was still so close… It’s annoying but also part of the fascination with fishing, it’s never a matter, of course, to go out and catch a dream fish, it takes patience, many hours of wear and tear and everything needs to fall into place! This time we were in the right place, at the right time with the right bait and with the right technique, But still, the dream fish managed to shake loose in the final stage. A fishing story we will never forget!

All this happened during the first drift so we of course continued to fish a bunch of interesting places, not long after Oskar managed to land a strong Halibut of 114cm which offered a really great fight, which of course became his new PB and a fish that felt really good to land.

A little consolation prize after the big one who escaped. Then he hooks in another fish and in the next moment Lars also stands with his mouth wide open! We cheer double hookup and the two start fighting Halibut, which soon turns out to be the same fish! Oskar’s fish had in fact taken his bait to swim straight into Lars’ bait in the next second and in this way both of them could drill up this fish which was measured to a full 120cm!

A nice and unexpected teamwork that became a fun feature during the day! It was also a new PB for Oskar again! A total of 4 Halibut were landed that day and one large fish was dropped. A fantastic day that offered great weather and new fishing stories that we will never forget!

Thanks for the great report and huge well-done guys for all your new personal bests. This is what Norway is like for so many anglers, smashing PB’s every day. If you would like to discuss any of our Norway holidays call us anytime on 01603 407596