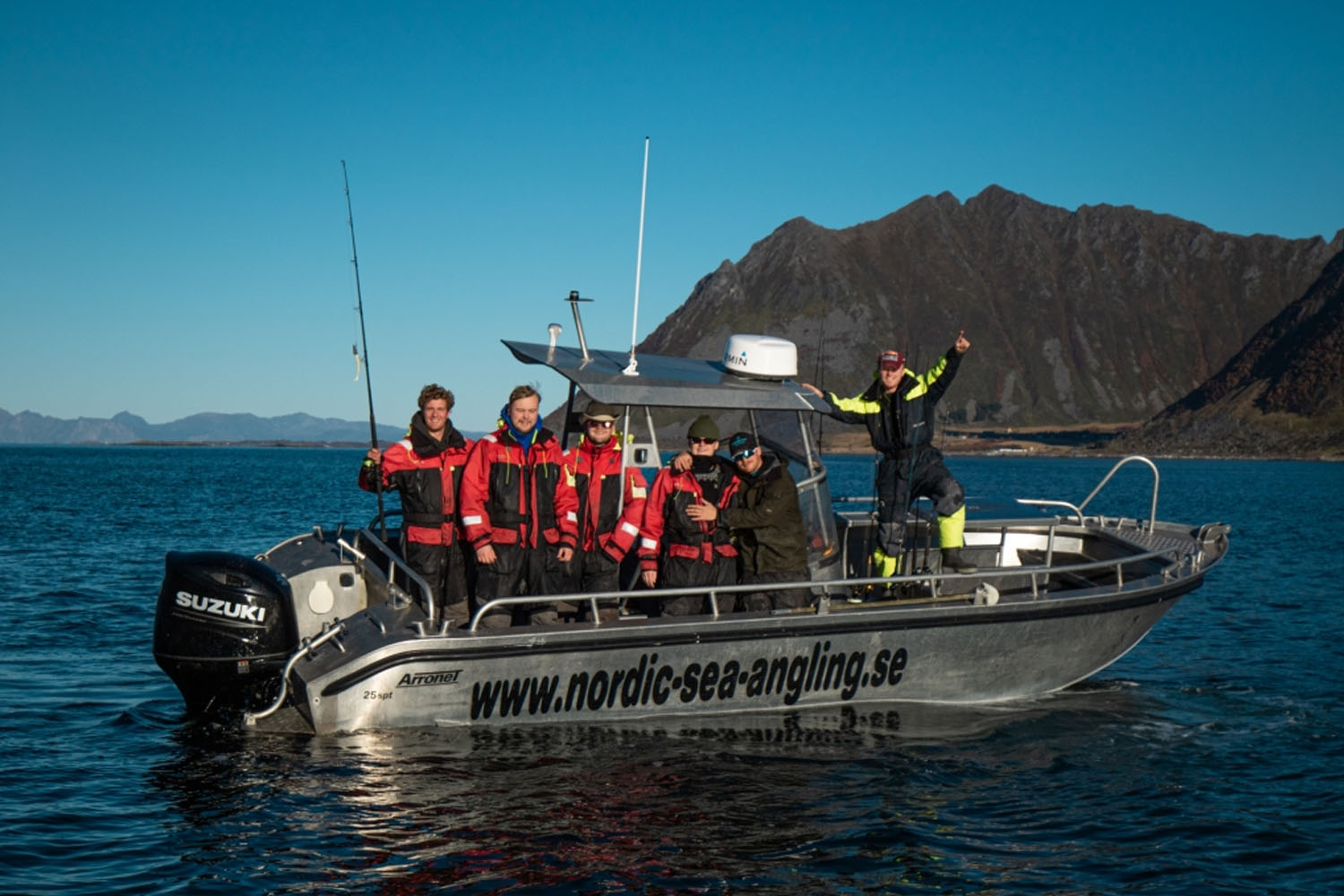 You can “calmly” say that autumn fishing has fully started here in Vesterålen. The temperature has finally dropped below 10 degrees, and it is noticeable that the Halibut have taken to the shallower water. There have been few guests at the camp lately, but Alex has been visited by his friends for a few days. Me and Alex have also squeezed in a few fishing sessions, and we have simply had some absolutely incredible experiences in the last few days. The biggest fish have been absent, but what does it do when you see these power plugs lift themselves from the bottom and go up to take the bait?

At the beginning of last week we had a visit from a group from Sweden in the Guideboat. The weather was extremely tough those days, and we were actually winded all weekend. But even though we were inspired, we rigged up several rods and drove around the peninsula here in the car looking for sea trout. Although it didn’t produce any special catches this late in the year, it was good to have the rods waved a bit. We also used these days to look around, and take the Swedes on a sightseeing tour around the area. And although this was not the main goal, it was very nice to go to the local flea market and see the beautiful beaches and mountains on the outside of Vesterålen.

Fortunately, the weather would change on the last day, and it was much better than expected. Alex led the gang out on Tuesday morning, and even though it was tough in the morning, the weather turned quickly, and it lay like a mirror beyond the fjord. With changing good weather conditions, the Guideboat put the snout out towards some of the Cod shallows further south. The sea had subsided completely, and the cod was present after the storm! The Swedes pulled fine Cod up to 10 kilos – something that was well deserved after a few days of lying ashore. With such nice weather, it also gave the opportunity to go to some of the tidal currents that fill up with Halibut now in the autumn. So after Cod fishing, Alex steered the boat down there. They timed the fishing with the tide, and it didn’t take more than a few minutes before the first contact was a fact. At a depth of 8 metres, they could spot a 130-140 cm fish that clearly showed an interest in the bait. And when the fish opened its mouth and inhaled the bait, it was followed by a screeching roll.

It went so fast, and the fish went full speed upstream, and the boat drifted 2, 5 knots the other way. Alex considered life too hard, and would pass the rod on to Evald. But after 40-50 meters of pulling out, the fish just jumps off. It was disappointing that the fish disappeared, but everyone had an absolutely incredible experience when they saw the whole process in the clear cold water. Just a few moments later, Evald and spinning fish are standing with a smaller jig. On upswing, he notices that someone is nibbling, but he keeps a cool head and carefully cranks up. And when he sees the jig, he also sees a larger shadow that follows all the way to the surface. The fish stands completely still in the current and looks at the jig, and slowly slides back down to the bottom… This one was not as big as the previous fish, but still a great experience. The hours pass, and there are more fish that lift themselves from the bottom, but they don’t catch… And when the current dies, most people feel satisfied for the day, and decides to go back to the camp and pack the things. Even though it was pole out with the flounder, it was really fun for the old men to see how these fish hunt. It was the end for this group, and we want to thank you for a very pleasant week!

On Wednesday it was just me and Alex at the camp, and the weather was really beautiful. It was simply a golden opportunity for us to take a private tour, so we did. The sun was shining, and the sea was completely flat. With Dire Straits on full blast, we headed for a tidal stream on a crazy fine autumn morning. Once there, the conditions were absolutely impeccable. The current was good, and there was absolutely zero wind. Something we felt was good, but it would prove to make it more difficult. We put the first drift completely inside the grounds, and already in the first drift, Alex’s is on fire. The fish rushes away at a completely wild speed, and Alex can only hang over the grouse and hope for the best. When the fish finally slows down a bit, it loosens… Glosene flew out, but we realized that the fish was moving a bit today.

Operations continued, and we spotted several smaller fish in the shallows that looked at our baits, but changed their minds pretty quickly. And then my thoughts go that maybe the visibility was too good, and the Halibut became shy. For in the evening it would finally turn, and the fishing would start in time with a setting sun. We drifted towards a shallower sandbar, and Alex cast with a spinning rod. When Alex throws almost ashore, it would finally happen. I’m guessing that the Sandeelen was about 4-5 meters deep when a nice Halibut of 113 cm clipped in and offered a fierce fight in very shallow water. We ran the nest on land, so we put a new run a little further away. Alex takes ONE roll, and again it smacks on the Sand eel. Another incredibly fun fight at a depth of 12 meters, and we landed the brother fish at exactly the same length, 113 cm. The sun continued to set, but we only had a few more simple contacts, before we moved in the last half hour into a backwater. We drift on, and I see a fish coming up at 9 meters on the sonar. I couldn’t see the fish, but Alex threw out a jig, and cranked it up very quickly from the bottom, and got an immediate reaction. The fish missed the jig, and Alex thought it was the hook when he saw it and jerked. The fish clicks completely when the jig flies up quickly, and cuts the jig immediately when it is on its way down, and Alex put in a clean counter strike, followed by a fun rush straight. After a few minutes we landed a nice Halibut of 92 cm. And with that we packed our things and headed home after an eventful day of fishing.

On Friday, Alex’s friends were there, and they were, to put it mildly, eager to try Halibut fishing after what I and Alex had experienced. So the course was set towards the same area with completely impeccable Forhold. The day was to be split between Halibut and Cod, and it was a fairly quick reckoning on the Halibut front. After only a few minutes of fishing, Felix hooks a bigger fish on the spinning rod. And as a first-timer, it was really full fire in the boat when the spinning reel howled. After fighting the fish for quite a while, Alex was able to secure a fantastic first fish for Felix of 127 cm! And not long after, Casper hooks a nice fish around 90 cm on a spinning rod. I myself was down for a trip and had a fun day, and hooked a nice 122cm fish on the perch gear! 5-20 gram rods are not recommended, but it was a really sick fight that I don’t want to forget… When you see such a big fish come up to the boat and cut the jig, all the plugs are tennes. Action continued in Alex’s boat, but the fish were difficult to deal with. When Felix casts out, it follows one of many fish this day, but this one was bigger. Alex estimated the fish to be around 140-150 cm.

Someone who wanted to offer a completely extreme fight inside 10 meters deep. Unfortunately, the fish didn’t want to take properly, and it cruised down to the bottom again.. I myself had a fun experience with the perch rod again, where a 90 cm fish came up to the boat and followed the seine that was cranked up and took it. Unfortunately the fish was not hooked, but I threw out the small sand part with the perch rod, let it sink to the bottom, took 2 cranks and SMACK, same fish! But to put it mildly, your harvest fishing is hot now, and it is very sad that the season is over when the fishing is so good. But Alex and the guys ended it all with a nice Cod fishing on the way back to the camp, with nice top fish around 10 kilos. And it was the last fishing session for this season…

The season is over, and it’s always sad to take up the boats and pack up the things. It has been a very nice season, with many incredible top fish and cool experiences! Now we are working on the last boats, and closing down the camp for good. I and Alex would like to thank all our guests for an incredibly nice season. Without you it wouldn’t be the same! So thank you again, and we look forward to sharing new fishing experiences with you again next year!