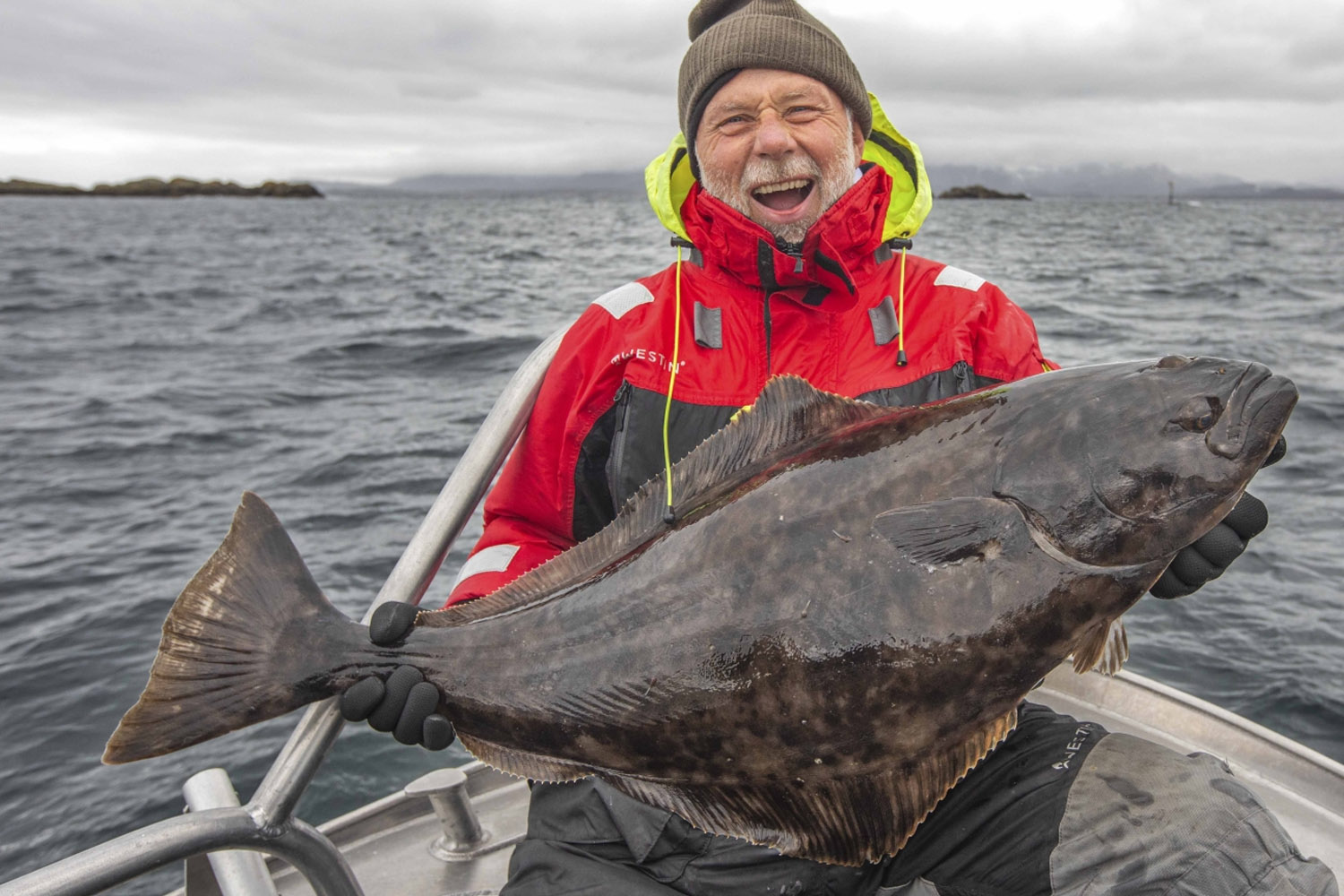 The weather forecast in Vesteralen has hardly been cheerful at the start for this week’s guests. We took the chance on Wednesday night to go out on the open sea, a decision that turned out to be just right. 4 boats set course for the peaks and were rewarded with plenty of Cod around 10-11 kg.

Just in time for us to be in port in the evening, the wind started to whip hard and has kept its grip around Vesterålen with an iron fist. Wind gusts over 20 m / s with heavy rain have made it difficult for the guests to fish until a gap in the wind suddenly appeared on Friday morning. The wind stopped and we took the chance to go out.

The immediate area outside the camp offers many exciting places with fine sandy bottoms, and there we put our boat in a drift in the hunt for Halibut. We started in a safe place where we have caught Halibut many times before and already in the first drift over a light sand spot it sucked on Fredrik’s Crazy Daisy in our own special colour “Pink Panther”. The sonar showed 8.8 meters, and the Halibut pulled sideways over the ground. Two of our lines immediately tangled together but we released the tangle quickly and were able to continue the fight. Fredrik was able to continue the tough drilling in shallow water that was far from over, but managed to parry both the intense head shakes and runs.

After a while we landed the fish, which, after measurement was 135 cm, what a great start to the day! Daniel’s boat reports shortly afterwards a lost Halibut on the same spot, so we put a new drift. The bite period is on and it does not take long before Fredrik signals that another Halibut has sucked in the jig. Again rod bending and rushing, this time with 10 meters under the keel and the scenario repeats itself, although this Halibut was slightly smaller. Quite quickly we land the fish and measure the Halibut to 108 cm. We do not have time to change drifts before Daniel’s boat had a double hook-up where both Halibut, unfortunately, emerged victorious from the battle.

The next hour is calm and we change area, closer to the camp where we saw some interesting gutters between some islands on the plotter. Once in place, the sonar indicates a clean sandy bottom and we also see shoals of Sandeel. Already in the first drift, everything felt completely right and we were quickly rewarded. Janne, who fished from Daniel’s boat landed a Halibut of 95 cm in the first drift and later in the same drift Johan hooks into a very strong fish. Daniel follows with the boat to keep the fish away from the snags while Johan keeps pressure. The fish is refusing to give up and battles on. Daniel helps Johan to turn up the brake further and the Halibut gives in after a while. The fish is secured and also measured to 135 cm.
My boat (Erik), which drifted in the same area, wears on and has within half an hour, two more contacts which unfortunately do not sit on the hooks before both Martin and Dennis hook up at the same time within a second. Martin’s fish shakes loose while Dennis stays with the rod bent down in the handle. The fish is very alert and rushes under the boat. In the strong village wind that has started to build up again, it is difficult to stop, but we are able to land the fish after a while which measured 112 cm.

We call the other boats at the camp on the radio to inform them about the contact we have had so far. The jigs are superior at the moment and the best is clearly the curly tail jigs, both in the 300g and 400g model. Two really big fish win the battle with a line break as a result, nasty, but in shallow water, there are small margins between success and failure. In Håkon’s boat, a rod suddenly bows, and we hear Camilla’s joy over the sea. The fish pulls as well as the others but gets defeated after some teamwork in the boat. You can feel how happy Camilla is over her Halibut of 120 cm when I slide it up to the boat side for some quick pictures.

Now the wind is starting to increase more and more and we decide on one last drift before returning home. We try another new place that we have never fished before and within 40 meters we hear Martin roar. He has cranked up the jig to the boat side to let it down again, and just as the jig approached the water surface a large shadow could be seen below. Despite the adrenaline rush, he has the presence of mind to drop the jig to the bottom and the flounder that was really on the hunt sets full speed down and sucks in the jig after only a few meters. The line slackens and Martin pulls in a counterattack like no other. The Halibut responds with a brutal rush in the narrow gutter and Martin lies his weight against the railing and holds on tight. The swell wells up and the wind quickly pushes us towards deeper water. The rain is slowing down but no one notices the pouring rain in the heat of battle. The Halibut offers several heavy rushes but can eventually be landed. Due to the swell, we choose to lift the fish into the boat, but to our great surprise, it was larger than we thought and measures the fish, which was in excellent condition at 136 cm. Some quick pictures before the fish can swim home and we set course straight for the harbor with the flag at the top.

The rain continues to beat but no one seems to care. The joy in the gang was high and no wonder with such a fantastic Halibut session that we had.

Despite terrible weather forecasts, it was still possible to fish effectively in protection from waves and wind within a short distance from the camp and we found, during the day, lots of new fishing spots where it housed large amounts of Halibut. An area that we are guaranteed to try spin fishing, given the amount of sandeel that lived there. We make a new attempt as soon as it gives the opportunity to go out to sea again…