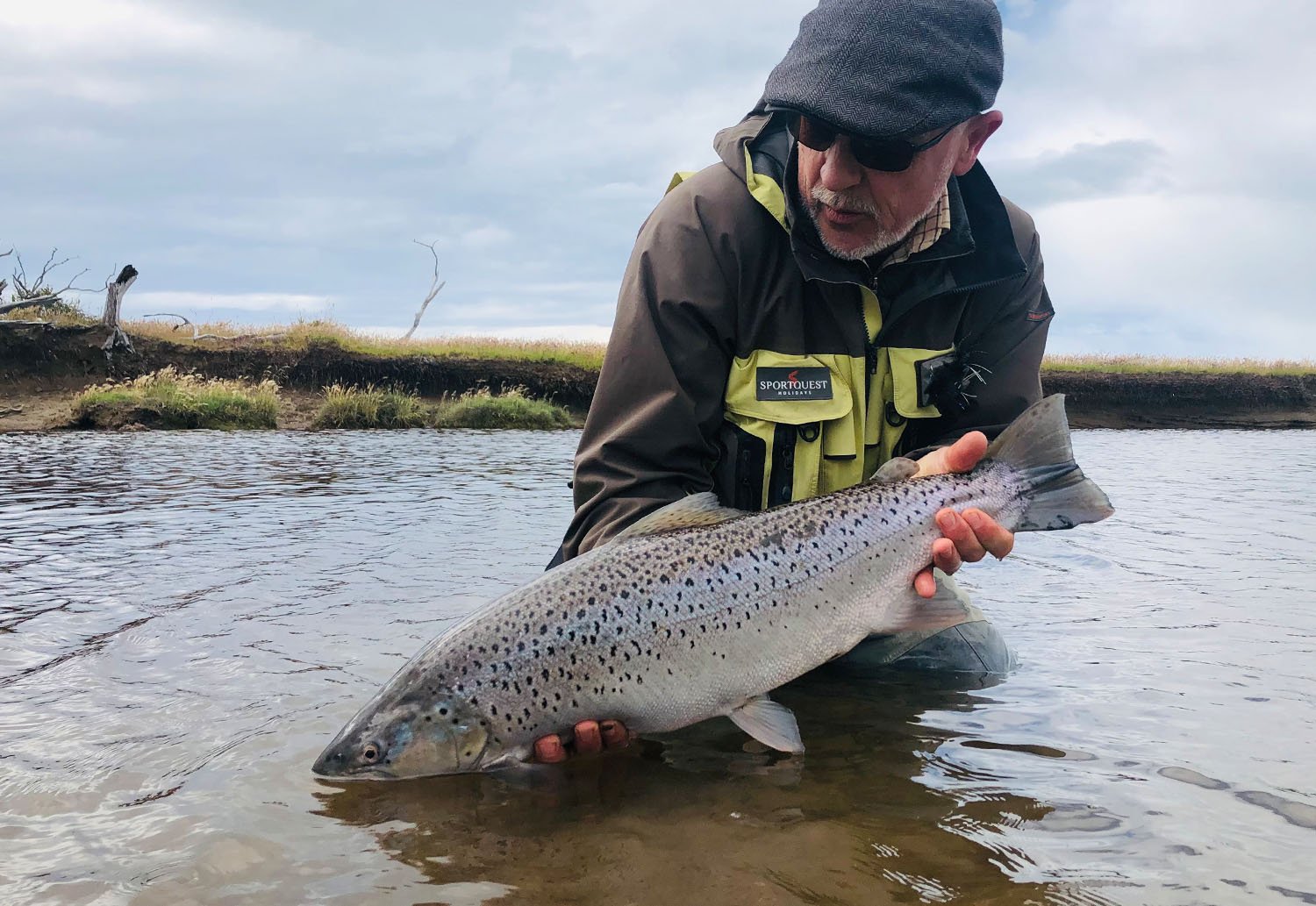 After what has seemed to be the longest wait in the world due to Covid restrictions, it was finally time to travel back to Argentina, and the first stop was the hosted week at Worlds End Lodge. To say that everyone was excited was an understatement. After a seamless check-in, we were all soon sitting at the bar in terminal 5, excitedly talking about our last visit two years before.

The team was Peter, Andy, Philip, Tracey and me, precisely the same group as the previous year. Arriving in BA and clearing customers was more straightforward than very hassle-free. Our welcoming ground handlers met and greeted us before transferring us to our overnight hotel.

After a good night’s rest, they were there again to escort us to the internal airport for the onward connecting flight to Ushuaia. Although long, the drive from Ushuaia to the lodge is always a welcoming one, the scenery as you wind up and down the roads over the mountains with the treelined slopes littered with rivers and waterfalls is a delight.

On arrival to the lodge, all the staff, some familiar friends and new ones are there to welcome you in for the week; each person has their single en-suite room, so plenty of space for all your luggage and your own space to relax.

As we had 5 rods, including me, we had both Andreas, who had guided the river for many years, along with a new female guide called Marcela, who was such an excellent guide and one who had quickly fallen in love with the river. Then the lodge manager Diego was also guiding. This meant each day we could all swap around, so we all got to spend some fishing sessions together, plus that everyone would get a whole day one on one guiding with Diego, the river master.

Like many in Argentina, the river was a little on the low side, but as it’s the only lodge on the entire river, there are always many pools to fish. As usual, on the first day, everyone returned to the lodge having caught Sea Trout, and this year, the average size of fish seemed to be even bigger. So you could not have wished for a better start to the trip. Diego took Peter to the sister river Rio Malenguena that, on day two, joined the Irigoyen right beside the ocean while the rest of us concentrated on the main river. On returning at lunchtime, Peter had a massive grin on his face as we asked how was his morning; he replied he had landed 5 Sea trout. As everyone else had also had a good morning, you could say the trip was off to a flying start in typical Worlds End fashion.

On day three, it was Tracey’s turn to fish with Deigo, and with great results from the previous day, it was no surprise that Deigo opted to take Tracey to the Rio Malenguena. Just getting to this river is an adventure in its own right. First, you go by the Argocat and cross the Irgoyen river as it joins the ocean, then a few miles up the beach before you reach the main areas of the river. Again we all returned back to the lodge at lunchtime after the morning session, and yet again, Tracey’s face told the story even before we had the chance to ask. She had a fantastic morning landing 4 fish 3 of which were over 10lb, and losing a couple as well. Plus on top of that, she also landed her biggest Sea Trout to date, a stunning 17lb fish. What a fantastic morning, considering that it was unusual for this part of Argentina a very windy morning. However, Tracey paid the price with a fly going deep into her hand well past the barb. Mind you, she was so high on adrenaline she never felt a thing as Deigo expertly removed it.

After lunch Peter, Andy and I decided to give C-pool a fish during the siesta period. Also, the lodge wanted a couple of Robalo to cook one evening, so I was given the task of getting a couple for the table. What a fun session this turned out to be and one Peter will remember for a long time. Peter was fishing between both myself and Andy. Andy was fishing the mouth of the Rio Malenguena, where it joins the Irigoyen River concentrating on trying to catch the Sea Trout rolling out in front. I was a bit further into C-pool targeting the Robalo and catching one after the other I must of caught over 20 fish, and Peter had not had a touch. However, there’s lots of banter and laughter as Peter just could not touch a fish while I was catching consistently, and Andy, to his other side, although trying for the Sea Trout, was still catching the odd Robalo. Finally, seeing that Peter could not take any more pain and as I had enough of catching the Robalo, I said to Peter move down to where I am fishing, and I will walk up to above Andy as I fancied giving the Sea trout a try. Now, as we were wading waist-deep in the water, I decided not to reel everything in, just strip the line back and tow my line behind me as I walked behind Peter. Yes, you have already guessed it a Robalo only grabbed my fly directly behind Peter as I walked past. To everyone’s amusement, the guides were crying. I was crying, and so was Peter; you just could not have scripted it if you tried. We all returned to the lodge for some refreshment before the evening session.

After a quick rest, we all returned back to the river for the evening session. However, as we went to the upper Zones, we quickly realised the river was rising fast, at first a little bit of debris, a bit of weed and then soon the river colour was too much to carry on fishing. Mind you, before we all had to stop, that did not stop Peter winkling one out, and for Tracey, who was on fire, she only took 2 casts to take another 14LB fish to make her total for the day 5 fish. You know when a trip is going well when you all sit down, and people are unsure how many fish they have caught, what the sizes were and where they caught the fish. For when it’s all going so well, it all becomes a blur.

Day four, as the main river was too dirty to fish, it was decided that everyone would go and fish the Rio Malenguena. Which is another real benefit of fishing at World End Lodge, for if the river blows out, you can still fish its sister river as it has a different catchment area, so they very rarely blow out at the same time. This was a mission in its own right as we needed to ferry five anglers and three guides on Argiocat, it was soon done in two shifts, and it was not long before everyone was up and fishing. As it was a fair distance to travel, plus we needed to wait until the tide was right so we could all cross the river, plus then wait again for the low tide so we could all return. Therefore it was a different day where we all took a packed lunch and drinks with us to stay out for the one long session. What a day this turned out to be the number of fish caught and lost was amazing; it seemed every 10 mins, someone was either landing or losing a fish. Again the laughter and atmosphere were electric as everyone was just having so much fun.

Days five and six were all spent back on the main river as fortunately it only took one day for the river to return to a suitable colour to fish. Again everyone was catching fish each day, not as many as the start of the week, but good numbers all the same and with some stunning fish well over the 10lb mark. On the last day again at siesta time, I decided to give C-pool another try this time; I was all on my own apart from some of the lodge staff who had chosen to have a little fish in their rest period. Again I was straight into the Robalo, which is great fun, and some go over 10lb, so very hard fighting. Again as you are fishing waist-deep, it’s too much to keep wading back to shore to land fish; therefore, you would play the fish until you could grab the leader and then handline the fish to you before holding upside down, unhooking and releasing. I was busy playing a fish that was fighting extremely hard and just would not give up; I was holding on to the leader trying to handline the fish in that last bit when eventually it broke the surface. At this point, I let go of the leader and started to play the fish back on the rod and reel again, for as it rolled, it showed a pleasant silver flank. It was an excellent Sea trout, and I had been trying to bully it in. This fish was worth the wade back to shore to beach the fish, which went around 14 lb, so a nice lunchtime bonus.

In the end, the group ended up with 61 fish on the bank with 85% of the fish being over 10lbs, and many also lost, so another excellent week for just 5 rods.

As usual, everyone at Worlds End Lodge took great care of everyone. The food is just to die for. Maria and Johnny’s cooking and hospitality are second to none. The food is not just lodge quality it’s five-star restaurant quality, as you can see from some of the pictures.

All in all, another great hosted week was an absolute pleasure to be a part of. A huge thank you to Andy, Peter, Phil and Tracey for such a great week and to Deigo and all his team.

We are already fully booked for three hosted weeks in 2022, but we do have some spaces available on non hosted weeks if you would like to experience Worlds End for yourself.

If you’ve always dreamt of fishing for some monster Sea Trout, then the famous Worlds End Lodge on the Irigoyen River would be perfect for you. If you’d like to know all the information about the fishing and accommodation, you can contact me directly on 01603 407 596 or email me at peter@sportquestholidays.com.