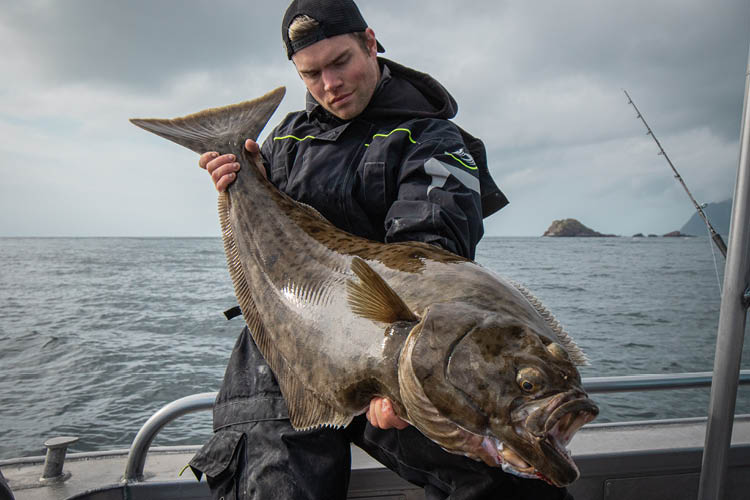 Nothing is better than a week of big Halibut, amazing fishing and stunning weather out in Nappstraumen! The Halibut must have been super hungry this week!

Last week we were visited by three groups with a lovely group from the east. Some of the guests had been here before, but others were brand new to our camp at Nappstraumen. There were reports of good weather most of the week, and our guests were buzzing when they arrived at our camp on Thursday night.

The fishing was a bit slow the first two days, but there were some nice fish in the 8-10 kg class. We struggled during some longer trips, and at times had good fishing, but fishing is fishing. It’s not always easy! But on day 3, we took the trip a little further north when the fishing finally loosened, there were several nice fish onboard the boats; both Coalfish, Cod and Halibut. An anglerfish was also caught during the week by Knut Åge, weighing around 7-8kg. A very pretty and unusual fish! We also had good action on Halibut that day! Morgan quickly got his very first Halibut just below the minimum size! Not long after, Kjell went on with a couple of nice Halibut of around 85-90 cm. Harald later also got a Halibut immediately below the minimum size, the boys also caught several nice Cod this day!

One of the perhaps most incredible experiences during this week was what happened to our guest Robin. It struck his rod when it was in the rod holder, but he lost the fish after only a few seconds. It takes about 20 minutes into the same drift as before, and then it slams back into Robin’s rod. Finally, after a long and hard fight, a Halibut of 155cm comes up !! It turns out to be the same fish he had lost 20 minutes ago when the tackle is in its mouth. What are the odds of that? Anyway, congratulations on a hefty catch!

On Saturday, we finally had some time to fish a little privately, so me and my colleague Jørgen then went to our camp, which is located on Å, to see if we could catch some Halibut. We then took the trip out around 07:00 in the morning to reach the tide. When we arrive at the first place we had decided to fish, it took no longer than 10 minutes before the first Halibut bit! I landed a nice Halibut of 108 cm after only a few minutes. After that, not many minutes later we were in again! Jørgen unfortunately lost the fish after a long battle. There were probably no giant fish, but it would turn out to offer several barn doors on the bottom. It was an incredibly nice day at sea, even though there was some wind from the beginning. But eventually, the wind calmed down and the sun peeked out. We got several Halibut in the 110 cm class and tested some areas that had not been fished the week before. It really seems like fish are good in most places! After the day at sea, we had caught several nice Halibut, and been in contact but many more who would not stay on… but it is part of the game.

During this week, a number of fine fish came up, such as Coalfish, Cod, Halibut, Anglerfish and Catfish. A bit of a rough start to the week with a bit of slow fishing, but that’s just the way it is, and that’s probably one of the things that makes fishing so fun to do, you never know what’s going on before you go out! Thank you so much for a great week guys! Hope to see you again!