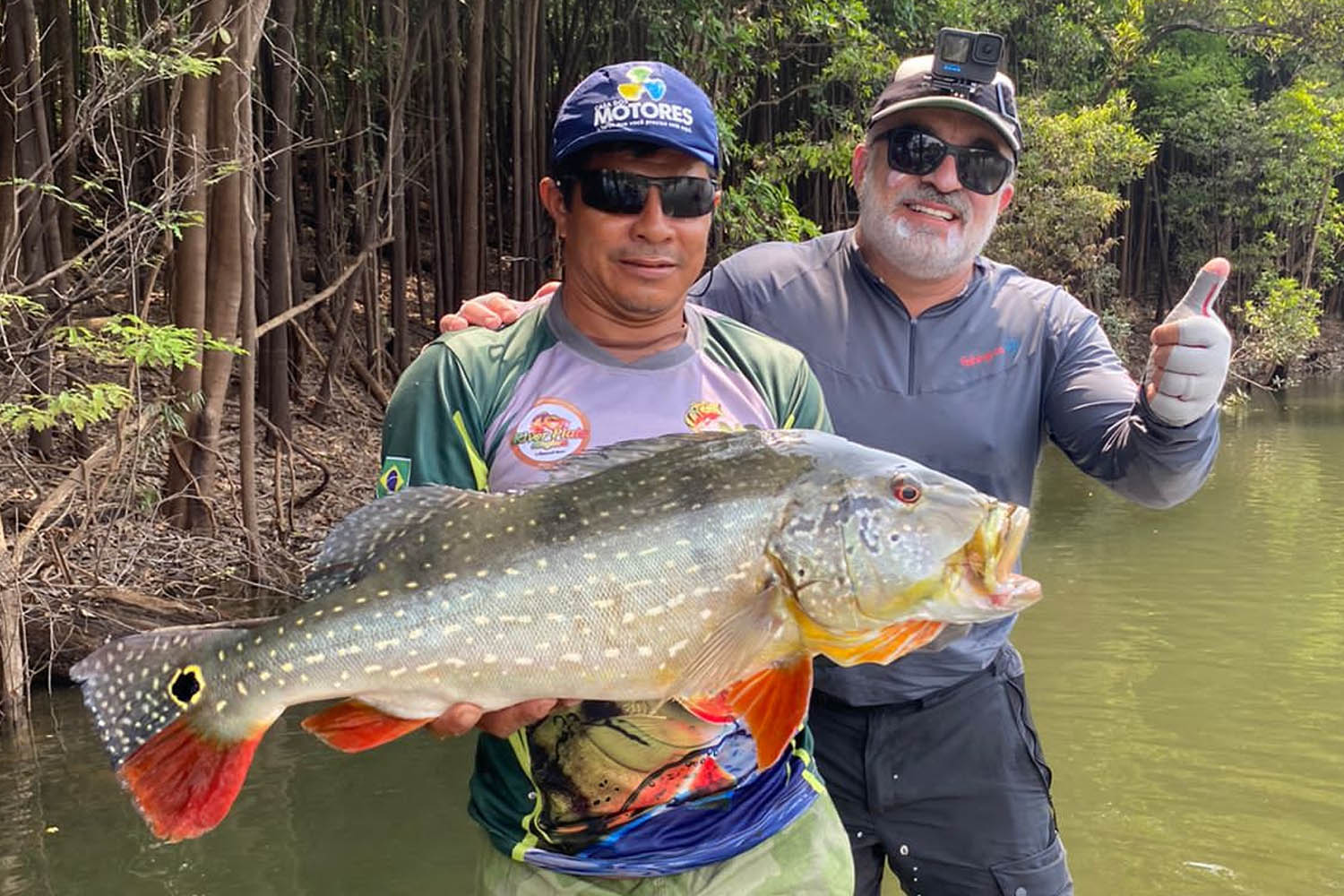 The big story this week was landing 61 trophy peacocks by two parties of 8 anglers, on the Upper Uneuixi River at our exclusive fishery on the Roçado indigenous community.
That is an average of 1.3 fish per boat per day. That’s a whole lot of trophies! The two groups were led by repeating guests P. Douglas and N. Denis. All of the above trophies measured over 80 cm.

The total for the week was 2844 peacocks caught by 35 anglers, divided in 5 parties/River Trains. See the fish tally below, which excludes a wide array of other less aggressive tropical species such as the matrinchã, Jacundá, Apapá, Wolfish, Pacú, Bicúda, Red Tail Catfish and piranha.

Since we broke waters two weeks ago, we are much below our sustainable capacity, hence, the effective lures for bait casters continue to be large (6 inch) noisy top waters props, of any color. For fly fishermen we continue to suggest sinking tippets and long mickey fin streamers for trophies, and poppers for smaller fish.

Expected water levels across our 10 Private Rivers spread out across 4 Dry Zones are very predictable, taking into account La Niña official forecasted rainfall changes.
In the North West Dry Zone (see map below) on the upper Uneuixi River (Roçado) water levels rose slightly, but started to descend to a very fishable level towards the end of the week.

On the North East Dry Zone there are similar water level fluctuations as mentioned above. Our guests are having good angling on the Omero Lakes, and greater angling on the upper Jufaris, as waters here are dropping a bit faster.
On the South West Dry Zone water levels are perfect, but we will be moving 700 miles north next week since we have reached our 5-week sustainable fishing capacity. It is very important not to overfish since peacocks are territorial during their breeding cycle.

We base our predictions on today’s water levels along with the 10-Day Rainfall Forecast (accumulated inches). These forecasts are for the towns listed below in red which affect the zones mentioned. A 10-Day Forecast for more than 2 inches of rain means water levels may rise; under 2 inches means that water levels may drop.

Since the rainfall forecasts in our monitored towns in the North West Zone are over 2 inches, we would expect water levels in the area to rise; however, since there is little rainfall forecasted over the towns of Barcelos and Novo Airao on the Negro River, which have also seen very LOW rainfall over the last 3 weeks, it might drain the smaller tributaries in the North West Zone (Jufaris) and the North East Dry Zone (Uneuixi).

The 10-Day Forecasts for the towns in the North West Zone are as follows:

10-Day Forecasts for the towns in the North East Zone are as follows:

10-Day Forecasts for the towns in the South West Zone are as follows:

Our water-level predications are not just based on immediate rainfall forecasts but also on longer term (3-month) forecasts for unusual (or what is called anomalous) rainfall across all of our fishing zones. In the above illustration, no unusual rainfall is expected in the white areas for the next 3 months. Note that the North West Zone is in light blue, meaning that it is expected to receive more rainfall than normal for this time of the year.

In contrast, the South West Zone is almost completely in white, meaning that it should receive the usual rainfall for this time of the year, which could be our FALL BACK to optimize good fishing during January and February in case our private fisheries in the North West Zone such as the Upper Itapara, Upper Xeurini and Upper Jufaris are below the expected good water levels for that time of the year.

If you would like to find out more information about our stunning Amazon river basin destination and how you can join in on the action and fish it for yourself, make sure to take a closer look at our tour page. If you have any questions regarding this tour, you can contact our freshwater fly fishing team on 01603 407596 or by emailing them at info@sportquestholidays.com and one of the team will help you with your query.