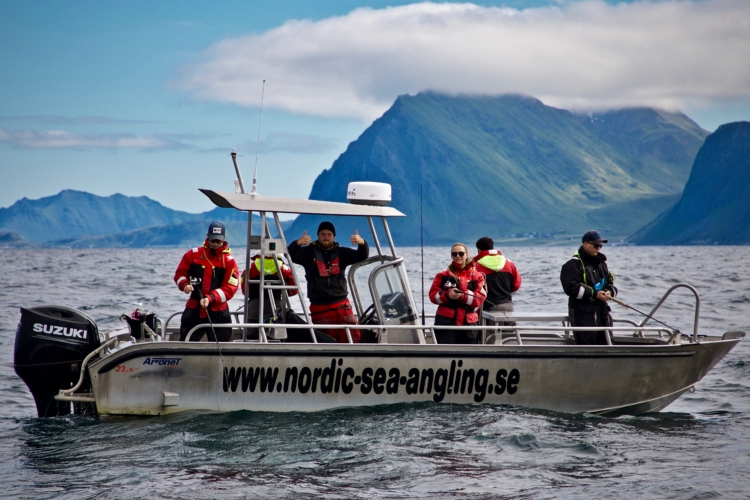 What a week at the fantastic camp Nappstraumen in Northern Norway! It’s always great to see the guests landing some great fish, especially when a guide also lands his new PB!

The past week has offered both sunshine and quiet days at first, but it has gone to worse weather with tough conditions over time! Our Dutch group of 4 people have enjoyed it with some really good results in the form of both Coalfish and excellent Cod. Calle, who guided them earlier this week, tells in port about an excellent cod fishing spot where it literally prouced Cod on Cod as soon as you dropped the baits to the bottom. Several nice fish were landed between a couple of kilos up to around ten kilos. Calle also took them on a little targeted Halibut fishing trip. After a couple of contacts, our Dutch guests could finally be proud of their first Halibut ever in Norway!

During the week we also had a bunch of day trips of around 4 hours, and since it is close to the marks, the fishing time could be made more efficient in the best possible way. On the Day Trips, Cod, Coalfish, Ling and Halibut have appeared in an area just 15-20 minutes from the camp! An area that is clearly really fun as it is not far between the cuts.

I (Daniel Freland) was also out on a solo session at the beginning of the week, and I can promise that there was chaos in the boat! After stopping at a mark and catching some baitfish, I went to the area where I was going to fish for a few hours. Once in place, the conditions were perfect and I drifted about 1 knot with the line straight down under the boat, after about an hour of fishing, I put on the slightly larger bait fish and I only have time to realize that it is a large fish ive hooked into, before out of the corner of his eye could see a fish on the other rod! I put the rod with the fish I hooked in the rod holder and then go and counterattack other rods, unfortunately I lost the fight on that fish but with the result in hand it was probably just luck when the Halibut I already hooked pulls away in a hell of a rush and holds literally on emptying the spool on the reel. After a couple of minutes of boat driving, I finally got the line straight down under the boat and was able to put pressure on the fish for the first time, a little while later the fish’s head finally starts to lift from the bottom and the fight was on for real. I saw on the plumb line that there were about 15 meters left before the fish was at the surface and I can promise that the nervousness and adrenaline was at its maximum! The fish comes up to the surface and I was able to secure it on the first try with the halibut hook (not quite easy when you are alone in the boat), After the fish was secured at the boat edge, I waved in a couple of Germans who were a stone’s throw away and asked them to help me with documentation and measurement of the fish. I could now finally jump in the water and be proud of my new personal best on flounder that measured 185cm, happiness was an understatment!

Last Saturday, we had a day tour with a larger group of ten people, and Calle and I divided the guests between two boats and set course for an area where our boss Jimmy and his family had really good fishing the day before. Once in place, the fishing started really well, the wind hailed from left to right in the boats, and the guests’ smiles were full of fishing happiness! After a while it became a really fun competition between both my boat and Calle’s boat where it was about which boat managed to pick up the biggest fish for the day, But I do not really think our guests managed to decide which had the biggest fish in the boat so we agreed that it was a draw, but what does it matter when there is a constant rod bend in the boats!

Now the weather is really poor and we can only hope that it turns around and that our new groups of guests who arrive on Wednesday can be met by a Lofoten with radiant sunshine and light winds!