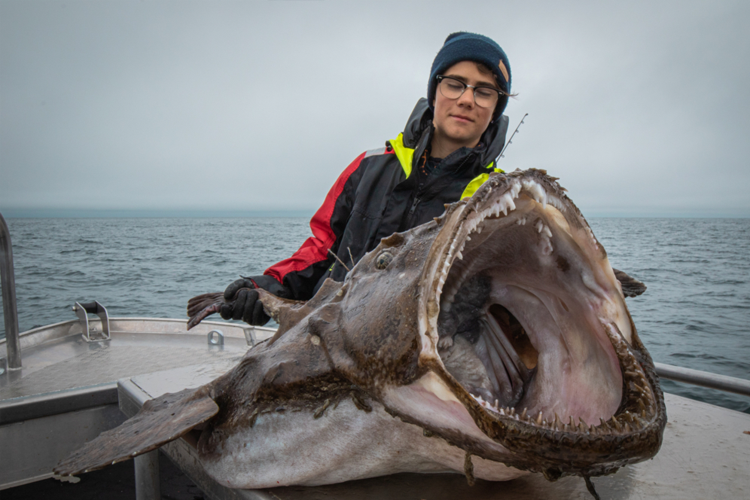 Vesterålen is keeping up with the streak of being absolutely on fire at the moment when it comes to the fishing! This week even saw a new camp record Monkfish being landed!

Another week is over here in Vesterålen, and we have finally had some luck with the weather this week. Our own Guide, Håkon, is still somewhat in shock after his wild catch on the long trip last week (you can read about this here). In addition to this giant madam of 240 cm, there have been several very nice catches in Vesterålen. Among other things, a new camp record on Marulk! And there was a new NSA record as well…

Thursday last week should prove to be one of the better days this week. It was set for a long trip already the first day! Håkon steered the Guide boat, and took boats 3 and 5 out on a long trip. Me and the Dutch in boat 1 were to drive north to fish for big Pollack on the many peaks up there. On the long trip it was an ever so nice fishing for long! The vast majority aimed for coarser Cod, as we had an insane fishing for large Cod the week before. There was no real action on the Cod, but most boats got a couple of Cod up to 15 kilos. But what is really unique out there is the longline fishing. And here it did not take long before all the boats had 4-strokes on large Lings. Every single boat landed several nice Ling that crawled just over the 20 kilo mark! Everyone was super happy and it was really a good start to this week. At the same time, I lay closer to the camp and fished for pike with the guests from Holland. Here we had an extreme fishing for Pollack, with incredibly light equipment! We got several specimens that went over the meter mark, and we guess that the largest we landed were about 7-8 kilos. It’s not exactly boring to pull these powerful predators on 10-30 gram rods. The Dutch really got a taste of this fishing, and we continued all day, and had an insane amount of fishing on these fish. Occasionally we also caught very strong rock Cod up to 8 kilos on the same equipment. It’s really cool, and do not hesitate to bring a light reel / multi-rod for this fishing if you visit Vesterålen. There are endless possibilities.

The next day was again tough weather, and we really struggled to catch anything. We left several drifts for Halibut in the immediate area, but it seemed completely hopeless at times. We got some ok Cod, but that was it. On the other hand, it was a bit calmer in the fjord, so we put a couple of drifts on Redfish together by boat 5. There were some nice specimens up to 2-3 kilos before we decided to give up. It was simply too tough when the wind blew 10 seconds. It was better to wait until tomorrow’s good weather… Worth mentioning is that Uerfisket is “closed” for this year. It is therefore not allowed to target for Redfish after 1 September, so we can unfortunately not offer this fishing for Redfish from today…

Then came Saturday. Now the wind let down completely. Despite old swells, the weather was absolutely top notch, and Håkon took boat 5 on a long trip again. The goal was big Cod this time. And there were some nice Cod of 10-15 kilos in both boats, but Håkon’s 240 cm Halibut is probably what is most memorable for most people this trip. You can read more about this in a separate news item. But Halibut could not be landed that day. Magnus in boat 5 also hooked in a nice Halibut, which bent on a solid fight. Håkon jumped into the boat and landed the fish for Magnus, and it measured to a nice 129 cm! Since it was a bit tough with the Cod, the boats left again after the longs. And it could not have taken more than 1 minute from the descent, until boat 5 stood with a 4-stroke on large Lings. Oliver, 14 years old, went in the Guide boat, a terribly nice Ling of 21 kilos! The fishing continued in the same class, but it was time to go back for a monster Halibut, and several other nice fish this day… The long trip continues to deliver, and there are guaranteed to be more such giants out there. I’m crossing my fingers that we can get out there again this week.

On Sunday, luckily it should also be nice. The guys at the camp were happy with the long trips, so we had to drive a bit north with all the boats to look for a little bigger Cod. Here we started fishing on a peak we have never fished before. And Oliver in the Guide boat was not afraid to throw down his saithe first. I prepare my own Coalfish, when Oliver says he is stuck in the bottom. We pushed down the edge at the top, so I thought it was very strange that he was already stuck. So I grabbed the rod, and felt for. It was very heavy, but it came up slowly. Big Halibut I thought. Then I cleared the Halibut hook, and looked excitedly into the water, for it came up slowly but surely. I could see the contours of something big, but it did not look much like a Halibut. It was a giant mouth that came up tellingly, and I only realized when it was a giant Monkfish! I pull myself around after the chopping hook, and get to put it in the upper jaw and get the beast lifted in. It was completely euphoric in the boat, and none of us had imagined pulling such a beast into the boat! We took some quick pictures of the fish and tried to weigh it. In the boat we had a weight, but it only went up to 27 kilos. This one went to the bottom. So we felt happy to weigh it ashore!

We continued fishing, and found a deep edge that housed extreme amounts of fish. Here we all fished only with bait, and Jakob was the first to pull up a coarser Cod for the day, which we estimated to weigh around 15 kilos. Shortly after, Oliver caught another fish in the 10-12 kilo class. There were no quantities of large Cod, but we had contact with several fines of that size, and got more around 7-8 kilos. The drift later I had contact with a Halibut, which had swallowed a 2 kilo Haddock that had managed to get the circle hook into the gills. So it was completely impossible to hook the fish, but the Haddock did not look after this contact. So we realized that there was Halibut here too, and only minutes later Oliver caught a nice food fish which unfortunately came loose at the boat edge after a fun fight .. A little post out, but Marulken saved his day anyway. After this race, we put all our cards on Halibut on shallower water. Unfortunately, the Halibut was missing, apart from a couple of contacts. We went home, and were excited about the weight of this beast .. On land, the Monkfish can be dragged up with us, and weighs a full 28 kilos! Only 1.3 kilos away from the NSA record, and a new camp record in Vesterålen!

The next day did not look bright, and a couple of boats fought their way into the fjord inlet without much result. The weather was tough, and the wind blew into the fjord for about 10 seconds. But everyone was still happy after some fantastic fishing days outside Vesterålen. The Scanians also got a small Monkfish right by the camp of around 3-4 kilos, which they released nicely again. But now the stage is set for a new week in Vesterålen. It looks very tough with the weather, it must be said. Saturday seems like our best hope to get out west, but that can always change. We cross our fingers that we can have a long trip, and several days west…

We do still have the odd week available for the 2021 season at Vesterålen. If you would like to join us at the famous Northern Norway destination call us on 01603 407596 or email us info@sportquestholidays.com.