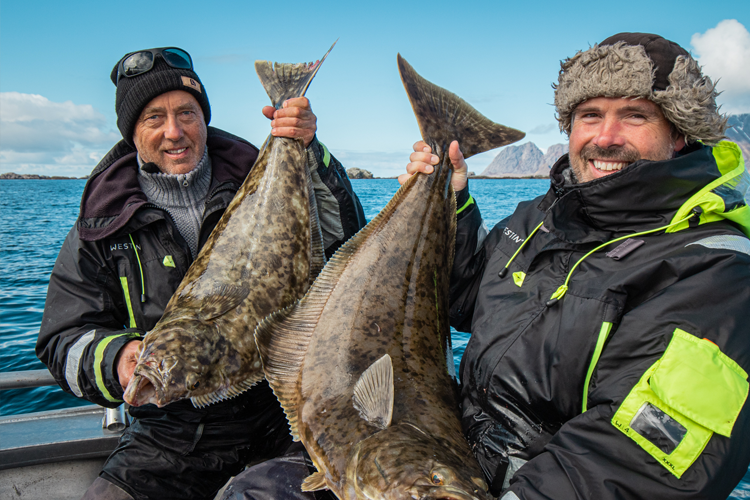 Another great week with some phenominal captures, everyday we miss fishing Norway even more! We cant wait to get back, just leave some fish for us! You’ll find the week on the water below, ill pass you to the guides for their words.

Last Saturday, as I said, Magnus was at the camp for an 8-hour trip after Halibut in Nappstraumen. We went out for lunch and fished throughout the evening. The day started tough, and only a few contacts were all after 6-7 hours of fishing in the area. The wind was blowing well from the northwest, so it wasn’t easy to drive out on the north side. But when the water started to turn, we were met with several contacts with nice fish in just a few minutes. Unfortunately, there were no solid fish – yet. We drove across the strait and let ourselves drift at a depth of 15 meters. It seemed pretty quiet in current, but then it went on. We drifted over a small tongue that made a nice backwater, and then it slams for Magnus on the jig! The Halibut sets off under the boat on the shallow water, and it all becomes an insanely fun fight! After three trips down into the depths, we secure the fish and measure it to 119 cm! New personal best on Magnus. We add a drift over the same spot, and there it slams me again! Another fish of the same caliber, but only 4 cm smaller than the first fish. It turned out to be a fantastic day anyway! On the other hand, the sour thing was that when I was about to transfer the pictures to the PC, the card was broken, and the ieeeemages are unfortunately gone, But Magnus probably lives well with those memories anyway! Thanks for a nice trip Magnus!

On Thursday, my dad and his friends arrived at Leknes airport, where I picked them up and took them to the camp. Even though they were tired and weary, we drove out for a quick trip in Nappstraumen after the Halibut. It was only a short trip, but Leif was the first to feel the power of the strong fish. Unfortunately, we lost the fish in the middle of a fantastic outing. We had several contacts and climbs on the short evening trip, but unfortunately, there was no solid fish this time.

On Friday, the wind had picked up a lot, and we drove north to fish for Cod on the outer peaks out here. We started the search, and it took a few tries before we found the right shoal. On a 15-meter base peak, the small Coalfish were pressed up, and you could see larger echoes under the main fish down there. So we lay on top, and drifted down. It was almost as if you did not get down to the bottom until it slammed into all the rods at once. It was Cod! And in large quantities! Now the boys pulled up Cod after Cod, which always weighed bigger than the previous. There was a lot of nice fish of 5-10 kilos. After a few hours, the power died, and so did the fishing. We drove on and took off. After looking at several peaks in the area, we found another spot that held up well with small Coalfish. And again, there was of course Cod under them. Here the average size seemed larger, and we kept landing fish after fish. We gave up with long and tired arms after a good session, went ashore, and ate fresh Cod in the fisherman’s cabin.

The next day we decided to split the day in two; Cod in the morning and Halibut in the evening. We went out after a good breakfast to look up the Cod again. And we found them again pretty quickly. Even this day there was just as much action, and there was a lot of fish between 5-10 kilos, but an awesome top fish for Thorgeir at 14 kilos! There were also a good number of large Coalfish hunting in the open water in the area, so we also got some of these up to 9-10 kilos. We left after a few hours when the weather was quite sour, and we were happy with the Cod fishing this time. We went ashore to eat some food, then went out again at 6 o’clock to time the Halibut fishing toward the current with rising tides. We had taken care of some small Coalfish and drove only a few minutes out, leaving the first operation. Even then, I had contact with the first fish, but unfortunately, it spat out the Coalie before I had time to crank in the circle hook. The operation continued without much action. But then. We drifted on the same stretch again. Only a couple of minutes into the drift, I see the side view that Sverre jerks several times in the bar. “I’m at the bottom,” he says. I see on the pole that it is starting to move, and shout that “that is not the bottom”. Sverre had hooked his very first Halibut. We were probably not completely convinced that this was a Halibut right away, as there was never any dives and it all felt heavy. But down in the dark, I saw the Halibut, and got it landed right away. Sverre’s very first Halibut! His grin went from ear to ear, and the cheers in the boat were loose. We measured Sverre’s Halibut to 100 cm. Little happened after this, but happy, we drove ashore and celebrated.

Sunday was the last fishing day, and we got up extra early this day to make the most of it. The weather was absolutely beautiful. The fishing day started with looking for the big win, but it was not as promising as the week before. We got some simple Coalfish now and then, but not the quantities that were there before. But they are coming back. Luckily, there was a lot of Cod under the smaller Coalfish again, and there was non-stop action on the Cod. As soon as you got to the bottom, it produced a nice Cod of around 5-10 kilos! Now it was the Halibut’s turn, and the rain was coming down. A lovely period on the tide in unique places. We picked up some small Coalies for bait, and went on the very first drift. There was good current in the area, and we drifted for about 1.5 knots. Leif Magne had tackled a whole Coalie, and ever since he hooked a Halibut the first day and lost it, only Halibut remained in his head. We drove up the edge of a 25-meter stop, and then it narrowed! Leif Magne had solid fish, and they just howled from the reel! The fish went down several times and did not give up easily. But after fighting hard against the Halibut, I was able to secure Leifs very first Halibut of 118 cm! The jubilation was once again loose…

We set up several drifts in the same area and had a few more contacts. Luckily I managed to catch a small 70 cm Halibut at the very end, and when we had to crank up to change places, a Halibut followed right up to the boat after Leifs saithe. It was not a giant fish, but around 70-80 cm. It’s always cool to see them chase! And we should see that again. Because when we arrived at the last fishing spot of the day, it does not take more than 5 minutes before Sverre stands with a rod bend! This was guaranteed a Halibut. The fish rusted out, and I prepared the Halibut hook and cranked it up. It was about 50 meters deep, so it took some time before we saw the fish. Finally, we saw it, and there is a nice Halibut at the other end of the line. But when I looked towards the Halibut, I saw another Halibut under it! The other Halibut was slightly larger, and it swam even closer to the surface. I respond by throwing out the jig, and jigging with the string in hand. The fish was immediately interested and slid away towards the jig, and snapped down on the jig! I jerk, and the fish slams with its tail on the surface and speeds down to the bottom! Laughter broke out in the boat, and the Halibut rusted at full speed. What an insane experience to see it take to the surface. Then I hand the rod over to Dad, and help Sverre with his fish that stands and rods just below the boat. We measure it to 83 cm at the same time as dad keeps up with the other fish. Dad gets the fish pumped up to the surface, and we land it immediately after! That fish was not a real giant, but a 107 cm fish that takes to the surface you never say no to! After this wild experience, we thanked each other and returned home after three wonderfully nice fishing days…

At the moment, there is little fishing on the agenda, but a few trips will be enough. Now it also looks brighter with the vaccination, and the whole infection situation. Now we just have to cross our fingers that things get better, and that we can open up our camps fully over the next few weeks! Feel free to contact us if you are interested in a guided day trip with us in Lofoten as well! Many nice days waiting here now…