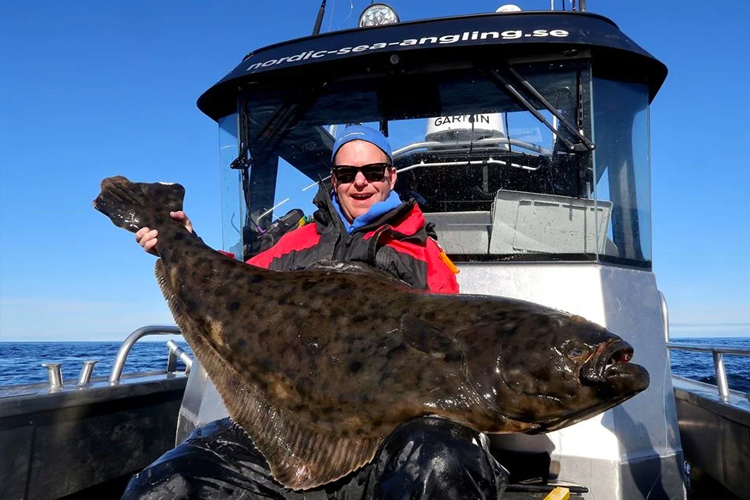 Havoysund The Land of The Halibut

As mentioned recently we should now start to get more and more reports from Northern Norway as more countries are allowed to enter Norway. Havoysund is our next report and by the looks of it some of the guys are taking full advantage of the amazing new Guide boat at this destination.

Havoysund is one of my personal favourite destinations as the fishing grounds vary so much and around each corner there is huge potential. Once you team an area like this with the best guides and boats available you will soon find yourself in an anglers paradise. I will now hand you over to Nordic Sea Angling head guide Douglas for his report:

Then a new week started here in Havöysund and the weather has been with us in recent days, and even the fishing!

On Thursday I picked up a new excited bunch of 6 Norwegian guests at the airport in Alta, the guys are real Halibut freaks and they want to do everything in their power to hook on big halibut. During their first fishing day last Friday, the weather was really cool and the gang started their journey directly in the morning by landing the first Halibut of 140 centimetre. During their first day they landed 8 Halibut of which the peaks were 135, 140 and 143 centimetres, an awesome way to start their week. Our NSA guide Jørgen also visited here  and on his first days fishing they managed to land 10 Halibut landed on an evenings fish with two nice 140 centimetres!

During Saturday, my Norwegian guests were unbelievably excited of chasing fish of larger caliber, and the place Jørgen fished the day before is a place that usually holds big fish and because it was on fire I told them to go there, which turned out be absolutely right. When they arrived and released their rigs, it was Daniel in boat 11 that had the first activity and his first instinct was that he had hooked the bottom but he quickly noticed that the bottom began to move … After a brutal fight with the fish being hooked at 50 meters down and after a bit of struggle Daniel could see his dream fish being landed and with it being quickly measured at 170 centimetres, what a dream fish! The day continued with good action and fine fish and they landed several fish at 143 and 133 centimetres!

During yesterday, we decided on a long tour and first ever trip in the brand new guide boat. So at 04:00am we went on a long trip in the hope of being able to hook up a real monster. Once in place, the fishing was completely off the scale from the start and it did not take more than a few minutes before Daniel got hooked in the first fish , congrats for christening the new guide boat with a Halibut of 113 centimetres! In the same drift just a minute later, it knocked in Steffens’ rod and he had to sweep up a 133 centimetres fish with a somewhat special tail fin. During the following 3 operations, we continued to hook really good fish in the guide boat at 139 and 139 centimetres and I myself dropped a really nice fish where the assist cord to my stinger snapped off under really hard pressure…

The remaining 3 Norwegians in the other boat also had good fishing with many landed Halibut during the start of the day. Jørgen fished in another area a little further south of us and had a real race with 15 fast bites in a few hours in the morning but no real big fish. We were determined in the guide boat to stay in this well established big fish area and the guys were completely on the form and after a few hours of nothing it finally bursts into Steffens rod … we chose to fish with really big bait it usually only means one thing, Steffen had released down a really fatty haddock of 3 kilos and the remaining baitfish were marginally smaller. When Steffen got hold of his rod and pulled the brake on the fish that swallowed his mega bait, it was an absolutely brutal bend in the rod followed by a sick head shake, but when the fish started swimming, it didn’t get hooked and the fish was gone !!! The mood of the boat was low as it is never fun to drop a big fish and no one really wanted to talk about it but it was just to continue to fish on!

During the evening the next period started when the fish bit again so we got a really nice finish to the day, continued many fine fish in the 130-140 cm class, but when the guys in Jørgen’s boat were ready to return back to the harbour they could sum up a number of the entire 27 landed Halibut which is a really good day but not too unusual in this area! I chose to end our day in the Guidebåten in a really nice place a little closer to Havöysund, the current pulled really nice there and we had only drifted a few hundred meters before Steffen hooked on a really crazy fish on his glow jig and had a crazy fight. When I landed the fish next to the boat, Stian also strikes into a fish that put up a really crazy rush. We took a few quick pictures of Steffens fine fish which we measured to 144 centimetres.

After this nice 20 hour day on the sea, the guys at the time of writing are out and about big in the rain! I just received a report on a 144 and 146 centimetres so hold the hat because we’re not finished yet!

Wow Douglas what an awesome week so far, I have got a feeling they are going to catch something really special. And to catch 27 Halibut in a single day is amazing.

We are down to a few last weeks for the entire 2021 season so if you fancy fishing the world famous Havoysund, Norways most northerly destination then get in touch 01603 407596 or you can send us an email with your details info@sportquestholidays.com