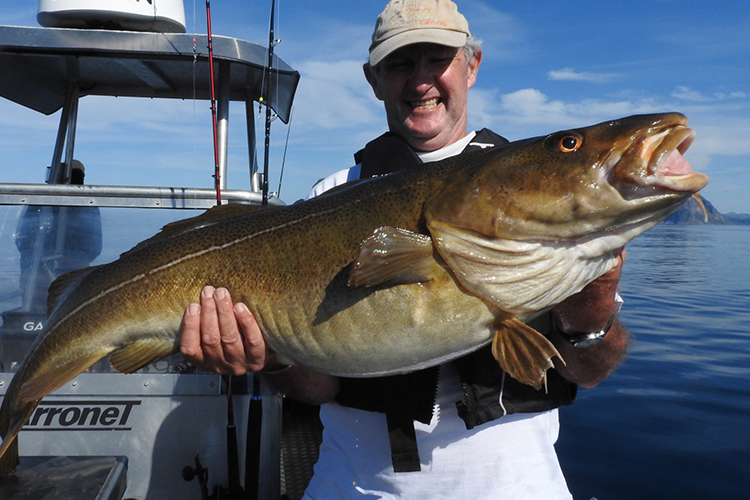 As many of you may know, we currently have a large group of anglers on our very first Hosted trips to Norway of 2020….. The destination is Nappstraumen on the Lofoten islands and Ross is the guide. He is sending us daily reports which will be out soon, but the below report is from the destination Manager Calle:

A new week at Nappstraumen first fishing days are completed, it has at least been summer heat these days with 25 degrees and flat calm water out on the north side of Lofoten. This week we have 9 loaded Englishmen from Sportquest Holidays with Ross in the lead. The guide Calle has been out driving the guide boat with 4 of the English guys and Ross has been out with the rest. To say the least, there has been speed on the fish despite this summer heat that has come in.

The first day of fishing the customers did not hold back due to everyone’s fishing cravings for so long. So we left the bridge early in the morning and decided to go out on the north side. The plan for the day was that we would have mixed fishing. When we arrived and put the first drift, it did not take many minutes before a nice cod was landed in the guide boat. This continued during the day with many fine Cod up to 13 kg and many fine Coalfish between 3 to 7 kg.

On Friday, the weather forecast showed more magical weather on Lofoten so Calle presented a plan to go on a long trip and the English caught on. It turned out to be a good plan for this day. The guests who were in the guide boat were eager to try some halibut fishing when they arrived at the place where they would fish during that day. After fishing the first drift the customers were in contact with a halibut which they unfortunately missed. Shortly after they had missed that fish, it nibbles on another rod in the boat and this fish turns out to be sitting still and while the guest pulls it up, it slams on another rod. It turned out to be two fine cod of 10 and 11 kg respectively. After a bar of cod around the 10 kg class, the first halibut for the day finally steps on. That fish was measured to 78 cm and returned so it can swim on and grow. When they have continued fishing for a couple of hours, one of the guests in the boat gets a real bite. And after a hard fight, the fish broke the surface and Calle was able to secure the fish at the boat’s edge. It turned out to be a wonderful halibut of 146 cm. After some photography, this fantastic fish got to swim in the depths again.

The weather continues to be nice with light winds , so we decided to go on a long trip. We will focused on Halibut and after about 1 hour of driving with a stop on the way to catch baitfish, we finally arrived. Already on the first operation, the second boat with Ross gets in a halibut of 95 cm. Shortly after, another rod bends over in the guide boat. It was a great start to this day. After a couple of drives, three rods are nipped almost simultaneously in the guide boat and all sides. So now we stand and have triple strike on halibut in fantastic weather has on Lofoten. The Halibut was between 70 and 80 cm so they could quickly swim back into the sea.

Excellent report Johan and thanks for keeping us updated. I spoke to Ross the guide today and he seemed really pleased with how things have been going. If you would like to join us next year then we have now released all our 2021 Hosted Norway trips and also have set aside some weeks for 2022. Simply call the office on 01603 407596 and we can get you fixed up with that dream fishing holiday.