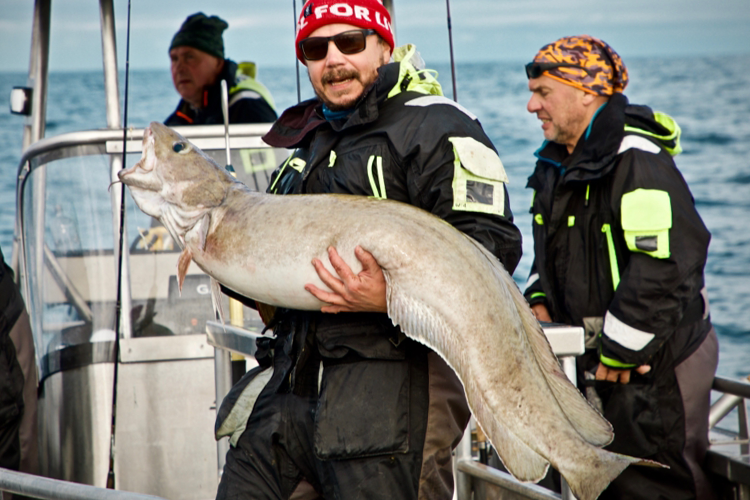 The last few weeks in Nappstraumen has been challenging, with the rough weather making the fishing difficult, but the forecast is looking much better for the coming weeks, with settled weather and sun just around the corner.

With the weather making trips offshore almost impossible, we’ve concentrated our efforts on Plaice fishing close to the lodge. Most boats managed to find a good few fish, with some nice spotties around the 2kg mark. A small Monkfish on the guide boat also added a bit of variation.

On the days when we have been able to venture further afield, we’ve managed some nice Cod. We also tried fishing in some deeper water with heavier Jigheads, and when fishing like this, you really can hook anything! After hooking and battling with what they thought was a giant Cod, one of the Swedish parties had a surprise when a big Ling of 20kg broke the surface. Many other Ling followed throughout the day on the same mark, including some nice food fish to around 7kg. The fish came from an area we’d not fished that many times, so it’s an area we’d like to explore further when the weather allows.

The weather at the weekend was more stable, and it was agreed we’d all set a course for an area in the north, some mixed ground with a group of plateaus and peaks between 75m to 85m in depth, dropping right off to 230m. The VHF radios were alive with chat on the journey out there, and everyone was full of anticipation – I’d asked everyone to keep in contact and to report back on how the fishing was going.

It wasn’t long before the radio sparked into life, and reports of nice Cod and Coalfish, as well as a monster Halibut, lost on Hakon’s boat, started to flood in.

After a few hours fishing boat, eleven was on the radio to say they’d landed a huge Ling. I asked them to measure the fish before I steered the boat over to grab some pictures; the message came back on the radio “151cm” and over 20kg in weight. It was the first time we’d fished this area, and it was so cool to see such a monstrous fish!

We carried on fishing and enjoyed some excellent action with more big Cod, including a 20kg+ fish to Hakon’s boat and Coalfish before the weather turned and it was time to head back.

We’re now waiting for the next group of guests to arrive, and we have our fingers crossed we can return to the new area and report back with some more special fish next week.