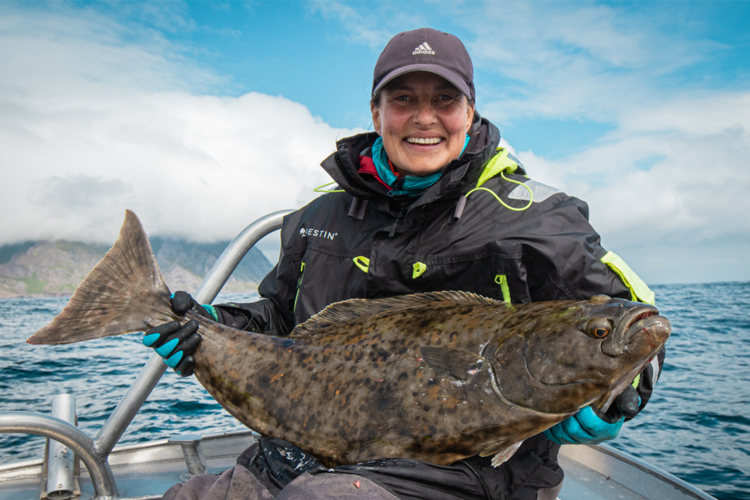 It really is starting to seem like A is the place to be at the moment if you’re looking to land yourself an absolute monster Halibut! This week proved to be a very good week other than the weather!

Last week we had a visit from our first foreign guests from Denmark. None other than Jakob and Michael’s son. They have been up here several times and fished purposefully for the large barn doors that lie out here. We also had a visit from Ivan and the gang from Havøysund, who we know well from before, so it was very nice to meet the team from even further north. Unfortunately, the weather was not quite optimal that week. However, the first two days were okay, and gave a really good result for the Danes!

The first day, Jakob and Michael drove out, and fished all night in hopes of a really big one. I’m not sure what order the catches were that day, but the result is not to be trifled with. They manage to get Halibut of 153,155,155,155,170,173,180 and 192 cm. On the same day! It’s completely crazy. And more nice Halibut in a smaller size. They ran a clean catch and release fishery, and released all the fish they caught that day. It is only to be congratulated because that result is completely crazy! Ivan and the gang in boat 10 also had some nice fishing with several nice fish in the 10-20 kilo class, which were put back nicely.

When the wind was to be at its worst on Sunday / Monday, the fishing was somewhat amputated. But Jakob and Michael still went out with a bit of lighter spinning equipment and fished for Pollack / Bleak! With a very good result, of which many were in the 4 kilos class, and with a peak of 6.4 kilos. And this right outside the camp on Å… Which is an excellent alternative when the wind is at its worst, and you are limited to the local area. It is also some fun fish on lighter equipment and offers brutal runs and battles. Fortunately, the wind was to subside somewhat on Tuesday, and you could finally travel to the halibut sites. The previous wind characterized the conditions, and it was quite difficult to fish. But there would still be nice fish in both boats. Jakob and Michael each got their own fish of 140 cm and 147 cm this day; hence both got their freedom back after measuring. Ivan and the gang got some smaller fish this day, but it was finally going to suck for something bigger at the end of the day. Roy had lost a gigantic fish the first day, and was probably Halibut. In the current reversal, it was supposed to happen, and it hit hard. After a wonderful fight in strong current, Ivan was able to secure a beautiful halibut of 160 cm! After measurement and photos, the fish was released nicely back. The average this week here has been incredibly high, even though we have not picked up any of the real giants.

I myself had two guided tours this day. In the mornings I had visits from Heidi, Paul and Moana who come from the same place as me, so we knew each other well from before. It was very nice. And even nicer is that we got good with fish… We fished in an area that has delivered well lately, and chose to spend our 4 hours on halibut. It did not take long before Paul stood with solid fish, and got the first halibut of the day at 115 cm! A great first halibut! In the same operation, Heidi gets a smaller Halibut of around 70 cm on her jig, and we had several contacts. We had to put the last drift of the day before we went home. And then something happens to Heidi. The jig is inhaled, and the rod bends straight down, the reel rushes. After a fun fight, I was able to secure another nice Halibut that was just under a meter! Thank you for a pleasant session at sea! At 4 o’clock I was visited by Claus and his children down on Å. They were on a Norwegian holiday, and lived in one of our cabins on Napp. The wind had picked up a little, but it was fishable. They wanted a mixed fish, so we drove for halibut first. The first drift were fairly quiet, except for a few contacts. But when the power started more, things started to happen. Claus makes contact, but the fish escapes. He got a little frustrated, and kept the jig completely still. Then it claps! Claus puts a good counterattack, and the fight is on. I get to secure Claus’ very first Halibut after a fun match, and measure it to 96 cm! As we land the fish, it screams at another rod that stands with a bait. Unfortunately this fish would not join the game, and let go after a few seconds… We decided to try some saithe, and got some nice Coalfish of 7-8 kilos whole trolling! We stopped and tested a bit with the jigs, and got both nice Coalfish and cod of around 7-8 kilos! And then it was time to go in again…

Now Norway is finally starting to open up a bit again, and things are starting to look normal again. Even then, I travel up to Vesterålen for the week, and stay there until the end of the season. But there are finally some people left at our camps here, and the colleagues get to come in and work. It should be so cool to be up and running again .. Thanks to all the guests I have had on Lofoten this year! Hope to see you again. I would like to remind you again that it is possible to book guided day trips on our camps during the summer. If you are on a Norwegian holiday, and want to experience some of the roughest fishing we have, then just get in touch!