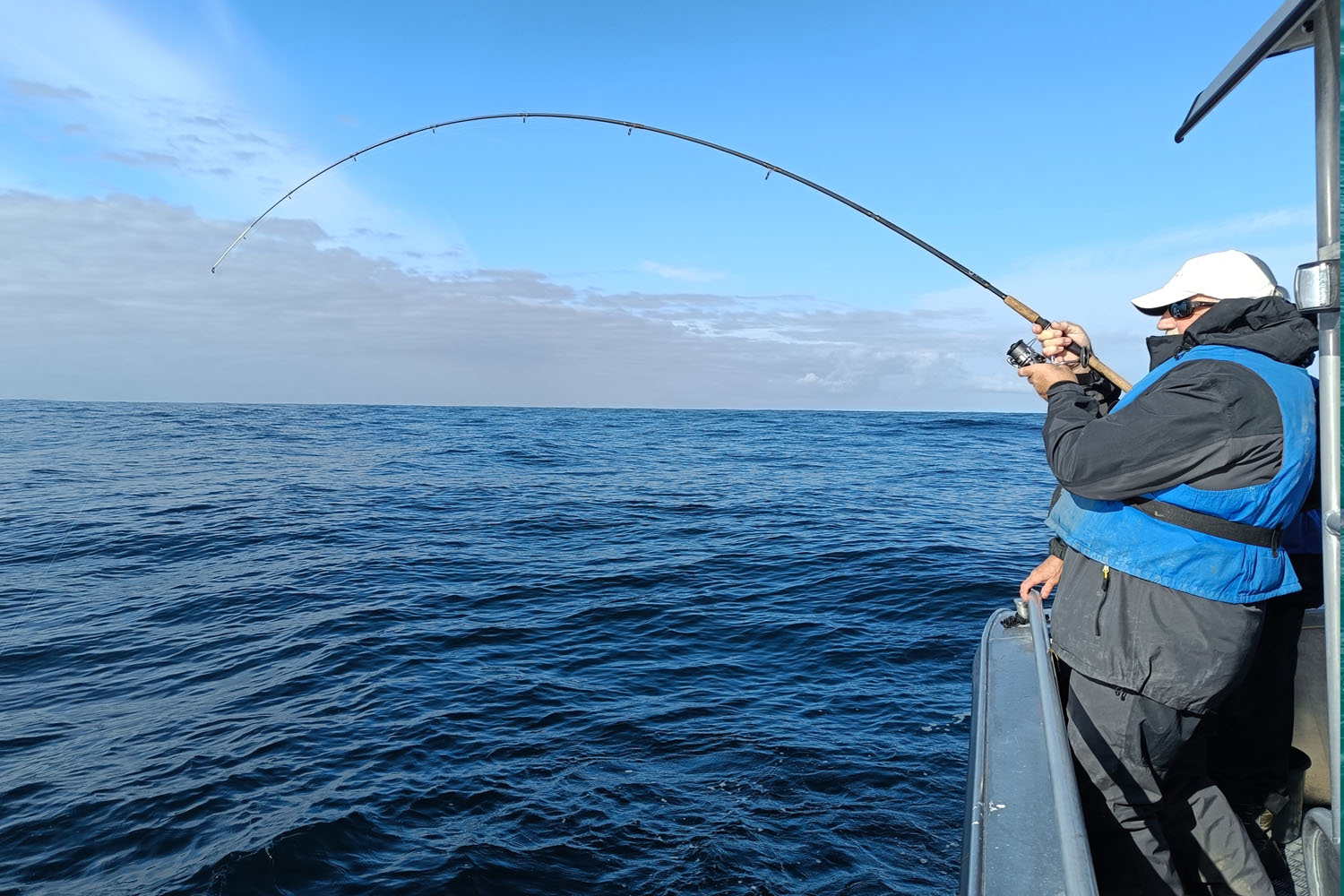 Then it’s time to sum up another week from our camp Nappstraumen on Lofoten.

The week started with really bad weather with rain and strong wind which limited us considerably. As soon as the wind died down, we went out and fought in tough conditions to say the least.

On Saturday we managed to fight our way down the south side. The fishing was quite difficult but a couple of better baits were landed up to 8 kg this day. Our guides Johan Mikkelsen and Kristian Hausken reported good Whiting fishing with both double bites on Whiting and the largest of 4.5 kg in Johan’s boat. Really fun fishing on lighter equipment. They also landed a couple of nice breams up to 6 kg after Kristian found a large shoal of Haddock where they landed bream up to 8 kg!

Then round them off the day with some Plaice fishing a stone’s throw from the harbor where the two good friends Peter and Kevin in Johan’s boat each caught a nice Plaice, the largest of which was a full 50 cm (approx. 1.5 kg+). The two friends travel the world in search of new fishing stories to tell and their age of 75 doesn’t seem to stop these two legends!

Kristian and his guests also landed several nice Plaice, the largest of which was 50 cm before they rounded off the day as well, a clearly successful day considering the conditions they had.

Despite difficult conditions, it was a good start to the week, but with better weather, the fishing became even better.

Our guide Calle Hjelm then steered the guide boat on Sunday where they took aim at the north side. They were met with a lot of old lake but managed to get all the way out to our better fishing spots. They got a bunch of nice Cod with a top of 13 kg and tough up to 8 kg! A couple of the other boats went more south-west and some boat teams scored just right and got to experience a real Cod race with a peak of 17.5 kg. However, the cutting periods were short and intense. However, some boat teams did not spot as well and only managed to lure a couple of fish during the day. The marked cutting periods meant that you could easily miss them or that you were in the wrong place at the right time, etc. But this should also be corrected during the week.

On Monday, the weather was even better, so Kristian went out with the family again on a 4-hour trip where they once again managed to hit the mark with the biggest Cod of about 12 kg! Good quantity fishing overall with a lot of Cod. They also met a large school of Pollock with a top fish of 6 kg. This day the whole family also felt much better as they got used to the lake and what new memories they take with them from this trip. If you want to create lifelong memories with your children, come to us in Northern Norway, it really is a fantastic experience for the whole family!

Johan drove the guide boat this day and flagged for a long trip on the north side to an area where we usually have good quantity fishing for both Pollock and Cod but also with really good chances for Halibut. Several boat teams came along for this long trip and the guests were, to say the least, charged up for this day after the tough start to the week. Halfway through they stop and quickly fish up a group of bait fish they intended to have for the Halibut. They get both small Coalies, Mackerel and Herring before they continue towards the place where they intended to fish during the day. Boats 9 and 10, which went directly to the site, were met by a couple of whales who put on a show and swam directly under the boat and circled around them several times. A powerful experience to say the least.

When the guide boat arrives, it is low tide and the current is still quite weak. They then choose to focus on a little Cod fishing. Several nice ones were landed around 5-8 kg then Kevin takes the biggest of the day in the guide boat at 11 kg taken on a Crazy Daizy 300 gr. As soon as Johan saw that it started to flow a little more, he tells his guests that it is time to re-rigg and go after the Halibut. Peter who caught the one big Herring, immediately asks if he should use it as bait now. Johan looks out over the sea and then says – “No Peter, just wait a little bit more, I’ll let you know when its time”. Peter laughs and puts the Herring back. The first drift Johan checks which direction they are drifting in. The second drift he chooses a new place to get drifts exactly where he intended. But still not streaming quite well yet. An hour later, the water really starts to pick up speed and Johan tells the guests that it’s time to wind up. He turns to Peter and says that now is the time to re-rig to the Herring. Peter follows his advice and Johan places the boat on a new drift. All the guests on the boat were fully loaded, everything felt right. Not long after, the real thing happens, Peter gets a pacifier, he releases and carefully holds the tension with his thumb on the spool as he fishes with a circle hook, two strong bites, then it pulls away! Johan stands next to Peter and asks him to wait while the fish pulls out the line. In the middle of a rush, Johan shouts “NOW! wind, wind, wind… And Peter throws up the brake on the strike and starts cranking, the rod gets heavier and heavier and then he stands with a deeply bent rod and a Halibut rushing away.

At the same moment, Johan calls out to the other guests in the boat to wind up. But all of a sudden he sees Warwick standing with an equally heavy rod bend and a reel that shoots out line. DOUBLE HIT!!! A really intense fight and soon after Peters got his Halibut up to the edge of the boat. Johan secures it with the halibut hook. A nice fish of 90 cm, soon after Warwick’s Halibut comes up which is a little bigger and this too is quickly secured at the edge of the boat. A nice fish of 111 cm and the guests in the boat are celebrating the success. Johan smiles with satisfaction when everything went as planned. Even though he knows deep down that you also have to have a little bit of luck to succeed. But that’s exactly the charm of fishing, you never know what will strike and no rule without exception.

Johan also says that a couple more Halibut were landed this day with two more around 110 cm and one smaller. But the top fish of the day still went to Henrik from boat 9 who landed a Cod of 20 kg+ in this place!

Once in port, Johan meets some of the other guests who have chosen to fish a little closer to the camp. A bunch of nice Cod, Whiting and the occasional long one of a nice size. But what stood out the most was a Marulk of about 4 kg! An incredibly rare fish to catch on the hook, where only a few are caught every year distributed among our campers.
The group with Johannes and the gang also tells that they saw a herring shark swimming calmly past their boat when they were out on Skarvskär fishing. A rather special feeling considering its typical shark appearance. Like a great white shark in a smaller model, this one at about 2.5 m.
There have been many Herring shark reports from our guests during this season. A species that has been highly threatened due to overfishing but is now seen more and more often in our waters. However, it is red-listed, so if one were to hook one, it should be released back as gently as possible. Which may be easier said than done given its size, teeth and strength. Most of the time, these sharks win the battle when the line snaps against its sharp teeth. Thus, you may not direct fishing after them unless you have approved this via the research institute.

On the last day, the sea was flat and the sun was shining. A wonderful last day for the guests. Some boats chose to go on long trips again and others chose to fish a little closer. Compared to yesterday, the last day’s fishing was generally a bit more difficult, but where a couple of boats still hit the right spot. Kristian, who drove the guide boat today, told about good quantities of Coalfish in the size class 3-6 kg, Cod up to 7-8 kg and a nice Whiting of 4 kg that swallowed their Mackerel that they had as bait. They also landed a Halibut from boat 10 on the last day and that had to be the end of the week.

The weather was incredibly tough to begin with but ended in the best possible way. Most boat teams also managed to hit right a couple of times during the week with really good action, although it could be more difficult to get the fish to bite at times. Now we charge for a new week with new charged guests!