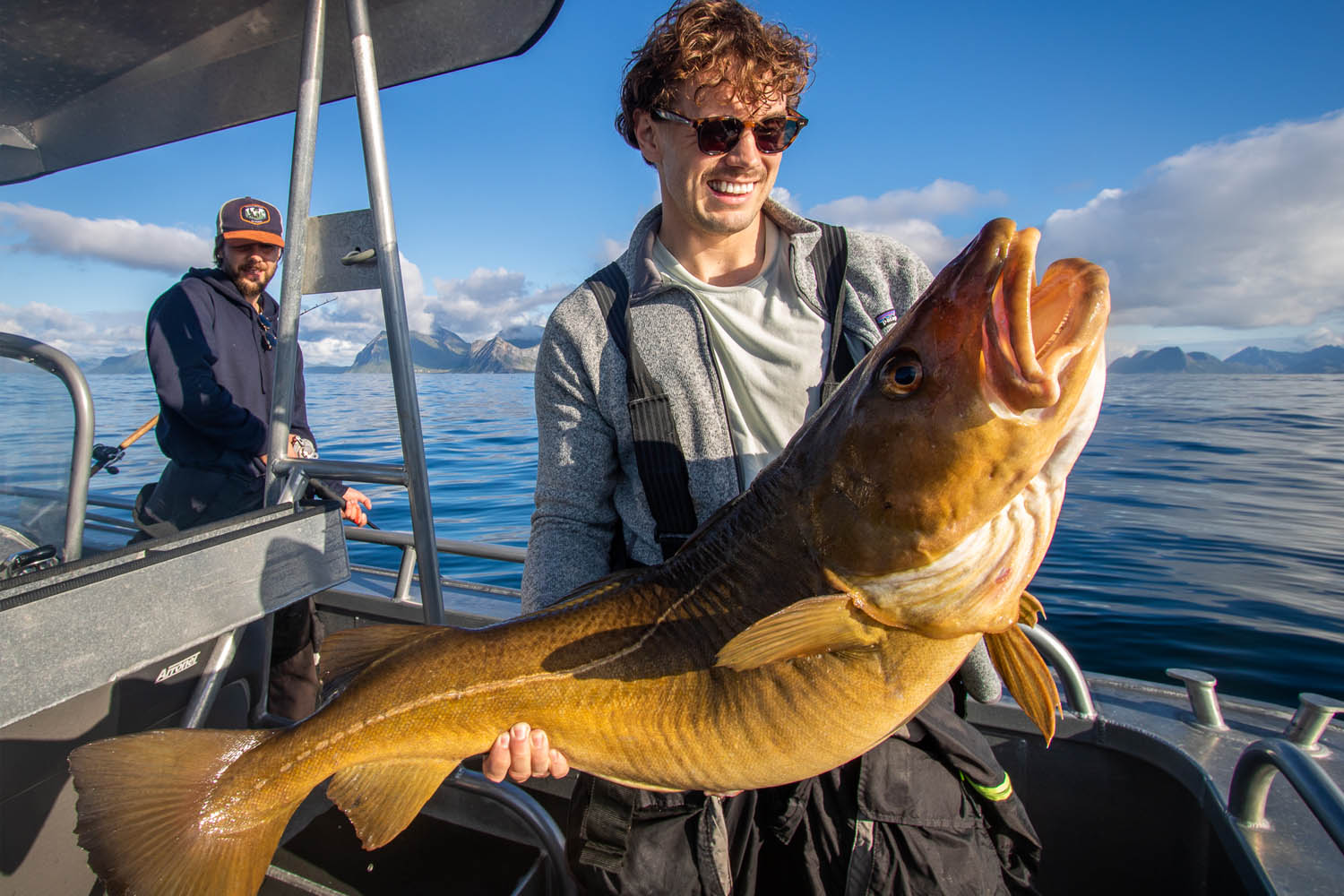 This week has been a difficult fishing week, but in the end everyone managed to score right at least one day in the week. The weather has been relatively good and the guests have come out every day at sea. But some days the base peaks were filled with bait fish, but the Cod and Coalfish were difficult to catch. Other days, the fish shone with its absence to turn into full on bite bonanza a few hours later. Yes, the fishing has really been varied this week and it has been many days you have had to struggle to find willing fish. But as always up here, it always resolves itself in one way or another, and in the end you find the fishing you went up for. Then you only need a few hours of action to feel the lactic acid in your arms and you quickly forget sluggish days.

The Dutch group Kouwen told about a completely magical night shift where they chose to go out in the midnight sun and dot in when the wind and waves were at their best. As they had previously had rather sluggish fishing before, they decided to try something new, it turns out to be a really successful decision. The sea was almost like a mirror when they came out and quite immediately they started chasing Coalfish and Cod out on the deep edge and not long after that they stood with both double and triple hookups. The largest Cod landed weighed 14 kg and Coalfish 10 kg +. They drove for a long time until there was no more energy left. Then something happens that made the guests really rub their eyes when a Shark fin breaks the water surface and swims calmly past the boat. A Shark that they estimated at about 2 m. Since they did not have time to take either a picture or a film, we can not determine what type of Shark it was. But since the bride has a very marked dorsal fin, it speaks more because it was a herring shark, but we leave this unsaid. A clearly unusual sight, but this is not the first time our guests have seen herring sharks or even had herring sharks on the hook. (But never managed to land anyone). After this, the exhausted but incredibly happy group of Dutch decided to slide back to camp after a magical night that they will never forget.

The other Dutch group, Kuijper, instead focused their fishing mostly on Halibut and Plaice, but also caught species such as Ling, Redfish, Haddock, Pollock, Coalfish and Cod when they tested a little deeper mark. But after the first day’s guided tour together with our guide Johan Mikkelsen where they found a new place for Plaice, a desire was ignited to beat each other’s records, so during the last days it took a couple of hours to explore the area more and it turned out to be another success when they got a top fish of 54 cm and 52 cm and many around the kilo. A really awesome fishing that you should try up here. Stefan also managed to land a nice Halibut of about 110 cm and one of 120 cm during the penultimate day. Boat 2 also caught the Plaice fishing when Johan told what fantastic fishing they had during the first day. They also land several around a kilo with a maximum of 1.78 kg to Patrik, a cruel Plaice and we take the opportunity to congratulate him on a new PB! (More pictures to come)

Boat 10 with the Hellström family also reported that they managed to hit right the penultimate day with a real Cod bonanza with the largest Cod around 15-20 kg! Also some nice big wins and generally good fishing on their long trip on the west side. On the last day, they directed the fishing closer to the camp and also landed some nice Plaice and a small Halibut.
Our guide Calle Hjelm also did a 4h guided fishing last (Tuesday) evening where they landed a lot of Coalfish and a nice Cod of 13 kg. Despite so few hours, it really got to experience a cruel fishing on a mirror-shiny sea. Another proof of what potential there is here in Lofoten, a wonderful experience for the whole family.

Boat 9 with Conny and the family has had a pole out during the week and has had to struggle to find willing fish. But the last day they dot right and when we met them in port there were big happy smiles on their lips and next to them were the slopes filled with nice Cod up to 13-14 kilos class. A real thunder end to the week. The fact that they also got killer whales earlier this week made the summary of the week, after all, a really nice week. Especially for the children Ville and Cornelia who have fought out at sea and caught a number of cool species and tampas with big fish, to then come ashore and continue fishing at the pier or climb mountains. It really is a fantastic experience for the whole family and a perfect way to activate the children with activities that they will soon forget. A memory for life!

More fishing reports from us in Nappstraumen will be coming soon!