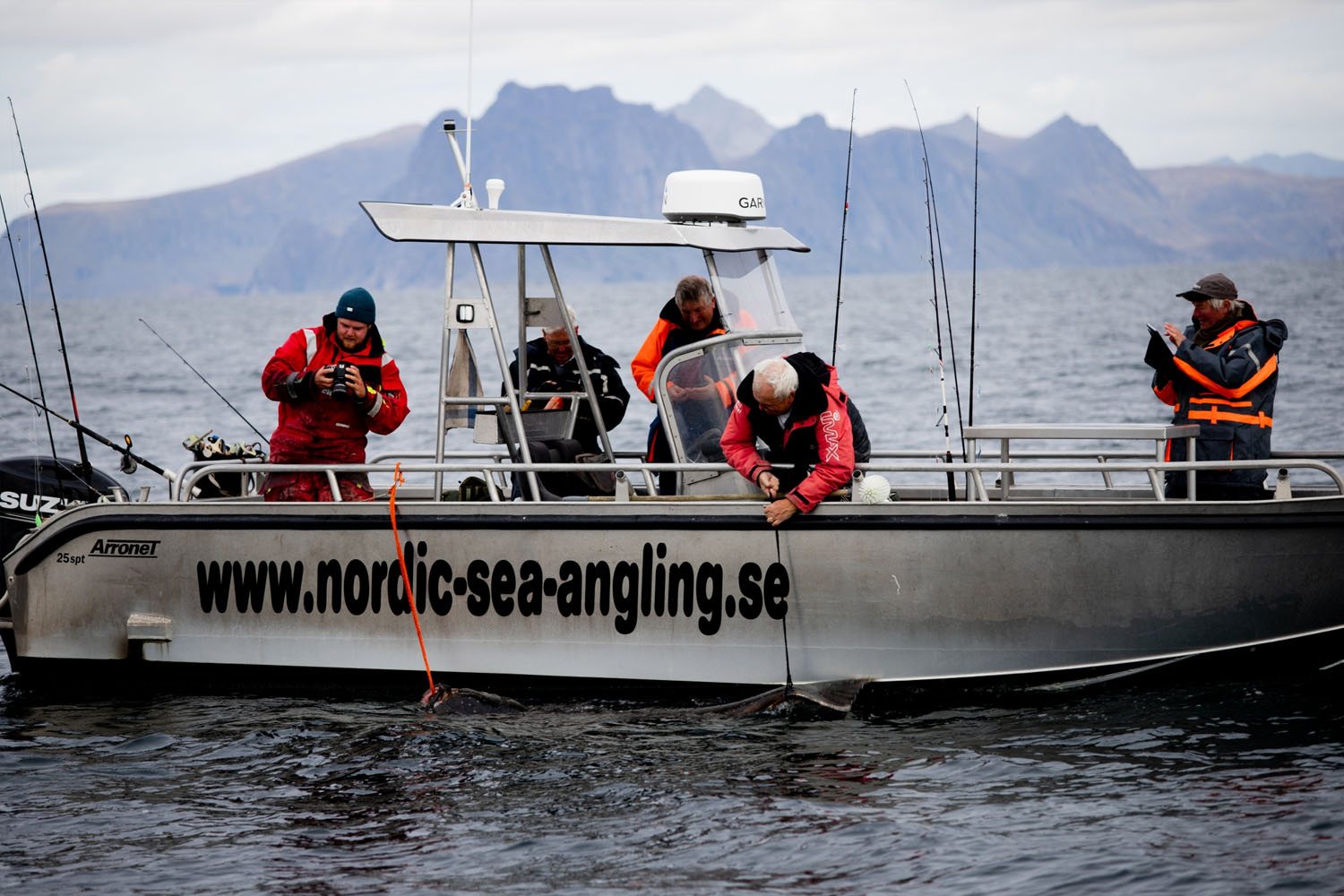 We’ve said it before and we’ll say it again – AUTUMN FISHING IN NAPPSTRAUMEN is a fantastic time for Halibut! We talk about both quantity fishing and a really good chance of BIG Halibut!

This week has been dominated by strong winds from the northeast, to say the least it has been a difficult week for the guests who were extremely limited to the immediate area. On the outer side of Lofoten there have been waves with an average height of 3m and wind that fluctuated between 10-15m/s. With these weather conditions, we could never have dreamed that we would be able to experience such great fishing as we did anyway.

During the week, the Nappstraumen has been stocked with large quantities of bait fish, which is a good sign for autumn fishing. However, the quantity of Halibut does not seem to have really had time to enter the stream yet. A couple of nautical miles out, however, there have been large concentrations of Halibut. Even the Plaice are getting bigger and bigger, which has been a nice alternative when we couldn’t go out on the open sea.

After a difficult start to the week due to the weather, boat 7 then hit a really good mixed fishing on the south side of Lofoten. Here they got to experience a good amount of fishing for both Cod and Pollock, where the top fish were around a meter long. Incredible amounts of mackerel were also caught in the area. A good alternative when you can’t go out on the north side of Lofoten, where the best fishing normally takes place.

However, our guide Marcus Pettersson managed to fight his way out a couple of nautical miles on the north side, which resulted in the week’s first 2 Halibut in the guide boat, a couple of smaller ones were also caught in the vicinity during the same day. However, it was only on Friday that the guide Johan Mikkelsen managed to get a little further out to sea on the north side, despite some rough seas, that the real “Halibut Rabonanza” started. Already on the first run, Reg managed to catch the first Halibut of his life of 86 cm. A good start but then it took a couple more hours before it started again. It started to flow more and more and the fish became more and more active. A new drift was laid and then the chaos begins with a triple strike on Halibut and a nice cod on the fourth rod. Those who have caught a Halibut before know that there is plenty to be done just by trolling a Halibut.

All Halibut were landed where 2 were below the measurement and had to swim on again and one was 83 cm. The guests were ecstatic and Johan steers the boat back and places a new drift in the same place. It doesn’t take long until it clicks again and again… A double whammy! This time, too, both managed to land, but these two were also below the standard and had to swim on again. After this they decided to leave the place and try to find bigger fish. A couple of contacts but no more were landed this day. A total of 6 Halibut were landed in the guide boat this day, each from a triple hook and a double hook. An action-packed day at sea to say the least!

The next few days we were limited to Nappstraumen and the south side. A couple of Whiting, smaller Cod and Pollock were caught on the south side and a couple of contacts on Halibut in Nappstrumen but none landed. One of better caliber where unfortunately the line broke during a brutal rush. So that they are there, there is no doubt. When the weather started to improve again, the guests went out on the north side again. Marcus tells about a really successful Plaice fishing with a top fish of a whopping 60cm! Several over 50 cm have also been landed during the week.

Then came Tuesday when the boats were finally able to get all the way out on the north side despite some waves. Calle steers the guide boat and Marcus guides a group from Germany.

Pretty straight away they noticed that the Halibut were on the hook and not long after a nice Halibut comes all the way up to the edge of the boat to inspect their baits in Marcus’s boat. After probably 10 minutes of circling around the boat, it decides to take guest Hanne’s bait. A fierce fight with reel equipment and Hanne’s first flounder was secured! A nice fish of 123 cm. Calle also reports on a nice fish of 116 cm and even just under the measurement.

A good start of the day. Then the same thing happens to Calle as to Johan a couple of days earlier. A TRIPLE HIT AGAIN, complete chaos in the boat, but Calle and the guests nevertheless manage to land all the Halibut that were of a smaller caliber. Instead of putting a new operation in this place, they decide to search new areas in search of bigger fish, something that would turn out to be a real success!

Calle searches around and goes between large areas of “shit bottom”, i.e. with a lot of seaweed on it. Then the bottom line comes in the middle of it all and Calle tells us that it felt just right. There must be some Halibut lurking here. A couple of minutes into the operation, Calle sees something really big on the sonar that goes up to guest Keith’s baitfish. He shouts out that it looks like something bigger is coming up now, the next second the guest’s rod bends and he shouts back that he has it! Calle immediately understands after the first head shakes that we are talking BIG fish here. Then it takes off and the other guests turn up as fast as they can. The line squirts out from the reel and Calle has to follow to avoid the risk of the line running out.

Calle shouts this out to his colleague Marcus that something bigger is brewing, but he doesn’t dare say how big yet. Marcus stays in the immediate area. When he hasn’t heard anything for about 30 minutes, he asks again how the big fish went. Calle then answers in an excited voice that he has just seen the fish when it was up at the edge of the boat and turned. It is really BIG! Marcus goes over and follows the last part of the fight when the monster breaks the surface again after about 45 minutes of fighting and Calle places the halibut hook perfectly in the lower jaw of the Halibut. That it was a 2m halibut was not talked about!!! A big JOY in the boat, what luck, what a fish! It was measured at 216 cm, which is a fish of almost 140 kg according to the length/weight table. The fish was secured on the outside of the boat where it lay down in the water during the entire handling to be able to recover nicely. A couple of quick pictures were taken to then watch it swim back down into the depths again. Keith tells how powerless he felt during the fight while not wanting to give up. A mixed feeling of happiness and fear of losing it. It was really a relief to get it all the way up to the boat to admire it for a brief moment before it had to swim on again.

We at Nordic Sea Angling congratulate you on a fantastic fish and a day they will soon forget with a total of 5 landed Halibut and this 2m+ fish on top!

This is the season’s third Halibut over 2m in the Nappstruamen. Now we are entering a really hot period when the water temperature drops and the Halibut gather more and more. If you also want the chance to catch a dream Halibut, don’t hesitate to book in now during the month of October to optimize your chances for a fish of this caliber.

This had to be the end of a windy week, even though the guests were so limited to the immediate area, the fishing has shown itself from its best side as soon as they were able to get out to the desired places. A week that goes down in history!

A warm welcome to autumn fishing in Nappstraumen!