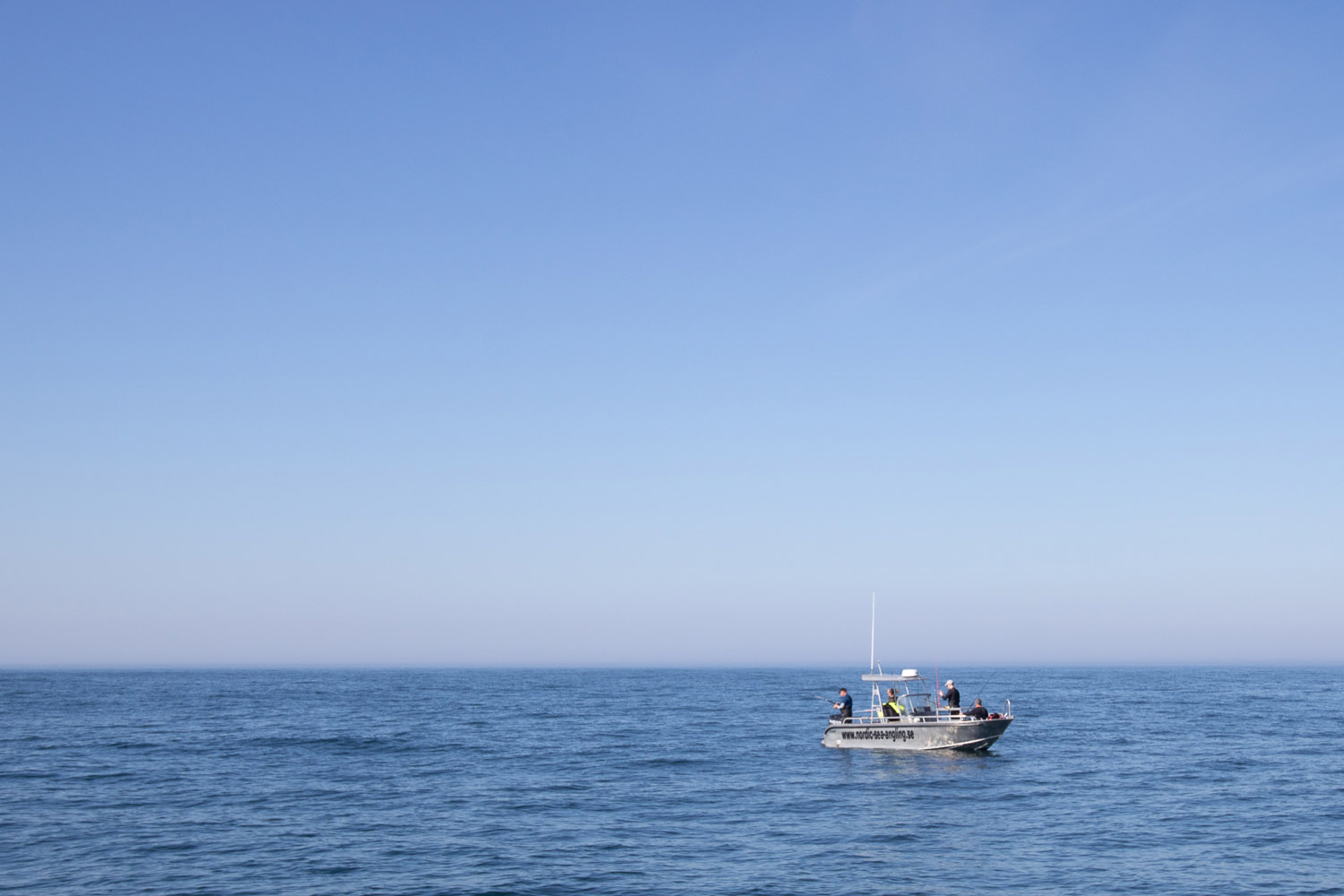 Earlier this week we had a storm that passed by which made the fish stand on the bottom and not want to eat. Several days of difficult fishing but shame on the one who gives up!

After the storm came the high summer heat with 28 degrees and sunshine. Light winds in addition made it a joy to be at sea the last few days. On Monday, the guides flagged for a long trip to an area that is usually really good for big Cod and Coalfish. After the slow start of the week, you can say that the people were shocked when they started fishing and caught both left and right with nice Cod and Coalfish. Calle says that the fishing was absolutely awesome! Sick quantities with a nice average size of Cod of about 6-8 kg with a maximum of up to 14 kg! Several big victories around 10 were also landed with a peak of about 12 kg. In addition to being a fishing bonanza that day, one of the sickest things Calle has ever experienced happened during his guide career. He saw lots of small Coalfish that began to jump to the surface not far from the boat. He throws a Plaice rod in the fist of one of the guests, the rod is rigged with a 62 gram Sandy Andy, he asks the guest to take a throw against the shoal of bait fish and then let the jig fall down a bit so it can probably slam on a Coalfish or whatever is pressed up to the shoal.

The guest flips the jig into the shoal and lets it sink according to Calle’s instructions, but before he has even had time to hit the jumper, it snaps into the spool and the line flies away at a breathtaking speed. He barely gets over the jumper and is immediately met by a thunderous rush that speeds down to the bottom. Calle glances at the reel and sees that there is not a lot of line left so he asks everyone to crank up so he can run after the fish. But just when he says this, his boatmate stands with a heavy rod in the back of the stern and asks Calle what to do, while the line sprays out in the other direction. Calle, which lay on a plateau, now has two larger fish rushing in different directions. He makes a quick decision and goes after the latter as it seems to be of really good caliber as it had also taken a large bait fish. Full panic in the boat but Calle keeps calm and maneuvers the boat to try with skill to get both of them up. Unfortunately, the really big one jumps off shortly after… They can now focus on the guest with a rod whose spool is almost emptied of line and a spool that is so hot that it almost starts to smoke. He also understands that it is not a big Coalfish he hooked on either, but a LARGE Halibut instead that now stands 68 m under the boat. Westin spinning rods can hardly bend more than this when they try with all their might to pump up the Halibut from the depths. Calle says several times that this will never work. It’s too big a fish and something will go off.

Slowly but surely they start to lift the fish from the bottom, Calle sees how the fish slowly approaches the boat via the sonar. He says that if we manage to get it all the way up, I only have one chance to try to secure this so everything must go exactly as planned. All guests in the boat nodded in agreement and followed Calle’s instructions. Then what must not happen happens. 15 meters under the boat, the fish turns downwards, and with a strong movement, it set full speed back down to the depths… Calle thinks that this is over, it will never work. But shame on the one who gives in, and after a lot of ifs and buts, they manage with the piece of art to force her up to the surface once again. This time Calle was done with the Halibut hook and when they see the fish down in the water, they also understand why it has been such a difficult fight on a Plaice rod with the small Penn reel in 4000 model with only 0.23 mm braided line. A really big Halibut comes up and Calle manages to secure it on the first try. The whole boat team cheers for the achievement and also via at Nordic Sea Angling wants to take the opportunity to congratulate a fantastic fishing story. The Halibut was measured at 153 cm !!! A fish that should not be possible to get up on such light equipment, but everything goes with a little patience and a big portion of luck!

A certain sadness over the first fish that stepped off which Calle judges was an even bigger fish but that is sometimes the case. The fishing continued to be absolutely fantastic during the day and not long after, Calle and his guests manage to land two more Halibut in the boat and if that were not enough, they also land a fourth on the way home from the long trip. A fantastic day to say the least here in Nappstraumen!

The last day, there were 4 boat teams that chose to stay ashore as they were so happy with the fishing from the long trip despite the sun was high in the sky and was probably closer to 26 degrees in the air. If you are satisfied, it is clear you can just cork up a cold beer and sit out on the terrace with its fantastic sea views. What better way to end a fishing week on this one? Calle, however, went out on a shorter 4 hour fishing with the aim set on a big Coalfish. They only pulled out to the first deep edge on the outside and there was full action with them in the 3-6 kg class and a top fish of 10 kg. The Dutch also reported a little Halibut during the last day otherwise it was more focus on just enjoying the wonderful weather.

We want to take the opportunity to thank all the guests for a fantastic week here in Nappstraumen, now we are charging for new guests and new big fishing reports!