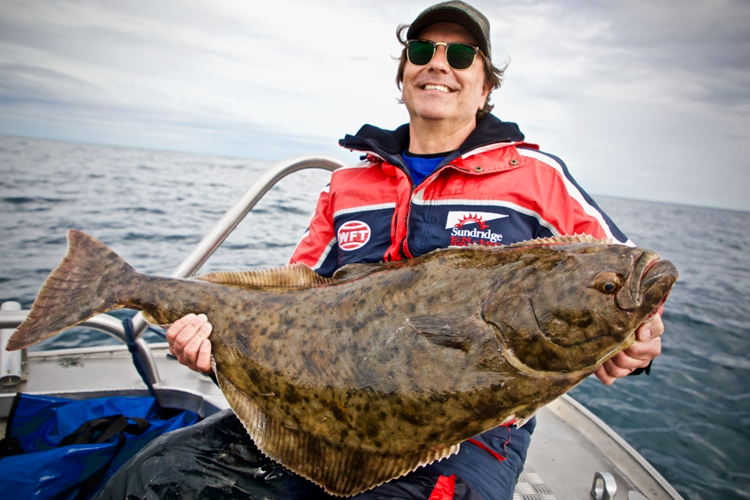 This week in Nappstraumen was treated to much better weather than what has been the last few weeks, which resulted in lots of customers PB’s being landed throughout the week!

The week that has been here in Nappstraumen has really offered some good weather! Brilliant sun, 25 degrees warm and light winds have meant that we have been able to get out on long days with great conditions!
Thursday unfortunatly had bad weather the whole day, despite that we came out to sea and managed a successful fishing session for Coalfish, Cod and Halibut. Our Swedish gang from the valleys and Stockholm already showed directly where the action would be on the first day with several nice Cod and Coalfish in the ten kilo class and a nice Halibut of 126 cm, not so bad considering the weather conditions!

On Friday, the weather forecasts finally showed nice weather with a wind speed of max 2m / sec, and the first long trip of the year would finally be on. I (Daniel) and Calle thus steered the Nappflottan towards the intended fishing area, well in not before filling up with some baitfish in the form of Coalfish and Mackerel, we could finally start fishing for the larger madams. In my boat we immediately land a nice Halibut of about a meter and shortly after Calle was able to report a Halibut of smaller caliber on the radio. The fishing continues with nice activity in my boat with some nice contacts and some nice Halibut up to 110cm before we could hear on the radio that boat no. 1 has landed a really nice Halibut of 155cm, not a bad first personal best and congratulations from us at NSA.

Time goes by and finally it chops on a really big fish in my boat which makes the reel literally spray out the line, at the same time when we crank up the other rods to be able to run after the fish it goes on another rod, a smaller fish around the meter became hooked and managed in some awful way to get entangled with the line on the really big Halibut we already had on… After trying to entangle the smaller Halibut for a few minutes we realized that it was hopeless and the reel which had the big Halibut hooked was almost emptied, I then make the decision to cut the line on the smaller Halibut so that we can drive after the larger one. The minutes go by and after finally getting the fish under the boat we were finally able to start the fight and after a while the equipment was no longer strong enough and the line snapped off, really sad but it is unnecessary to cry over spilt milk.

However, I would like to add that fishing up here for the real giants requires proper equipment and electric reels on trolling rods is built for failure, listen to us GUIDES, we know what equipment is required up here in the north! Luckily I had some extra rods with me and we could thus continue fishing. Shortly afterwards we could hook in another nice fish which after a really fun fight with several rushes down to the bottom and with good background music in the form of ACDC, the fish could be landed. The fish was measured to a lovely 152cm, and a really respectable PB could be stated.

On Saturday we had real dream weather! But fishing is fishing and unfortunately, the fishing gods betrayed us, and we could summarize very mixed fishing for our boats where some found decent Cod fishing and others could find some big Coalfish out on the slopes.

On Sunday we had a little wind, up to 7 m / sec but nothing that prevented our guests from getting out to sea, Our lovely gang in boat 7 with Ciggen and company steered the boat towards the mixflake and after a while they found a really nice area with lots of nice Cod in food size with some up to 12 kilos. In the other boats there was also action with a lot of fish up in the form of Plaice, Cod, Haddock, Coalfish, and a bunch of small Halibut.

Monday it was time for a long trip again, the focus was on Halibut and large Cod, Now in retrospect, I can say with a smile that we managed to tick this off during the day… It should also be added that during this week we also had a bunch of anglers from Germany in the guide boat, The son in the family is disabled and thus sits in a wheelchair, but for him it does not matter how big the challenges are, if you are a fishing enthusiast you are and should you fish!

Once in place, we could not do more than let go of our baits before there was contact with some Halibut, boat 8 reported a fish fairly quick just below the water, we found a Halibut in drift number two and after that it was as if the sea just died, difficult to put drifts in the strong current and no contacts made us spread out and some boats went on Cod and we in the guide boat aimed for big Coalfish. Those who drove after Cod got their slopes filled with fish in the 7 kilo class fairly immediately and we in the guide boat had a really nice Coalfish fishing with several up to around ten kilos. The guide boat also did some fishing for large Cod in the current and after a short while of wear and tear, we were able to land today’s top fish in the 20-kilo class!

Satisfied with that Cod and with the Coalfish fishing, we decided to make one last drift after Halibut and luckily we did as well as after a ten minutes, we hooked in a Halibut that could be measured to about 115cm, Simply a perfect end to a perfect day!

At the time of writing, the new guests are starting to roll into the camp and we are tagged to a thousand!
Tight Lines // Daniel Freland and Calle Hjelm