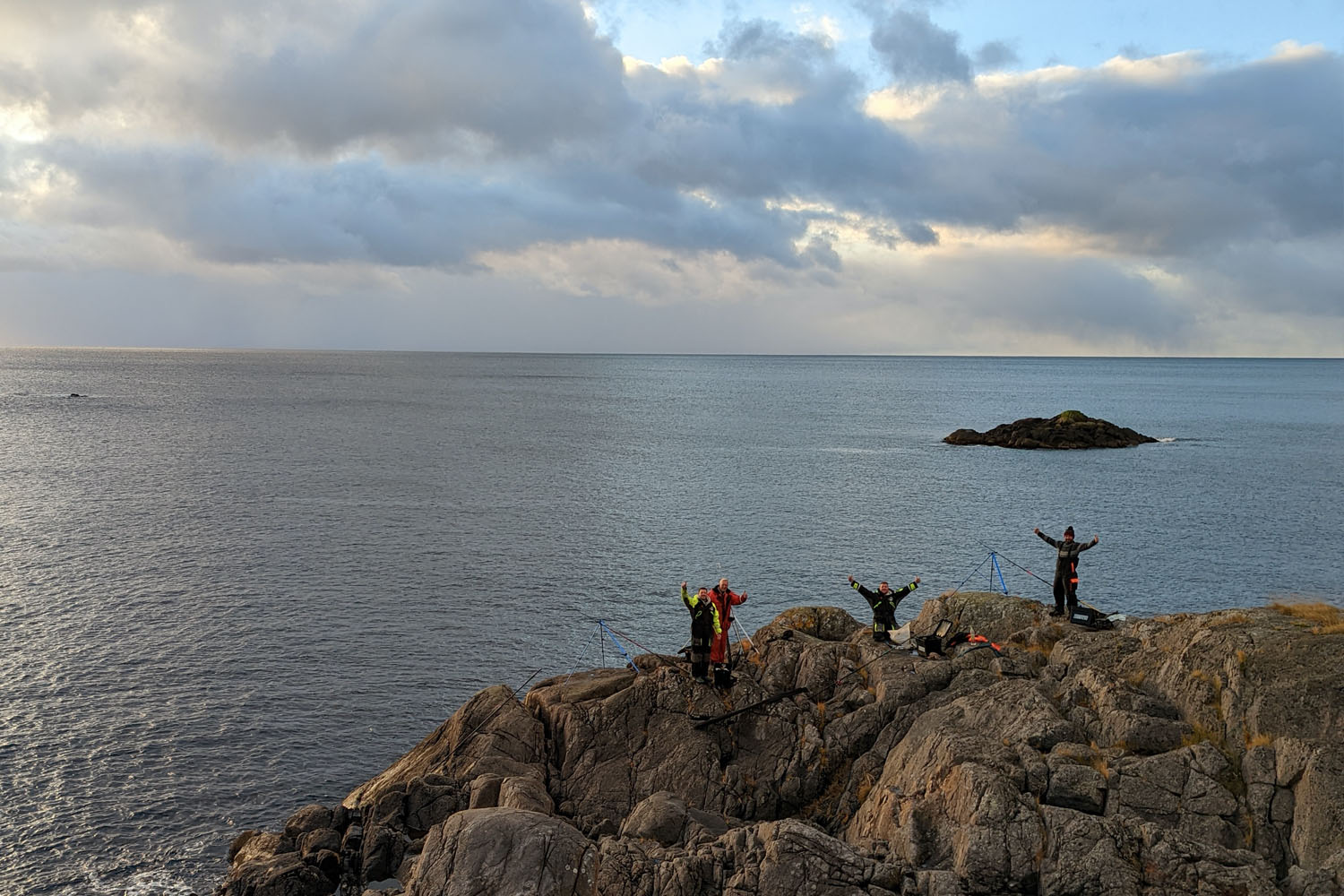 Well with today being my first official days shore guiding back in Norway since March, I was keen to get off to a flying start.

Unfortunately SAS put a downer on that one though, as 5 of my 7 guests didn’t arrive until early this morning due to flight cancellations. So fishing couldn’t get underway until nearly 11am!

The first mark was the bait station, which fished steadily for 3 hours. A sprinkling of Cod to 6-7lb, a nice Plaice and a number of Dabs and Coalies being caught.

From there we attempted to fish some ledges to the south of camp that Zac Harrow-Deitz had done well on during his first week, but that idea fell apart when we found the road closed due to re-tarmacking. Plan B it was to be and a split group between the bridge and the Reinefjord.

Both marks produced a ruck of small Coalies, providing the lads with plenty of action, but nothing of any size. That was until Paul hooked into something very large on the Reinefjord, which after nearly spooling him found a snag close in and busted him off. Seems to be a thing this year, with good numbers of big fish being hooked up and lost.

Tomorrow could be our one chance at a layby session, as the weather isn’t great during the prime tides, so we’ve got to give it a bash.

Well today was our only shot this week at the layby, so despite the tides still being a little on the small side, we went and gave it a good bash.

Fishing was relatively slow for the most part, but we did have three good takes during the session. Darren was first up, but as I watched his rod arch over, he was busy digging in his box. By the time he’d realised what was going on, the fish had unfortunately dropped the bait. 1-0 Halibut.

Second up was Shane just after the high water. A solid run which he connected to instantly. A good fight then ensued, before I could eventually chin the fish and take his prize up the bank to him. A nice fish of 103cm and around 20lb or so. 1-1.

Last action of the day came 5 hours later, just before the low water. This time it was my turn and it was a solid fish, going on two good runs before I could turn it and gain some line back. 5 long minutes later the fish came in to sight and it was a real gooden, easily over 50lb. As I passed the rod to my guest Steve so I could go down and chin it, I dropped the tip slightly and gave the fish 8″ of slack.

Very bad move, as it capitalised on my error and headed straight back to the bottom, this time much closer in amongst the boulders. Just as I had the fish moving up in the water again, I began to feel the horrible chaffing of the leader through my rod tip. I knew right then I was in trouble and two big head shakes later, it was game over. A second good fish lost in two days….gutted, 2-1 to the Halibut today!

Tomorrow we have some real weather coming in, so it’s a tuck in job on the south side. I’m in no doubt we’ll pull a few out though

Well what a miserable day today has been. 30-40mph chilly West North West winds and almost constant rain/sleet and hail from 7am until when we packed up. Yuk!!

Anyway, we started off at Mortsund, attempting to find a little shelter at the back of the venue, fishing towards the disused fish farm. This was slow going, with just the odd dab and small codling being caught, so before lunch, we decided to head back to the baitstation for the ebb tide.

Two of the lads decided they’d already had enough of a beating and asked to be dropped back at camp. The remaining members of the group fished on through the conditions.

Although nothing big came as a result of their efforts, the lads did manage good numbers of coalies to around 3lb, a dozen or so dabs to 1.5lb, a dozen or so codling, one plaice around 2lb and a single baby butt, Gwilym Farrar getting that one on his scratching rig.

The winds continue tomorrow, but the slight change of direction to a straight northerly gives us a few more options up around Svolvaer. Fingers crossed for a good haul

With the tides building nicely and some half decent weather, it’s amazing how quickly the fishing picks up.

Today was a fine example of that as the guys split into two groups and fished the Ice Factory and Kabelvag. Both marks fished nicely, with a nice mixed bag for the lads on Kabelvag. A few good fish were dropped there too unfortunately.

The other lads fishing the Ice Factory had a very nice haul of Cod, with both Paul and Shane nailing their first doubles from the shore at 11.7 and 10.8 as well as a number of other fish of 7lb and above. Nicely done lads!

Tomorrow, it’s a long trip up north to try out big fish venues again. Fingers crossed for a good result.

Today was the long trip up north to target some monsters at two of our favourite marks. With perfect weather and a good sized tide, you couldn’t ask for better fishing conditions really.

The lads had their chances too, with two big Halibut hooked and lost, one on each venue. Paul was first, getting a good fight from a biggun for the second time this week. Its crazy first run had us all excited, especially when Paul started to get a bit of line back slowly and the head shakes looked huge! As the fish took a blistering second run though, the rig body parted, leaving him gutted once again.

On the other mark, the lads had banked a few small Cod and a Coalie before a big butt took a shine to Gwilym Farrar ‘s bait shortly after it had hit bottom. Not being ready for it, he held on for dear life, trying to sort his drag out whilst getting pulled seawards. Unfortunately, before he knew what was really happening, it was game over….. his 28lb mainline parting under the pressure. Sometimes it’s just not meant to be…

A few other good bites were missed today as well, Steven Farrar dropping a suspected Halibut, before getting himself the best Cod of the week at 13.10..Well done buddy!

Last day for my first group tomorrow and hopes are high that more Halibut action is on the cards. We just need a big one on the bank now!

Every so often, you get those once in a blue moon sessions that’ll live with you forever. Today was certainly one of them.

The coalfish action was absolutely incredible, with over 50 double figure fish landed and a good few lost as well.

Each angler landed at least one double and top angler on the day Shane, had over 20 of that size to a best of 18.3. That would have been our new camp record had Steven not bettered him by an ounce with a belter of a fish at 18.4 earlier in the day.

In total, over a 6 hour session, over 100 fish were caught, mostly on light lure gear with one fish even caught on a popper….what a blast we had!

Aside from the coalies, the lads also hooked a dozen or so Cod to a best of 12.7 for Steve and a single Pollack of around 6/7lb for Shane.

I’m still a bit in shock as to what’s just happened to be perfectly honest, so I’m going to enjoy this moment with our weekly pizza and beer social.

Can’t wait to see what week 5 will bring now!