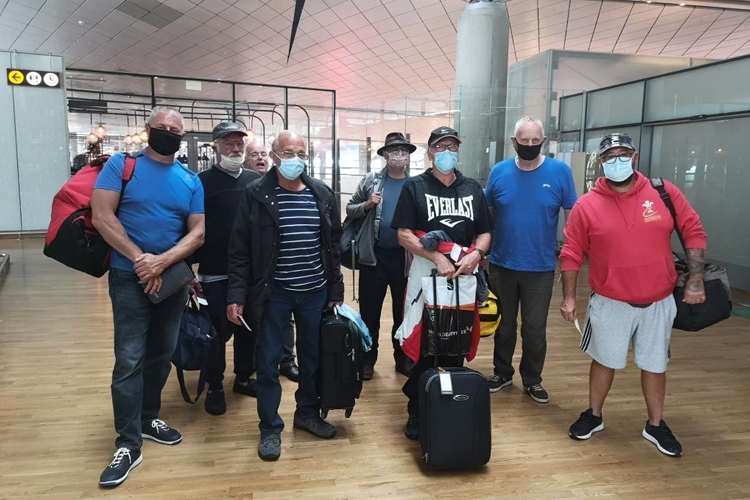 The second report has come in from Ross Johnson as he embarks on yet another hosted trip to Nappstraumen after the COVID lockdown that hit the world. Its lovely seeing happy customers with arms fulls of great fish. I’ll now hand it over to Ross to tell us his experience –

Its been an interesting first few days here in Havoysund. Day one’s forecast was for strong winds all day, but we did manage to sneak out for a 4-hour session in the afternoon. On my boat, we had a good number of small Haddock and Coalfish on small jigs and hokkai feathers.

We also had a spattering of small Cod and a small Wolffish.

On the guide boat, they had much the same, with exception to a nice Halibut for Leonard that took a liking to his orange tiger shad.

In complete contrast, day two provided us with some lovely weather from start to finish, allowing us to go further afield to an area known as Halibut alley.

It more than lived up to its name too, with both boats taking 5 Halibut a piece. On my boat, Ian was top rod for the day with 3 Halibut to 105cm. Hadrian was close behind with two fish to 100cm and poor Colin had a few moments of interest that never developed. He swears blind Ian was stealing his fish

The average size on the guide boat was a little better than ours, with three of their five fish going 120cm or more, with a best of 138cm for Greg. (roughly 75-80lb).

Tomorrow, we have some more horrendous weather arriving, so it’s likely to be another short evening session close to the camp. This time though, we’ll switch our targets to Plaice..

Another day of rain and wind meant that we could only get out for a for hours in the evening today. However, what we lacked in time, we made up for with fish.

The plan was to fish a bay to the north east of camp, sheltered from the strong westerly winds. After a 30 minute steam, we arrived and began drifting for our target species, which on this occasion was plaice. It didn’t take for Haidan to hook up, landing his first ever plaice at 54cm, a very fine fish. This was to set the tone for the next two hours.

In fact in total during this period, my boat had 15 plaice, six of which went over 50cm, half a dozen nice dabs and a number of small Codling. Here are the figures below:

Weather slightly better tomorrow, so we’ll see what we can pull out.

On day four, the main aim was to target halibut again. However, this was made very difficult as a result of the windy and rainy conditions, which forced us into limping across the bay to the west of camp to find shelter in the lea of an island.

After collecting bait fish, we drifted for hours without so much as a touch between the two boats, so a move was made to the north.

Halibut fishing was once again slow here, so rather than sticking it out, I took my group of three into some deeper water, where we enjoyed some good sport on the pirks, boating cod to around 8-9lb. The other boat stuck it out on the halibut grounds and on the last cast of the day, they were rewarded with a lovely fish of 153cm.

Tomorrow, the weather changes for the better once again and we are heading into halibut heaven. Let’s see what all this hype us about

This was the big one. A near 2 hour steam to the south east to halibut heaven. Everyone was very excited for this one.

First up was bait fish collection, which luckily took no time at all. 30 or so coalies caught in less than 20 minutes. Onwards we went.

On reaching the venue, we were a bit surprised to see around 6 boats already fishing, but I guess if there’s that many fish present, we’d still get into a few.

As it happens, we most certainly did. The first 7 drifts produced at least 10 good bites for my lads, but for one reason or another, they just couldn’t get a hook set to hold.

A few changes to the traces made, we carried on drifting the same bank and soon had more bites, but this time, the fish were hooking up well.

Over the next 5/6 hours, we experienced some of the best Halibut fishing we could have hoped for. 14 fish were boated in total, with all but two being over 1m in length. The best few went 133cm, 136cm and 144cm.

I even had a go myself with the popping rod and a 150g sandy Andy, with my best of 5 going 121cm. Great sport on relatively light gear.

With one day remaining, the lads have decided to have a go for Cod tomorrow up north. I think it’ll be a nice change to finish the week. Let’s see if we can find some monsters

We had some fine weather again for our last day in camp, so the plan was to venture up to the north Cape, the most northernmost point in mainland Europe!

Amongst the stunning mountains and huge flocks of puffins, here we would try one last time for a huge halibut. But as is always the case with these monster fish, it is all or nothing.

As it turned out, the lads on my boat got a little bored in the pursuit of monsters, so we changed tactics again, instead doing some pirk and shad fishing for cod and coalfish. This was a lot more productive, so when they had filled their boots once more, we moved to our last mark for the day, the plaice spot.

The last few hours were special once again, with around 20 plaice boated and returned as well as half a dozen dabs, some nice cod and a few haddock.

Sadly its now time for the lads to leave and make way for the next group, but I think they’ve all had a very enjoyable week. Until next time.

Tight lines and thanks for reading.

All we can say is WOW! What a weeks its been for Ross and our customers this week! Ross was on his a game this week when it come to putting anglers onto the fish!

Visit our Hosted Sea Fishing holiday page for even more info on our hosted trips. Alternatively, you can request a free brochure or simply call us today with any questions you may have.