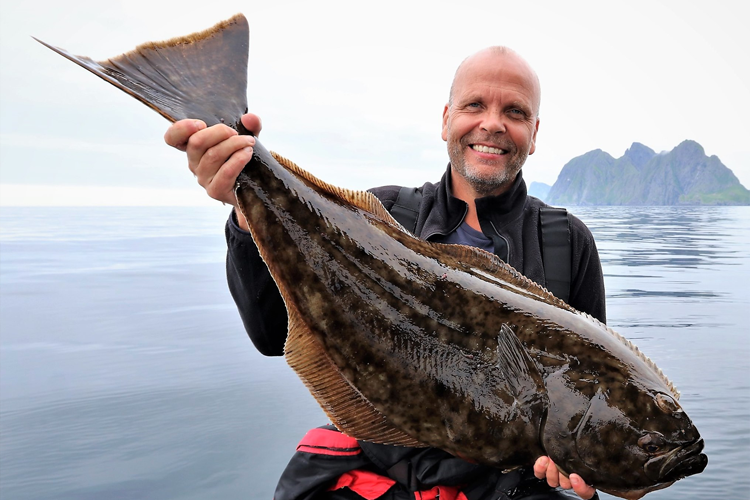 Another week, another group of keen anglers take on the waters of A. Yet again this water brought anglers their new PBs in the form of some great Halibut!

Now the season is finally underway for some of our foreign guests! Last week (Thursday) the first Swedish and German groups arrived here on Å, It feels so good to get started again after a very tricky and heavy year as for so many others.

Before going into this week’s results, we have a little more to report from last week when we had the Norwegian Institute of Marine Research here in place to do research on Coalfish. They were here to tag certain individuals with 2 different transmitters, one of which was satellite tagging of 10 individuals where they will be able to follow their journey through a year (if they are not caught or would die of other causes within a year). then Marked another 40 pcs with heat and depth sensors that will sit on until you simply get them up again.

Their job was done during the night Monday-Tuesday, and as possible made us have a day to spend on Halibut fishing to have some fun with. After a week of work fishing with only spin fishing in the surface, they still wanted to use spin equipment and we started the day by fishing shallow at a depth of 7-16 meters. Already in the 3rd cast we had a follower to the boat who took the jig rock hard 30 cm under the boat, unfortunately the line narrowed for Martin at this stage and the Halibut spat the jig and swam down again especially in front of our eyes.

Rigged up again and continue throwing, just minutes later we manage to hook and land the first hob which is just under 80cm which of course had to swim back as the minimum size that is allowed to take up is 80 cm. The day continued in the same spirit and we landed a total of 6 Halibut and unfortunately just as many dropped… of which 2 largest were similar at 110 cm in a double cut.

Now for this week’s groups who are struggling a bit against the wind, the week started in a completely magical way. Friday the 9th of July, the first fishing day for the new arrivals, everyone went out with a setting on a completely mirror-bright sea and about 20 degrees warm. For the veteran gang Jan, Bosse, Palle and Thomas who have gone to our camp Å every possible year, the day started with letting go of the bottom and two cranks later the first flounder was on the hook for Janne. They managed to land 5 Halibut between 75-98 cm during the day where the biggest activity was in the morning / midday. Later in the week, unfortunately, the weather has meant that we have been limited to fishing areas and also a little at the times we can get out, but that has not stopped Janne who managed on Sunday to pick up a new personal best of 153 cm Halibut that had to swim on after some quick photographs .

Our German guests have also fished a lot for Halibut and landed a bunch of nice fish between 70-100cm and a nice top fish of 122cm that was caught during the first day of their fishing.

The other boats have fished a little mixed fishing for Cod (when time and wind have been able to offer this) where they have managed to lure fine food fish between 5-10 kg some peaks up to 15kg. Otherwise, there has been a lot of fishing both with trolling and spin fishing in the surface where there has been really good action sometimes with the walk and fish have landed up to 14kg.

It will be exciting to hear if anyone else manages to lure up some nice fish out here for the rest of the week.

Now we all hope that Norway stays open and that we will see more of your guests in the near future, until then